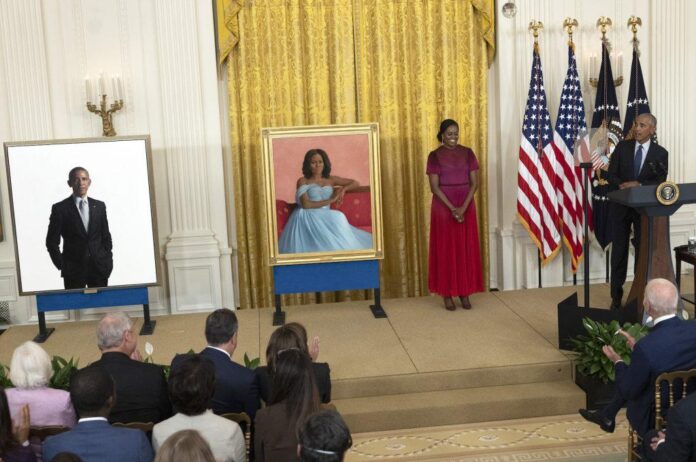 After years of delay, the official portraits of Barack and Michelle Obama have at last been unveiled at the White House. Though more outwardly traditional than the famed portraits of the Obamas done for the National Portrait Gallery by Kehinde Wiley and Amy Sherald, the White House portraits have their own backstories.

As with the NPG portraits, the former President and First Lady were personally involved in selecting the artist (with the help of Studio Museum of Harlem director Thelma Golden). Whom exactly the Obamas had selected was kept under wraps—the artists signed a confidentiality agreement upon taking the commission—so today also marked the reveal of more than just the images themselves, with the spotlight turning to the two newly famous portraitists: Robert McCurdy and Sharon Sprung.

As is customary, the White House portraits are sponsored by the White House Historical Association. To coincide with the big moment, the association unveiled a half-hour interview with McCurdy and Sprung on its website, where they explain the artistic choices that went into the paintings, what they were trying to achieve, and what it was like to work with the former President and First Lady. We’ve broken out a few of the most revelatory bits from the interviews below.

Robert McCurdy on His Painting of Barack Obama 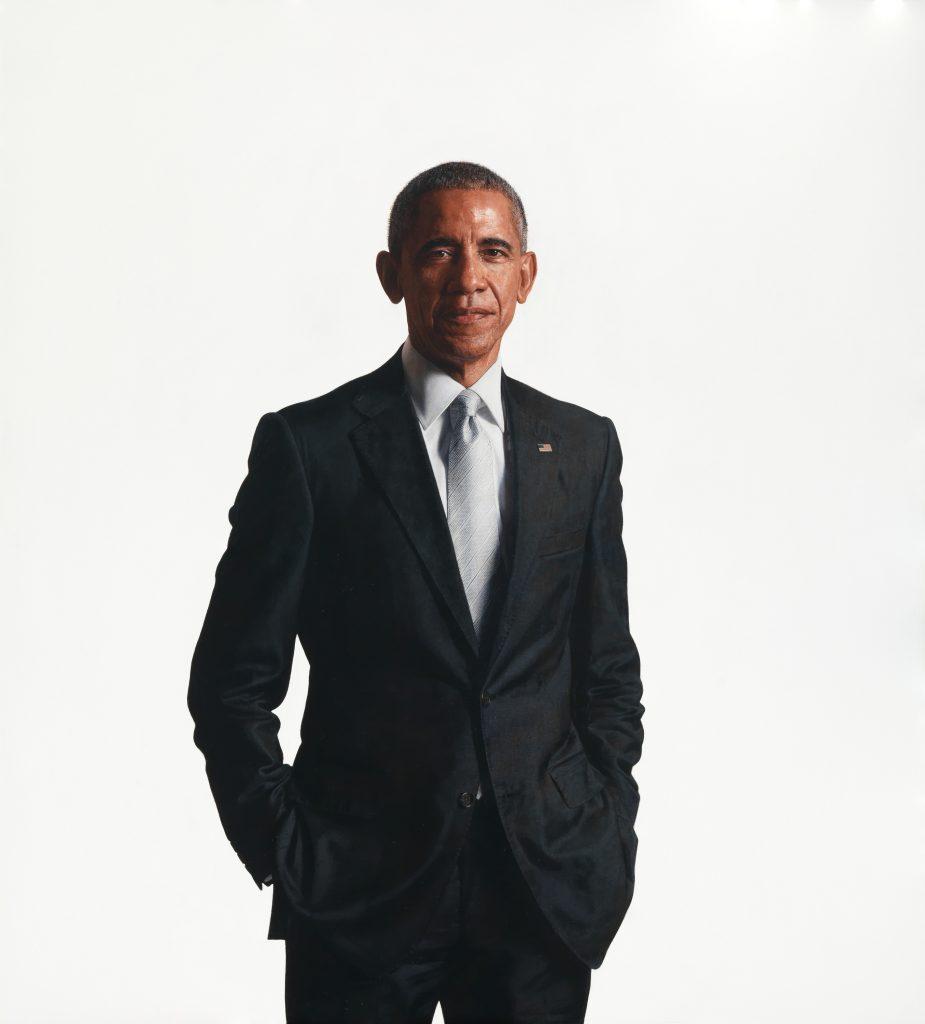 This official portrait of President Barack Obama was painted by Robert McCurdy in 2018. Courtesy of the White House Historical Association.

1) Barack’s Portrait Took More Than a Year to Paint

“I work on one piece at a time and there are no peripheral projects—it’s all I do for 12 to 18 months.”

2) The Official Name of the Work Is

3) The Sitting Is Involved

“The setup it quite elaborate. There’s a lot of lights. We fly an 8-by-8 butterfly in front of the lights, so that when you walk in it is a pretty big set. And then we make a mark on the ground, and as long as your toes are on the mark we’ve got you in focus, you need to hold your mark, look into the lens, and not gesture or move.”

4) The Source Photos Are Destroyed

“Everything associated with the photograph is destroyed—any prints, any negatives, anything. I actually did a sitting with [the author] Carlos Fuentes at one point, and told him this story, that when I was done with these images I was going to destroy them. He was so appalled by the idea that I would cut negatives that he said that he was going to make me a villain in one of his short stories.”

5) Obama Didn’t Get a Vote in How It Looked

“It is part of my process that the sitter doesn’t get to say anything about how the painting looks. They are completely out of the process. Everything that they are going to bring to the table they bring in the sitting. He was open to that and accepting of that process. He never saw the images we worked from, he never saw the piece in process, it was just, ‘This is the way it is going to be.’ He accepted that and I appreciate that.”

6) The Style Is Influenced by Conceptual Art

“Any artist reacts to the period where they enter the art world. I came in at the height of Minimalism and the Conceptual movement. And those are still enormously appealing to me. The problem with those forms for me was that there was an arbitrariness to it: Why does this piece look the way it does? While I thrashed around with that for quite a while, ultimately I thought of this idea of painting a person as being absolutely essential.”

7) McCurdy Was Trying to Remove Himself

“These things are painted that way for a reason: The less that I show my hand in the process, the easier it is for the viewer to get into the moment. So once I start interpreting the painting with gestures, or brushstrokes, or inflecting it with my hand, I start telling the viewer about how think about what is happening.”

“The paintings are stripped down for a reason. They have plain white backgrounds—nobody gestures, there are no props—because we are not trying to tell the story of the person who is sitting. We are here to create an encounter between the viewer and the sitter.

“[Barack Obama] had seen other work that I had done—I think the Toni Morrison piece jumps to mind. I think that directness really appealed to him.”

And Now… Sharon Sprung on Her Portrait of Michelle Obama 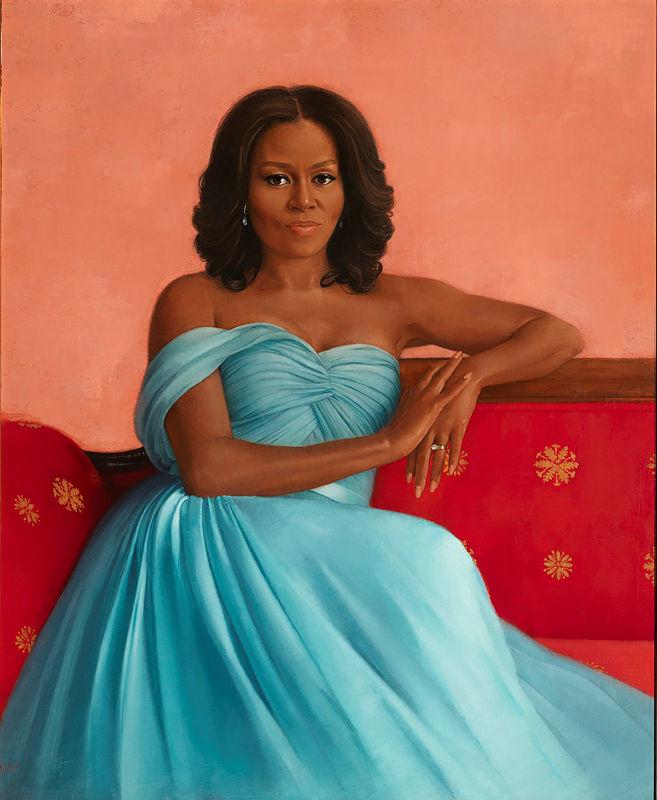 “I wrote two letters to [painter] Aaron Shikler.… He finally answered, and I went over to his house and he was somewhat helpful…. We later became more like peers, we had an acquaintance over the years. He asked me to model for him, which I didn’t do. And I also learned that portrait artists have bars in their studios, which I hadn’t anticipated. He had a beautiful studio and I was very impressed by his full bar.”

11) Barack Considered Her for His Own Portrait

“At the last minute [during the interview process], President Obama said, ‘Well, why can’t a woman paint him?’”

12) Thelma Golden Was Key to the Selection

“Thelma Gold [sic] was in the room [during the interview]. She was helping with the portrait selection. So during all this, she asked me, ‘Why do you paint, Sharon?’ And then at that point I just went still and I had to gasp for air a little bit… you know you are about to reveals something that you don’t know if you want to reveal to the public. Tears started mounting in my eyes, so I started crying. That’s how it went.”

(Sprung elaborated to the on what she told the Obamas: “I said that my father had died when I was 6, and all the photographs were destroyed. So I had nothing of him that was left, and remembering his face, and other people’s faces, was so embedded in my being, that that’s why I’m a portrait painter.”)

13) Michelle Was Hands Off

“The first time I was going to photograph her and talk with [Michelle Obama], I asked her what her thinking was—what did she want? She said, ‘I have been so busy, I don’t even know’…. It was good because I felt this trust come from her that, ‘You do your thing, I do my thing, I’m going to trust you with your thing.’ And I think portraiture works better like that. She didn’t contribute that much other than to present herself.”

14) The White House Furniture Had to be Moved

“I had them move furniture from the Red Room to the Blue Room because the light was better. So that caused a bit of a disturbance at the White House…. Well, they didn’t let me touch it. So that was a whole big thing.”

15) Originally It Was a Standing Portrait

“I was going to do her standing to give it a certain dignity. But she doesn’t need dignity. She has so much dignity that I decided to do it sitting, just because it was too much looking at her—I’m that much shorter than her. I wanted to be at her level or a little below.”

16) Michelle’s Stylist Had a Hand

“Her stylist rearranged her clothes in a really becoming way, and that just clicked.”

17) The Dress Was the Hardest Part

“The dress, it was hard—the color was so beautiful and I really wanted to get the strength of the color and the light.”

18) It Took Eight Months to Paint

And I knew it was done when she stated to breathe. That’s my goal in portrait paintings—it’s when the person starts to be alive to me and I can interact with them. Then I know I am close.”