Home News A bold Berlin Biennale proves it is not afraid to address some... 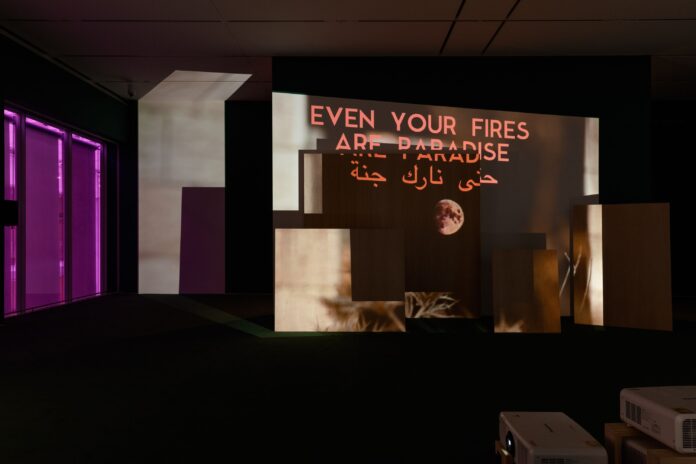 At the press preview for the 12th edition of the Berlin Biennale, which opens tomorrow (until 18 September), the head curator Kader Attia told viewers that when planning the show, a question came to his mind. “Without pretending that an art exhibition can change the world, how could we contribute to just slightly reorient the perception of the world?” the French-Algerian artist asked.

His answer is the biennial’s most boldly historical and politically charged edition yet, one which appears to take its vision from the words of the writer James Baldwin: “Artists are here to disturb the peace. Otherwise, chaos.”

To achieve this, Attia has worked closely with an international curatorial team of women, including Ana Teixeira Pinto, Do Tuong Linh, Marie Helene Pereira, Noam Segal and Rasha Salti. With 70 artists and collectives displaying their work across six venues, the exhibition Still Present! doesn’t shy away from necessary and often uncomfortable discussions. And placed centre stage is the role of capitalism in global strife, with a particular focus on decolonisation and the climate crisis.

Founded in 1998, the Berlin Biennale is the German capital’s foremost art exhibition, second only in the country to the quinquennial Documenta. The latter, which is set to take place on 18 June, is grappling with a row over claims of antisemitism and anti-Palestinian racism, as well as vandalism and death threats on a Palestinian artist collective exhibiting there.

In the shadow of this fallout, the question on everyone’s lips is how a German art exhibition can reconcile the theme of decolonisation with the elephant in the room: Palestine. The answer, it seems, is to not avoid it. Indeed, the charged topic is addressed head on by a number of artists in the show, including the Palestinian-American duo Basel Abbas and Ruanne Abou-Rahme, Israeli-born Dana Levy and the collective Forensic Architecture, which is led by the Israeli-born architect Eyal Weizman.

Abbas and Abou-Rahme’s work Oh Shining Star Testify is a three-channel video, two-channel sound installation composed of CCTV footage taken from an Israeli military surveillance camera. On 19 March 2014, the 14-year-old Yusuf ­Shawamreh crossed the separation fence erected by the Israeli military to forage Akoub: an edible plant that is a delicacy in Palestinian cuisine. After crossing the fence, Israeli forces ambushed and shot him dead.

Meanwhile, Dana Levy’s work connects the political occupation of Palestinian lands to ecological decay. Her piece consists of documents, photographs and maps which look at the blurring of the Green Line—the armistice line that separated Israel from the West Bank and East Jerusalem before the 1967 war.

And Lawrence Abu Hamdan’s Air Conditioning is a panoramic digital print for which he has painstakingly compiled details of Israeli military surveillance over Lebanon during a 15-year-period. The result is rows of ominous cartoon-like clouds in black and grey against a sky-blue background. Each day is represented by 1cm of the work, with each year written on the floor in front.

The Beirut-based artist achieved this work by feeding data through a 3D animation software that makes artificial cloud formations for video games and films. The result is a synthesis of data journalism, policy research and art. In creating it, he reimagines a natural space turned into a “militarised, produced environment that you live underneath”, he says. One that is both a physical and ecological threat. “The height of the cloud depends on the number of planes that were in the atmosphere on that day,” Abu Hamdan adds. “The thickness of the cloud, the kind of blooming of the cloud, is created by how long they spend in the atmosphere”.

Across town at the KW Institute for Contemporary Art, a diminutive topless sculpture by the Sri Lankan artist Deneth Piumakshi Veda Arachchige depicts a brown woman is holding a skull. Draped in a blue and white sarong printed with blossoms, she looks straight ahead and appears frightened. Scrawled in German across her breasts are the words “Chest colour slightly darker than VII” and “Weddas [a Sri Lankan indigenous minority] of fairly pure-blood”. According to Arachchige, who 3D printed herself to make the sculpture, these were the terms used by scientists to categorise, objectify and value brown bodies. At a time when statues and monuments are being toppled and questioned throughout the West, Self-Portrait as Restitution challenges dominant, deep-rooted narratives around identity.

Within his own artistic practice, Attia focuses on the concept of repair. “I am often asked: What comes after decolonial thinking? Frankly, I’m less concerned with what comes next than with the fact that this is an ongoing conversation in the here and now,” he said in a statement.

Similarly, the Berlin Biennale succeeds by provoking intellectual engagement with what’s wrong with the world and why, demonstrating artists can and must disturb the peace, otherwise, as Baldwin said, “chaos”. But, as Attia prefigured with his initial curatorial question, how these changed are manifested remains to be seen.