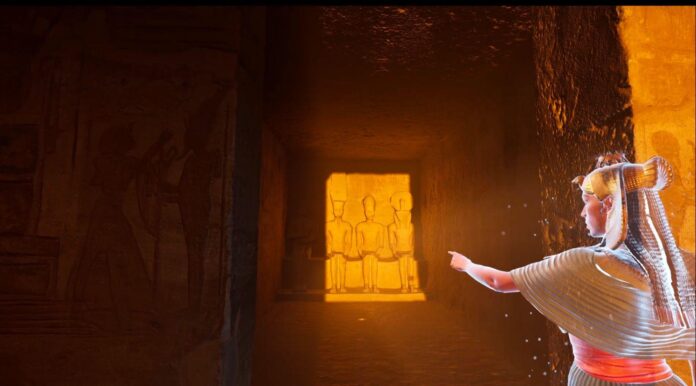 Off the central court of the de Young Museum in San Francisco, a large room is filled with what look like mid-century egg chairs—they are actually Positron Voyager virtual reality (VR) pods. Here, after an attendant fits you with heavy VR goggles and headphones, you sit back and wait for the ride to start. “Ramses & Nefertari: Journey to Osiris” is a 10.5-minute VR experience that sweeps you through the desert and monuments of ancient Egypt. It has been a popular sideshow of the museum’s blockbuster exhibition Ramses the Great and the Gold of the Pharaohs (until 12 February), which boasts some 180 Ancient Egyptian treasures.

Your “guide” on this journey is an animated Nefertari, beloved queen of Ramses II, the king who reigned between 1279 and 1213 BCE and is known as the Pharaoh of Pharaohs for his military conquests and construction of cities and grand monuments. In this virtual afterlife, Nefertari can miraculously fly, transcend time and speak English (with a stilted accent). She takes us to Abu Simbel, the temple fronted by four colossal statues of Ramses II. “Ramses built this temple as a monument to himself and his grand accomplishments,” she says. “I admit, he could be a little vain at times.” Then we zip to the magnificent tomb he built for her, with chambers upon chambers decorated with colourful hieroglyphs. The chair tilts and shakes just enough to give you a sense of moving through space with her, and certain smells are at times released.

Both the exhibition and the VR experience have been put together by the Florida-based World Heritage Exhibitions, whose parent company is Singapore-based Neon. “We partnered with the Egyptian government and their antiquities council and made an arrangement to take the artefacts on a tour,” says Peter Hall, operations manager for World Heritage. “In our agreement, we share proceeds from the exhibition to fund current research and excavations and conservation efforts at archaeological sites in Egypt.” The exhibition itself is pricey enough ($35 for adults), and the ride costs a separate $20 fee. Hall says he cannot reveal how many visitors have taken the ride; the museum projects a total of about 300,000 visitors to the exhibition by the time it closes, making it one of the de Young’s most popular exhibitions in the past decade.

At the museum, the exhibition was shepherded by Renée Dreyfus, its longtime curator of ancient art. She handled two previous King Tutankhamun exhibitions that came to San Francisco, and when she learned about the Ramses II exhibition going on tour, she says, “I thought that was a brilliant idea, because there hasn’t been an exhibition in America about Ramses in over 30 years—and that show never came to San Francisco. I realised the time was right for there to be a re-evaluation of Ramses.”

Dreyfus was able to see the exhibition at its first American stop, the Houston Museum of Natural Science, and was able to add material such as “more didactics and wall panels so that the exhibition would be more coherent”, she says. For example, “why are the animal mummies in the exhibition? Because we wanted to talk about kingship and the gods and the people’s relationship with the gods.”

After the exhibition closes in San Francisco it will travel to La Villette in Paris (7 April-6 September), where the immersive VR experience will also be on offer. “We believe that these VR chairs are the perfect complement to an exhibition,” Hall says. “We really view this as the future of how we’re going to exhibit cultural artefacts, where you can see these pieces [nearby] and then you can come here and bring those pieces to life and put them in context in a way that you never could just with a video.”

Russia’s Ambassador to Unesco Has Resigned, Clearing the Path for the World Heritage Committee to Resume Work