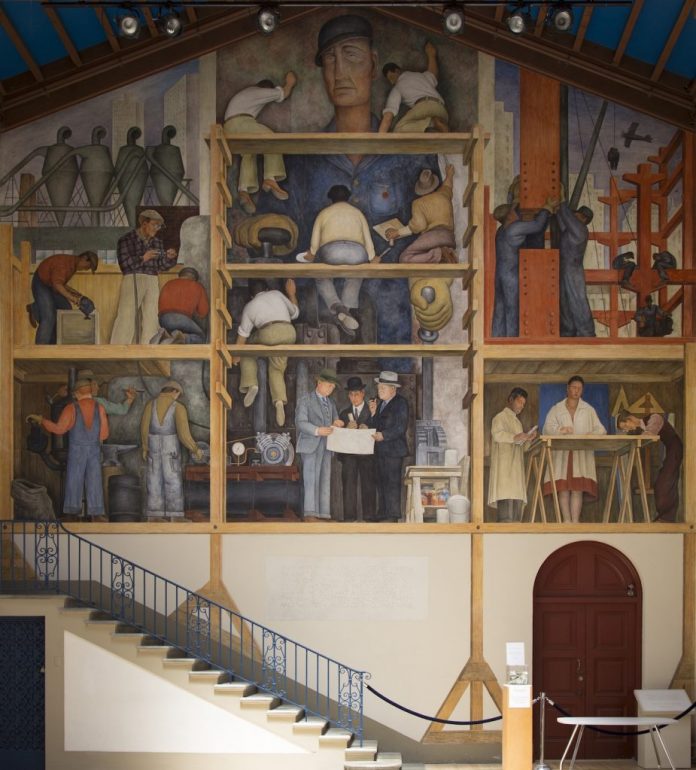 The San Francisco Art Institute is about to sell one of its most valuable treasures. Over the past several years, the institution has faced serious financial difficulties. The institute’s vice president Jennifer Rissler published a letter in December stating that the institution had “tried all options to save it,” but the sale of the large-scale Diego Rivera fresco was the last remaining option.

The famous Mexican artist completed the mural in 1931. For decades, the work, depicting workers, adorned the institute building and became a real landmark in San Francisco. The mural is now valued at $50,000,000. A potential buyer is director George Lucas, who is building his own museum in Los Angeles. Other museum employees considered the decision controversial. According to them, it is too early to talk about selling the mural. However, the news has already managed to cause a public response. Many San Francisco residents considered the sale of a valuable work of art that has graced their city for decades “criminal”.

Diego Rivera and his wife Frida Kahlo, known for helping to found the Mexican mural movement and spreading the social style around the world, are Mexico’s most famous artists. The city of San Francisco is actually home to three of Rivera’s most important works, each in its historic city institution, as well as many other murals inspired by him, including murals inside the Coit Tower and many street murals of the Mission District. All Diego Rivera murals are open to the public free of charge.

In 2016, the institute’s management took out a bank loan to build a new dormitory building against the old campus building and 19 other works from its collection, including a mural by Rivera. The debt could not be repaid; the pandemic year only worsened the situation. In October 2020, the University of California Board of Trustees came to the rescue, buying out the institute’s debt and becoming de facto owner of its buildings. The S.F.A.I. has six years to reclaim its buildings and its independence. And for the sake of that, extreme measures, such as the sale of the mural, can be taken.

“Creating a Mural” was one of Diego Rivera’s first works in the United States. It is essentially a “mural about a mural”: the Mexican muralist depicted artists painting a mural about the creation of a city; the central figure of the artist, sitting with his back to the viewer with a palette and brush in his hands, is an image of the author himself. The composition is valued at $50 million.

A final decision on the sale has not yet been made. Many S.F.A.I. faculty and students are protesting management’s plans to sell Rivera’s mural. Institute officials are considering all possible scenarios: whether the painting on the building can be preserved, and if it can be sold, to whom. In December, there was a rumor that Rivera’s work wouldn’t mind being bought by film producer George Lucas for his Narrative Arts Museum in Los Angeles. Another potential buyer is the San Francisco Museum of Modern Art: so there is a chance to keep the mural on the building, making it a branch of the SFMoMa. 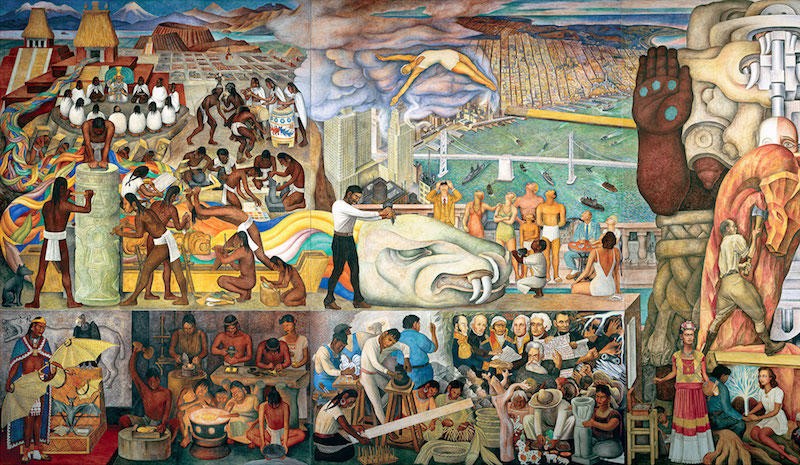 This giant piece (22 feet tall and 74 feet long), painted in 1940 for the Golden Gate International Exposition, is a monument to the unity of the Americas and was one of the centerpieces of the exhibition. The mural dominates the lobby of the theater building at City College of San Francisco, easily accessible from Union Square by the BART or Muni subway. This mural is considered one of the most important works of art in the Bay Area because of its extensive study of North and South American history, art and culture, including local and European perspectives.

“The Making of a Mural” at the San Francisco Art Institute 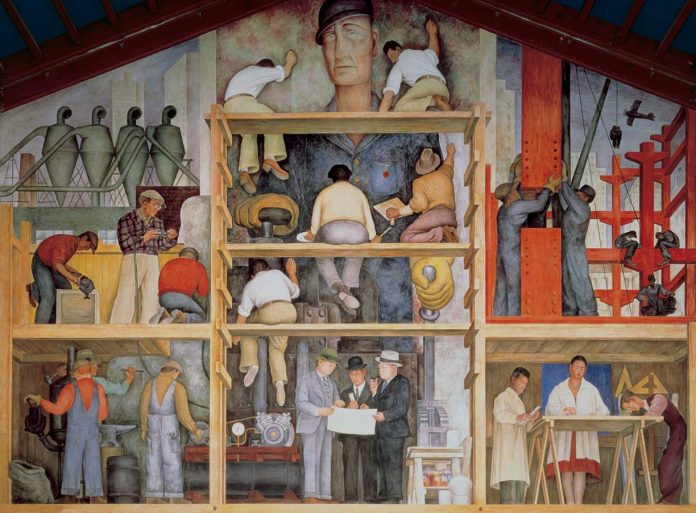 This six-section mural takes up an entire wall of its own gallery at the San Francisco Art Institute, one of the nation’s oldest and most respected art schools. The mural depicts a painting of a mural within a mural, which in turn depicts the construction of San Francisco itself. This major work by Diego is right between North Beach and Fisherman’s Wharf, a short walk from either, and is easy to add to the sightseeing. The Mural Making was painted at the school itself by Rivera in 1931.

“Allegory of California” at the Pacific Stock Exchange 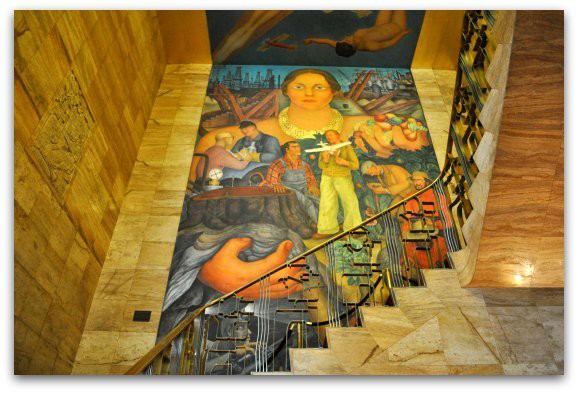 Representing “Califa,” the sacred spirit of California itself, Diego Rivera’s “Allegory of California” adorns the wall and ceiling of the grand staircase inside this historic stock trading building in the heart of the financial district. Within walking distance of Union Square and all points of the city, the mural was controversial when Rivera painted it in 1931 because his decidedly left-wing politics were not well-received by the capitalist traders of the time. The mural depicts various industries in early California, including gold mining and oil drilling. 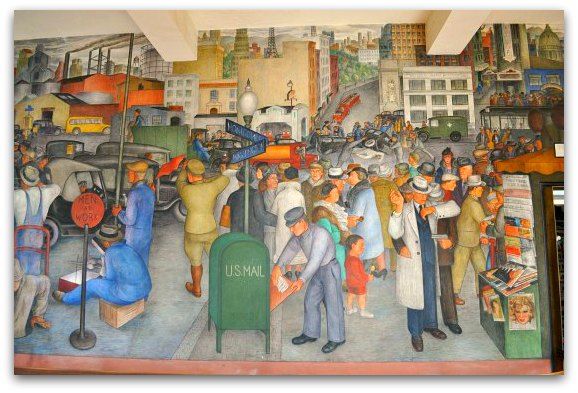 Although not done by Diego Rivera himself, the murals that adorn the interior of Coyte Tower on Telegraph Hill were completed in the 1940s by a group of muralists who considered Diego Rivera their mentor. Located in the lobby and on the stairs, the murals are strongly socialist in context and depict the struggles of workers around the world against the corrupt government. Look for the newspaper in the “Library” mural, which has a headline story about the destruction of Rivera’s “Man at the Crossroads” mural in New York City.

The mural was destroyed because it depicted Lenin.

San Francisco is one of the cities that played a huge role in the work of the Mexican muralist Diego Rivera. In 1930, Rivera and his wife Frida Kahlo were invited to San Francisco by Timothy Ludwig Pfluger, one of the architects who gave San Francisco its unique appearance. Rivera was commissioned to paint the wall and ceiling in the City Club, on the tenth floor of the Pacific Stock Exchange building. The entire building is a classic example of American modernist architecture (designed by Pfluger himself). Rivera’s Allegory of California mural in the City Club was a great addition.