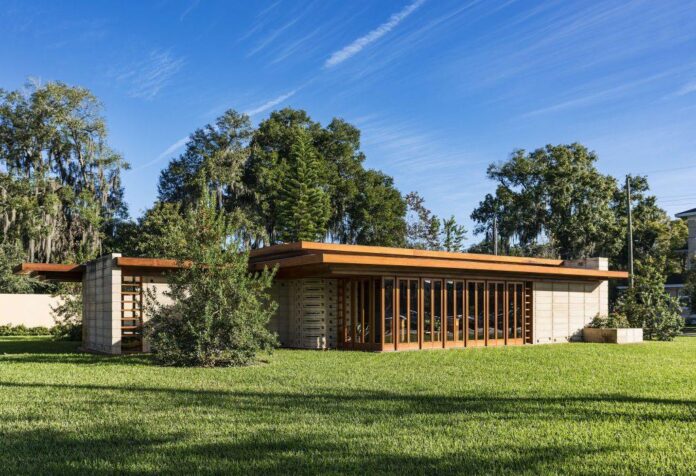 The Fawcett Farm, a restored Frank Lloyd Wright home in California’s Central Valley just hit the market with L.A.-based Crosby Doe Associates for $4,250,000. It’s a whopping ask compared with other Usonian homes by the famed architect on sale this fall, including one in upstate New York asking $1.5 million and another in Wisconsin going for $725,000.

Ronald Reagan, however, gave a stump speech during his gubernatorial run at this storied site.

“Fawcett Farm”
Wright produced the design in 1955, and the home was built in 1961—two years after Wright’s death in 1959. House was restored in 2012 by Eric Lloyd Wright and Taliesin Architect Arthur Dyson.
Los Banos, California
📷 Jim Simmons#JuevesDeArquitectura pic.twitter.com/X6OMgWIGLn

In 1944, Stanford football star Buck Fawcett turned down a draft with the Chicago Bears to care for his family’s farm. His father, a founder at Producers Cotton Oil Company, had fallen ill. Fawcett commissioned Wright to design this home, situated on 76 acres at 21200 Center Ave. in Los Banos, California, after the two met while Fawcett was taking an architecture class at Stanford.

Upon seeing photos of the site, Wright famously said, “Not much beauty there.” Fawcett retorted, “Actually, Mr. Wright, the Central Valley of California contains the most fertile agricultural land in the world, and you should consider it an honor to build a house there!”

Wright finished designing the Fawcett Farm in 1955, making it among the last structures the architect envisioned before his death in 1959. It was erected posthumously in 1961, a utilitarian emblem of his distinct, organic architecture. “We have no longer an outside and an inside as two separate things,” Wright once said. “They are of each other.”

To that end, the Fawcett Farm’s listing says “the residence and surrounding gardens afford an island of peace rising from the crops and merging with the distant mountains on the far horizon.” Meanwhile, Wright oriented the house’s direction to shield it from the valley’s heat and wind while offering sweeping views of coastal mountains to the west.

According to the NY Post, Fawcett remained the property’s sole owner until his death in 2009. New owners, a couple, scooped it up in 2012 and employed Wright apprentice Arthur Dyson to restore the space. With consultation from the architect’s grandson, Eric Lloyd Wright, they re-groomed the landscaping and gardens—and beefed up security.

Their work won a 2019 award from the California Preservation Foundation, selected by a jury of top architects, engineers, and journalists—with an eye beyond urban centers.

“It’s probably the only real farmhouse [Wright] did,” Dyson told Eichler Network following their accolade. “The only one in California at least.”