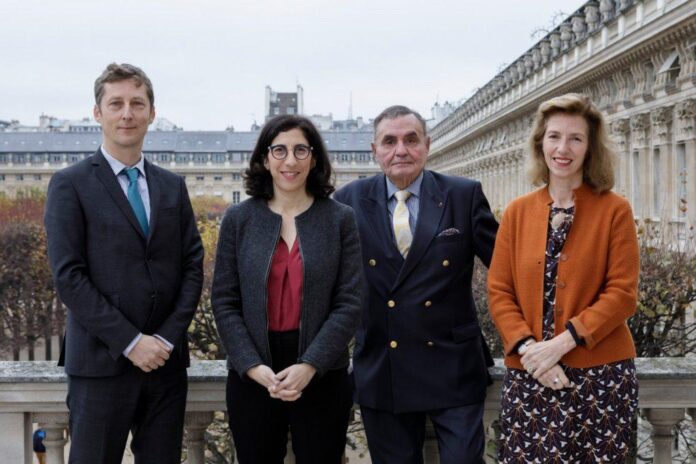 France’s ministry of culture has published a lengthy report advising French museums on how to avoid acquiring trafficked artworks. The report, published on November 21, argued that the country’s reputation and cultural influence were at stake, particularly in a busy international art market where competition—notably from their Anglo-Saxon neighbors—is strong.

Culture minister Rima Abdul-Malak commissioned the special report in June, during an ongoing scandal involving the indictment of the Louvre’s former director, Jean-Luc Martinez, and curator Jean-Francois Charnier. Both were charged with “complicity of gang fraud and laundering,” in the acquisition of suspected looted antiquities from Egypt, which were purchased for over $50 million by the Louvre Abu Dhabi. In February, a French court will decide whether to drop those charges.

The investigation has cast a shadow on France’s top cultural institutions and agencies, which it likens to diplomatic envoys, and thus is integral to maintaining the country’s economic clout. The development of the Louvre Abu Dhabi museum was as much an exercise in international relations as an artistic exchange. Its collection was fashioned by the France Muséums consultancy firm.

The report titled “Improving the Security of National Museum Acquisitions” makes it clear that although “zero risk doesn’t exist,” ensuring similar fiascoes don’t happen again should be a top priority for the state.

“In other countries endowed with a large art market or major museums, a museum’s unfortunate acquisition has little other consequences than the restitution of the artwork by the private museum, and legal procedures for obtaining reimbursement (It’s the case in the U.S., for example),” notes the report. [The U.S. reference may pertain to the return of looted artworks by New York’s Metropolitan Museum of Art as a result of the same art trafficking investigation that implicated French museum workers.] “In France, on the other hand, it’s the State’s reputation that is damaged by the same situation,” reasons the report.

The report sketches a current context for the concern about art trafficking as competition within the global art market, and “between major countries in terms of their cultural influence, is particularly harsh.” Added to the mix are rising demands for restitution, and the “European reconfiguration” due to Brexit, of the once “growing domination of Anglo-Saxon public auctions,” warns the report.

In short, effective “reaction is necessary to guarantee the capacity of France’s influence,” to “increase trust in the French market,” and to help in the fight against money laundering and financing terrorism, both of which are interconnected to the sale of looted art, note the report’s authors: museum and art market experts Marie-Christine Labourdette, Christian Giacomotto, and Arnaud Oseredczuk.

The trio interviewed more than 60 art professionals before coming up with 42 recommendations, which the ministry of culture told Artnet News it was acting upon swiftly.

“On our end, we have already started to move forward with certain recommendations, which will be applied as early as 2023,” said a ministry spokesperson. The other government ministries referenced in the report, which calls for a wide-reaching, concerted state effort, also “showed that they are aware of the stakes,” added the official.

The over 70-page document, reviewed by Artnet, doesn’t focus on one single incident but delves into how art is acquired and offers means to check and balance that process. It advocates for a more unified, “collegial” approach to acquisitions, allowing for varying views—from both within and outside museums. For example, establishing a special provenance and acquisition unit comprised of individuals from several government ministries, law enforcement officials, and art workers. In that vein, the report says that access to police records on the sellers of artworks should be more accessible and digitalized.

Other advice includes new modes of training and education within the ministry of culture: a new master’s program on provenance studies at the Ecole du Louvre is one original suggestion.

Researchers also criticized current, lax criminal sanctions for improperly handling provenance information, especially in an unregulated market, where it can be common to do the minimum to verify an artwork’s origin—a process which in itself is unclear and unsystematic, states the report. It argues for the reinforcement and clarification of acquisition rules, with a new “methodological and deontological framework,” that integrates recommendations from the OCBC (Office Central de lutte contre le trafic des Biens Culturels), France’s art trafficking investigative unit.

New checks and “certificates of integrity” that demonstrate expertise, particularly related to provenance and authenticity for the purpose of public sales, are also on the agenda. Other recommendations include: establishing an alert system when there are doubts about an object’s origin; a modernized export certification process; greater transparency on public sales; and new recruits at the under-staffed OCBC.

Is This Scholarly British Art Professor the Real Banksy? Students on His Campus Certainly Think So