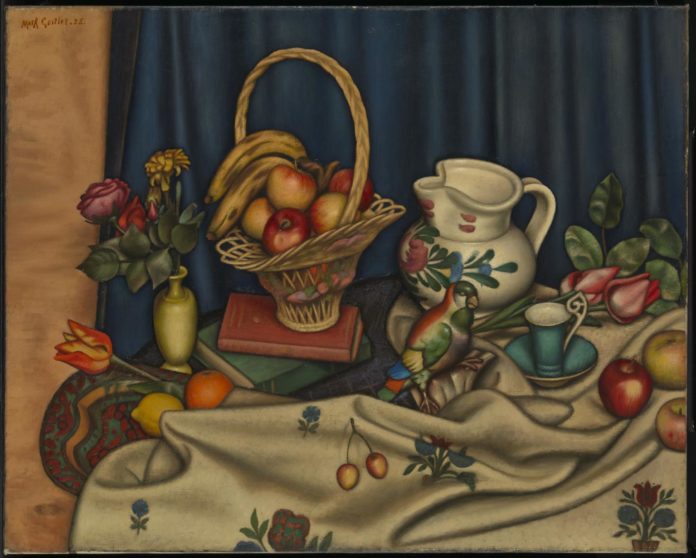 A major new exhibition at the Scottish National Gallery of Modern Art this winter reveals the remarkable yet relatively unknown response of Scottish artists to the development of modern art in the first half of the 20th Century.

A New Era: Scottish Modern Art 1900-1950 examines the most progressive work made by Scottish artists as they absorbed and responded to the great movements of European modern art, including Fauvism, Cubism, Surrealism and Abstraction.

More than 100 paintings, sculptures and works on paper by over 50 artists are on display from 2 December until 10 June next year, drawn from private and public collections from throughout the UK.

The Parisian adventure of Fergusson and Peploe (both of whom were working in the city by 1910) had a profound impact on their painting, reflected in works like Fergusson’s Étude de Rhythm (1910) and Peploe’s Tulips and Fruit (1912). The former is a daring, provocative image of figures in motion, viewed from several perspectives at once, which almost certainly depicts the act of sexual intercourse. The bold new technique adopted by Peploe, characterised by a use of vivid colour, proved so shocking when he returned to Edinburgh in 1912 that his dealer refused to show his new paintings.

Eric Robertson (1887-1941), who served in the First World War, drew upon his horrific experiences to create remarkable paintings such as Shellburst (1919), which conveys the power of explosions he witnessed, the scale of their destruction and the vulnerability of the soldiers caught within their range. In this extraordinarily advanced painting, Robertson combined the rhythmic whirls of the Futurists with the simplified forms favoured by Vorticists, a British group that explored similar themes, creating a powerful image both frightening and controlled.

Although they maintained close links with Scotland, a number of leading Scottish modernists lived in London during the 1920s, among them Agnes Miller Parker (1895-1980), her husband William McCance (1894-1970) and William Johnstone (1897-1981). The simplified, partly mechanised forms that appear in works such as Miller Parker’s The Horse Fair (1928) and McCance’s Heavy Structures in a Landscape Setting (1922) demonstrate how deeply engaged these artists were with developments in Europe. In Scotland, artists including Beatrice Huntington (1889-1988) and William Crozier (1893-1930) were applying the lessons of Cubism to portraiture and the Scottish landscape, as seen in A Muleteer from Andalucia, (c.1923) by Huntington and Edinburgh (from Salisbury Crags), (c.1927) by Crozier.

During the Second World War, Glasgow became the centre of Scotland’s progressive art circles, seeing the arrival of European artists, including Polish painter Jankel Adler (1895-1949), and the establishment of art clubs and other initiatives. Some Scottish artists however moved to England and greatly prospered, such as Robert Colquhoun (1914-62) and Robert MacBryde (1913-66) in London and Margaret Mellis (1914-2009) in St Ives. Mellis became a key figure in the emerging St Ives School, as seen in her Relief Construction in Wood, inspired by her friendships with Ben Nicholson (1894-1982) and Naum Gabo (1890-1977). She was later joined in Cornwall by Wilhelmina Barns-Graham (1912-2004), who emerged as a pioneer of British Abstraction, as seen in Upper Glacier, 1950.

Barns-Graham was part of a new generation of Scottish artists who came to the fore after the war, which included Davie, Paolozzi, Gear and Gilbert. Paolozzi exhibited at the Venice Biennale in 1952 while the latter two were the only British members of the cutting-edge CoBrA movement. Gear’s radical abstract painting Autumn Landscape was purchased by the Arts Council from the Festival of Britain Sixty Paintings for ’51 exhibition, causing a furore. By the time the Scottish National Gallery of Modern Art opened in Edinburgh in 1960, Scottish artists were at the forefront of European contemporary art.

Simon Groom, Director of the Scottish National Gallery of Modern Art, said: “A New Era reveals, for the first time, the role of Scottish artists in the development of progressive art during the first half of the twentieth century. It shows the extent to which Scottish artists were inspired by, and prepared to engage with, the European avant-garde, and its impact upon their work. Bringing together over 100 works by over 50 artists, the show offers a fascinating view of art at a time of tumultuous change”.