Home News A Record Number of Museum Buildings Opened in 2021, and 6 Other... 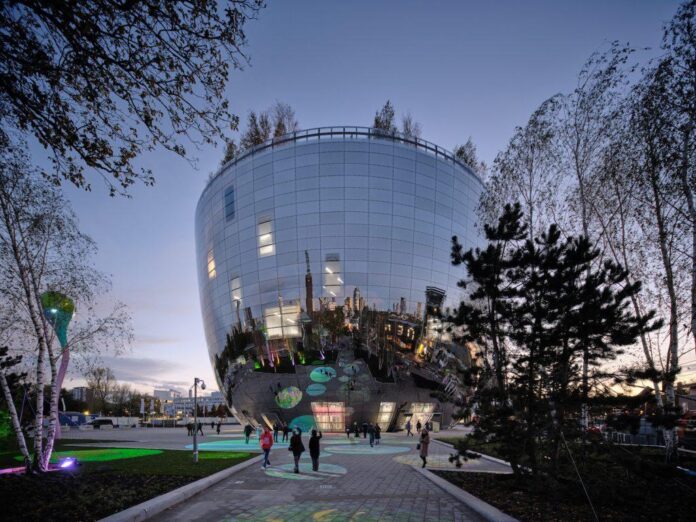 Given the worldwide impact of the coronavirus pandemic over the past two years, it may come as a surprise that so much money continued to flow into ambitious museum building and new cultural projects around the world. But the latest edition of Cultural Infrastructure Index, an annual report undertaken by AEA Consulting, shows just that.

The report, now in its sixth year, measures investment in capital projects in the cultural sector around the world, which must have a budget of $10 million or more to be considered. The study found that after a predictable dip in 2020, due to broader pandemic lockdowns, 2021 showed an extraordinarily robust rebound in new buildings and projects.

Not surprisingly, the coronavirus pandemic had a significant impact on the construction, completion, and opening of cultural infrastructure projects in 2020, leading to a decrease of roughly 30 percent in their volume and value, and creating uncertainty about the future pipeline of development. However in 2021, “the data paints quite a different picture as we record the highest number of completed and announced projects since we first published in 2016,” according to the report. Last year, a total of 211 projects were completed which is more than double the previous year and 174 projects were announced, up by a third. 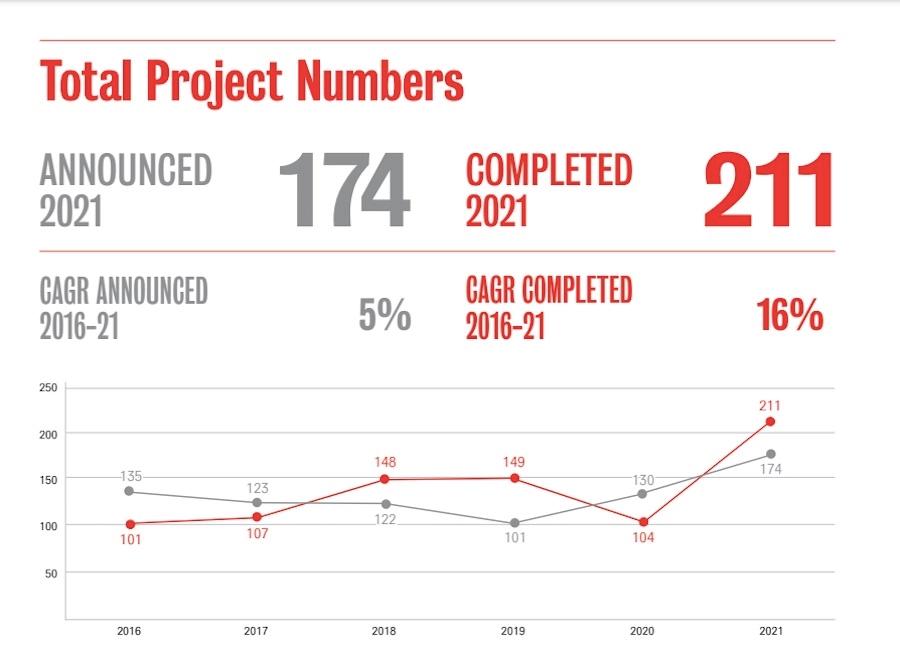 Further, while the volume of infrastructure development appears to have bounced back quicker than the authors of the report expected, more lasting change is likely to be seen in the character of the projects. This is the first year that AEA Consulting included a category for “adaptive reuse projects” in addition to new buildings, renovations, and expansions. They represent a growing segment of total investment, as project leaders seek to minimize waste while maximizing social value and relevance to local communities.

The report highlighted the Depot Boijmans van Beuningen in Rotterdam, calling it “the contender for the world’s most sophisticated publicly accessible art storage facility to date.”  Opened in November 2021 and located in Museumpark in the center of Rotterdam, the $100 million structure stands next to the Museum Boijmans Van Beuningen’s main building which is closed for renovation until 2025.

It was designed by Netherlands-based firm MVRDV, and the building is clad in 1,664 mirrors and topped with 127 trees planted on its roof. Impressively, the Depot contains the museum’s entire collection of 151,000 artworks, housed in 14 storage areas with five different climates over six floors. Visitors can sign up for guided tours, in which small groups are shown around the storage facilities and given an overview of the sprawling collection and the systems in place to preserve and manage it.

Here are seven additional takeaways from the latest report. 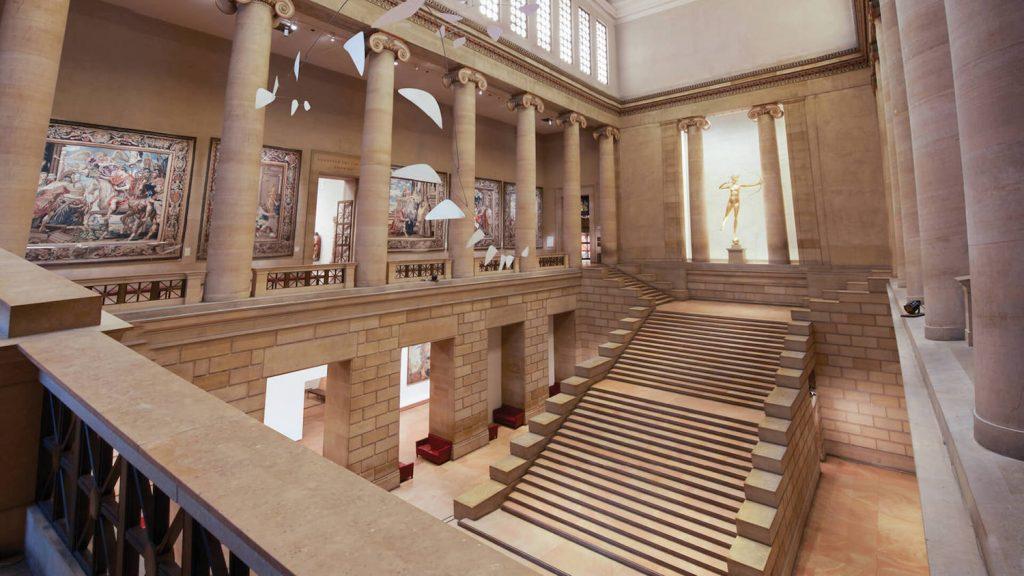 1. 2021 Was A Record Year For Investment and Announced Projects

It was also a record year for announced projects, which were up 34 percent from the previous year to 174. The value of announced capital investment did not keep pace, though, dropping from $8.2 billion in 2020 to $6.5 billion, as median project values dropped 24 percent from $40 million to $30.5 million. The drop can be attributed, at least in part, to several major project announcements recorded in Shenzhen, China, in 2020, which were valued at $2.5 billion together.

2. Growth Was Led By Nonprofits and Private Investment

The growth in 2021 was led by not-for-profit and private initiatives, the volume of which increased by 118 percent and 200 percent respectively across both finished and announced projects. In comparison, investment in public projects — while still accounting for 47 percent  of total infrastructure — fell by 21 percent. The volume of public-private and commercial projects was more or less consistent with the previous year, although the value of completed commercial projects shot up following a lull in 2020, from $28 million to $26  million). This is  “perhaps indicative of increased confidence as we adjust to a new, COVID-tolerant operating reality,” according to the report. 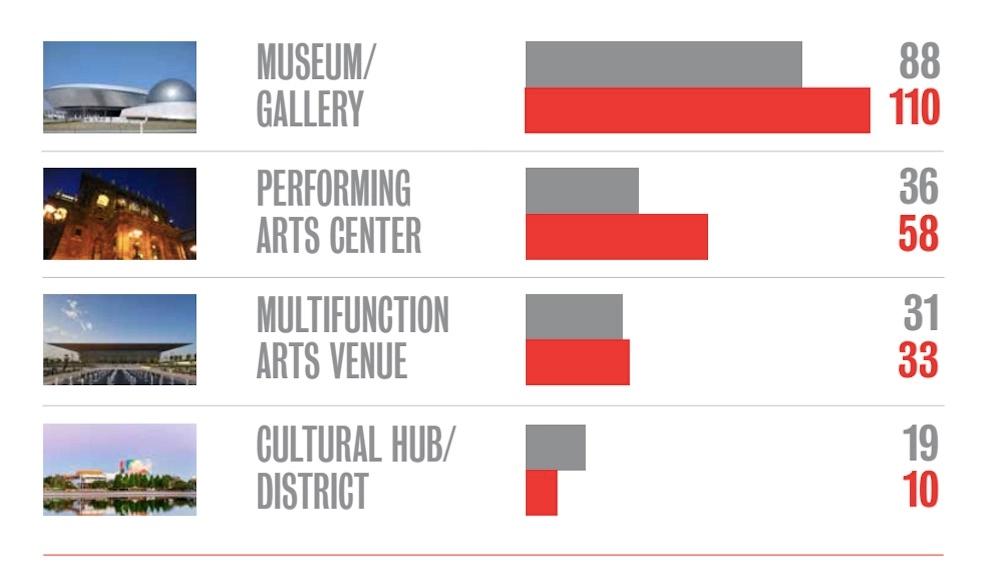 3. North America Is The Region of Most Activity

4. Museums Are The Most Popular Type of Project

5. The Rise of Adaptive Reuse Projects

The number of new-build project announcements fell this year down to 91 from 102, as expansion  and renovation projects both increased, accounting for $972 million and $1.2 billion of investment, respectively. The new category of adaptive reuse projects will now be tracked annually. This year, 22 adaptive reuse projects were completed and 18 were announced with a combined value of $1.6 billion.

7. The Most Expensive Projects

The three highest value projects completed in 2021 were: M+ Museum at the West Kowloon Cultural District in Hong Kong with a reported budget of $760.0 million; MUNCH, Oslo, Norway at $632 million; and the Academy Museum of Motion Pictures, in Los Angeles, California, at $482 million.