Home News A Trove of Ancient Roman Coins Was Uncovered by an Amateur Archaeologist... 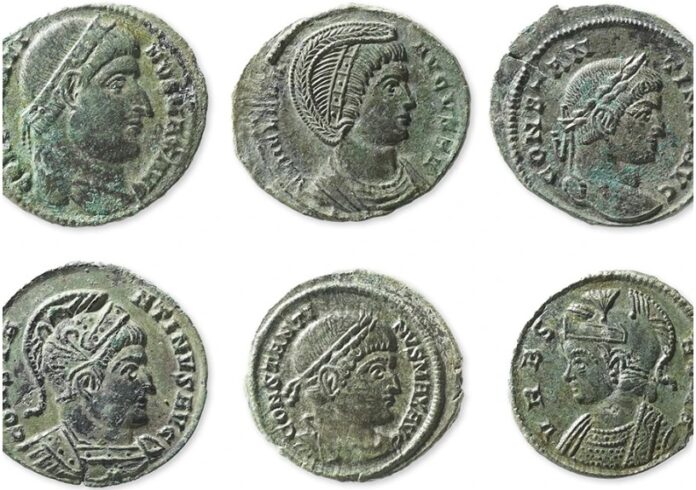 An amateur Swiss archaeologist discovered a trove of 1,290 Roman coins that date back to the reign of Constantine the Great.

Using a metal detector, Daniel Lüdin found the coins inside a clay pot that was buried underground. Last year in September, he found the pot in a forest near Wildenstein Castle in Bubendorf, Switzerland.

Lüdin, who was prospecting the area, first uncovered several Roman coins and pottery shards. After realizing the extent of the trove, he covered the area again and informed local experts at Archäologie Baselland, which runs various initiatives devoted to archaeology in Switzerland’s Basel-Landschaft region.

Archäologie Baselland later extracted the find in its entirety. Using computer tomography at the Swiss Federal Laboratories for Materials Testing and Research, experts scanned the 9-inch-tall pot without disturbing the coins, which made it possible to see leather remnants wedged between them.

What purpose the leather served remains a mystery, though it is known that the coins are primarily composed of copper alloy and traces of silver, and are the equivalent of a small bowl of change. Weighing far less than an ounce, they add up to roughly two months’ salary for a soldier at that time.

“For the time when the pot from Bubendorf was hidden, there are hardly any comparable hoards in the entire Roman Empire,” the statement explained. “These years are characterized more by their political stability and some economic recovery. On the one hand, this makes the find very special, but on the other hand it poses further mysteries. For what reasons were the coins buried and why weren’t they recovered?”

The coins, which date from 332-355 C.E., were minted during a period of peace and prosperity in the Roman Empire under Constantine the Great, who governed from 306-377 C.E. Few coins from that period have ever been discovered.

Archaeologists believe the newfound cache may have been an offering to the gods. However, given its location at a point where three Roman borders would have met, it could also be related to protecting that region.

“A stroke of luck is certainly also the survival of the storage vessel, which contained not only coins but also a piece of leather, organic material that rarely survives,” said Marjanko Pilekić, a numismatist and research assistant at the Coin Cabinet of the Schloss Friedenstein Gotha Foundation in Germany, in an email to Live Science. Further research will be necessary in order to determine “which coins belonged to which side [of each Roman estate], which may help in the interpretation.”