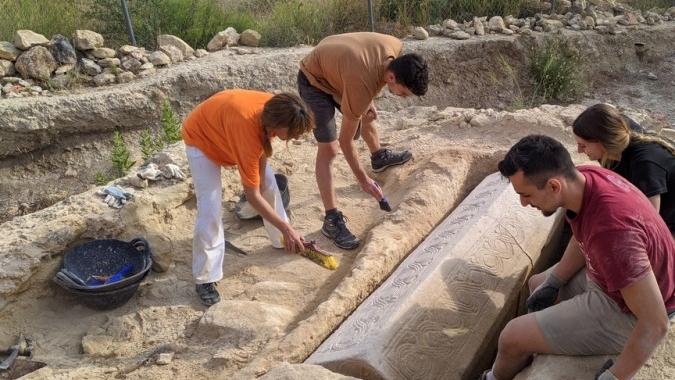 Archaeologists from the University of Murcia found the 6.5-foot-long coffin during a summer dig at Los Villaricos, a large-scale agricultural settlement established by the Romans around the first century C.E. Per Heritage Daily, the sarcophagus was buried at a Roman villa repurposed by the Visigoths following its abandonment around the fifth century C.E. The Germanic conquerors used the structure’s central patio area as a necropolis.

“This year’s campaign was focused on finishing excavating the last three burials in the necropolis and continuing with the excavation work of the complex located north of the town,” lead archaeologist Rafael González Fernández tells Carmen Garcia Cortes of Historia National Geographic, per Google Translate.

Speaking with Charlie Devereux of the London Times, González says, “We weren’t expecting this spectacular discovery.”

According to Murcia Today, the team spotted a Chi Rho symbol carved on the top of the coffin. As Philip Kosloki explains for Aleteia, the monogram—also known as a Christogram—superimposes the first two letters of the Greek word for Christ: chi (X) and rho (P). It represents Jesus, or more specifically, his resurrection.

The Roman emperor Constantine reportedly adopted the Chi-Rho symbol as a military standard after experiencing a vision while praying. Eventually, it became part of an official imperial emblem. The monogram also appears in many early Christian artworks.

Los Villaricos, for its part, was built along a trade route between Carthage and Complutum, a village northeast of Madrid, reports the Times. At its height, the ancient settlement relied heavily on agriculture, producing and storing olive oil, among other goods.

The town went through a series of renovations during the Romans’ occupation of the region. After the Romans abandoned the area, the Visigoths moved in, seizing control and repurposing many Roman structures, including the villa in Los Villaricos, per Murcia Today.

Sometime between the fifth and seventh centuries C.E., Visigoths transformed the villa’s oecus—a large space where the house’s owner once welcomed their esteemed guests—into a Christian basilica, reports National Geographic. They also repurposed the neighboring patio area as a necropolis ad sanctos, or holy necropolis.

Per the statement, archaeologists conducted the excavation in three stages. The first took place in an area that supplied water to the village. The second focused on the so-called pool area, where ancient people produced and stored an unknown product, and the third centered on the town’s tombs.

Previous finds made at Los Villaricos include mosaics, an olive mill and a cistern, notes Murcia Today in a separate article.

“This sarcophagus … shows the archaeological power of [Los Villaricos] and confirms our commitment to the University of Murcia,” local city councilor Diego J. Boluda tells National Geographic, per Google Translate. “Undoubtedly, the piece will occupy a preferential place in the Museum of the City of Mula.”

Helen - October 19, 2021 0
The governor ordered the removal of the state-owned statue in June 2020. A giant statue of Confederate Gen. Robert...