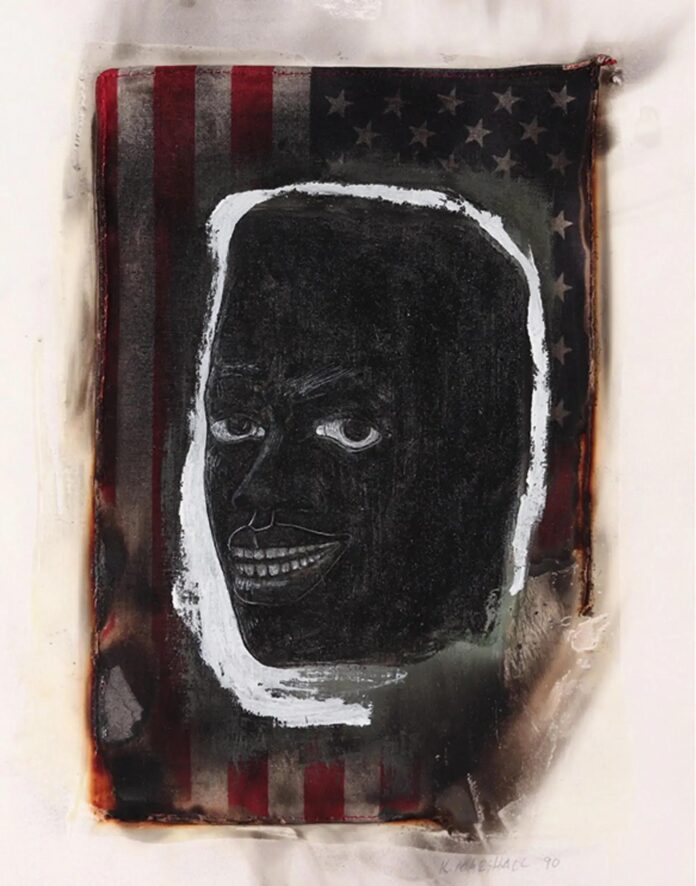 Portrait of a Black Man in a World of Trouble (1990), Kerry James Marshall
Toledo Museum of Art, Ohio

Portrait of a Black Man in a World of Trouble, Kerry James Marshall’s painting from 1990, which depicts the piercing gaze of a Black man overlaid on a charred US flag, is one of 27 works acquired by the Toledo Museum of Art following the sale of three deaccessioned Impressionist paintings from the museum’s permanent collection.

The museum raised $59.6m by selling paintings by Pierre-Auguste Renoir, Paul Cézanne and Henri Matisse at a Sotheby’s New York auction in May.

The museum’s new haul reflects its “commitment to a culture of belonging in a broadened narrative of art history”, Adam Levine, the museum’s director, said in a statement.

A medieval plaque, first discovered in a field in Oldham, Greater Manchester, has been acquired by Manchester Museum. The plaque is thought to date back to the 12th century and will go on public display when the museum reopens in February 2023. It shows St Luke the Evangelist, one of the four traditionally ascribed authors of the canonical gospels, at his writing desk. The head of a bull, the symbol of St Luke, looms above the desk.

This is the first Mosan plaque known to have been discovered in the northwest of England. “Mosan” is a term used to describe enamel, stained-glass and metalwork produced in the valley of the River Meuse between Luxembourg and Belgium, Germany and France.

“We don’t currently know why, how, or when the plaque ended up in a field in Oldham,” says Bryan Sitch, the curator of archaeology at Manchester Museum.

The Museum of Contemporary Art Australia and Tate have announced the joint acquisition of six works by five Australian artists of Indigenous heritage. The works are now on display for the first time at Tate Modern in London as part of the British institution’s expanded rehang of the landmark exhibition A Year in Art: Australia 1992, first displayed in early 2021. The augmented exhibition is on show until May 2023, after which the newly acquired works will enter the permanent collection of both museums under a new sharing scheme.

Frances Morris, the director of Tate Modern, says the acquisition will “allow us to tell new transnational art histories”. The acquisitions were made possible through the International Joint Acquisition Program for contemporary Australian art.