Home News After strike and with a hard-won new contract, Philadelphia Museum of Art... 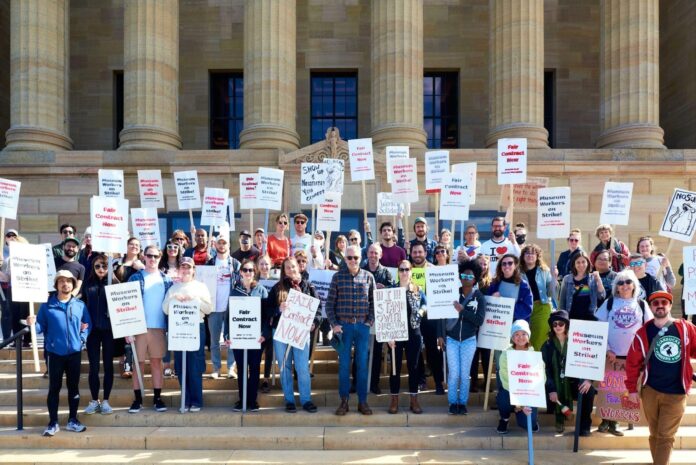 Workers at the Philadelphia Museum of Art (PMA) reached a contract agreement with the museum administration on 14 October, ending a two-year-long negotiation process. The contract was ratified by the union with a 99% majority vote on 16 October. Two days later the workers—who had been on strike for 19 days—went back to work.

“We are all incredibly moved by the support we have received from the community, union siblings, city politicians, state politicians and the general public,” says Adam Rizzo, president of the PMA union, Local 397 AFSCME DC 47. “We never thought we would be out on strike for almost 3 weeks, but we were fighting for things we believed were important, not only for us as workers at the PMA, but also for workers at cultural institutions writ large. We are more united than ever and ready to keep fighting for positive change at the institution we love.”

Key features of the new contract include wage increases of 14% through June 2025, a reduction in the cost of a healthcare plan that many people within the union use, four weeks of paternity leave and an increase of the minimum hourly wage at the museum to $16.75.

The protracted contract negotiations at the PMA were not abnormal, especially for a first contract following the creation of a union—efforts to create a union at the museum began in May 2020, as the Covid-19 pandemic was causing layoffs and furloughs across the museums sector, spurring many workers to start organising. The union at the Museum of Contemporaneity Art in Los Angeles, for instance, took over two years to approve its first contract.

The first day of the PMA worker strike was also the first day on the job for the museum’s new director and chief executive Sasha Suda. Due to this new leadership, and because Suda came from a museum (the National Gallery of Canada) that had a unionised workforce, some observers speculated that the strike would end sooner than later. Instead, it lasted almost three weeks.

“This is a positive outcome demonstrating that no matter how complex the challenge, we can work together,” Suda says. “We’ve laid a firm foundation upon which to build for the future. It’s time to heal, to turn the page and move forward together.” An ice cream social organised by the museum to welcome unionised workers back on 18 October was, by some accounts, a tense event.

The museum, which remained open to the public throughout the strike, came under fire on social media after images of non-union art handlers installing the blockbuster exhibition Matisse in the 1930s began to circulate. “I do know they hired scabs to come in and install the exhibition since all of the installers were out on strike,” Rizzo says. Asked about the museum’s hiring of non-union workers during the strike, a PMA spokesperson said, “The museum does not comment on its special exhibition installation process.” Around the time the installation images surfaced, the museum disabled comments on several of its Twitter and Instagram posts, citing “inappropriate posts” and “profane language”.

“The management team’s decision to hire outside scabs to move, install and care for priceless works of art at a major US museum hit home for me and my fellow arts professionals, and for general audiences as well,” says Nicole Cooke, programme manager for graduate academic partnerships at the museum and a member of the union bargaining team. “When couriers crossed the picket line to supervise the hanging of artworks from their home museums hung by untested scabs and high-level managers who have not done this work regularly in years, if ever, all of us in the union were horrified, frankly.”

While the decision to hire non-union art handlers to keep the Matisse exhibition on schedule remains a sore spot, unionised workers at the PMA are eager to use the momentum from their new contract to build a better museum from the inside out.

“The contract will immediately put many PMA workers in a better position, and it will make this a better place to work for all those who come after us,” Cooke says. “The leaders of the museum world are the people who I marched, picketed, chanted, sang, cried and laughed with on the picket line every day. We brought the change we wanted to see in museums and I hope it inspires others.”