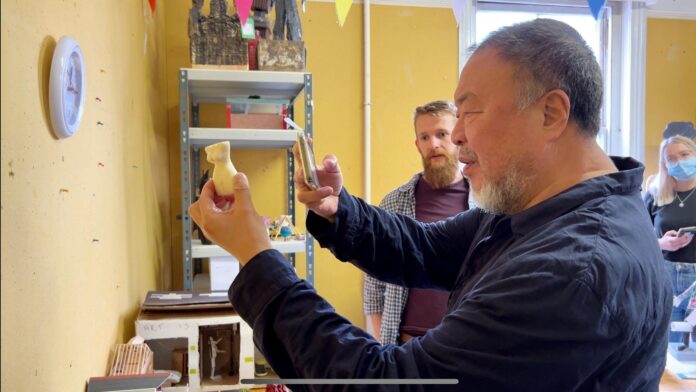 An exhibition of works created by prisoners and people across the UK’s criminal justice system, opening at the Southbank Centre in London this autumn, will be overseen by the Chinese artist and activist Ai Weiwei. The Freedom show, to be held in the exhibition space of the Royal Festival Hall (27 October-18 December), marks the 60th anniversary of the Koestler Awards, a prizes initiative organised by the Koestler Arts charity which exhibits and sells works by detainees.

The Southbank exhibition will include works created by individuals in prisons, secure mental health facilities, immigration removal centres, young offender institutions and people on community sentences across the UK. “The vision for the exhibition is inspired by the artist’s [Ai Weiwei’s] visit to the Koestler Arts building [next to HM Prison Wormwood Scrubs in west London], which currently holds over 6,500 works entered into this year’s awards,” say the organisers in a statement.

Ai Weiwei can draw on his own experiences for his new curating role. In 2011, he was detained by the Chinese government and spent 81 days in a secret prison on charges of tax fraud. At the 2013 Venice Biennale, he showed a series of dioramas (S.A.C.R.E.D.) depicting his prison cell complete with model guards.

Ai says in a statement: “This [Freedom] exhibition focuses on the role that the act of thinking and creating plays in life under constraints. Notable works of art and literature in history were created when the artist was restricted, oppressed, and challenged, rather than being completely free.” The artist also visited HM Prison Wormwood Scrubs and other UK prisons as part of the curatorial process.

Koestler Arts invites people within the criminal justice system to submit works of art across 52 categories for the annual Koestler Awards. Entrants receive feedback and certificates, can be selected for public exhibitions or mentoring, and may sell their works. The first round of Koestler Awards took place in 1962. Past curators of the Southbank exhibition, now in its 15th year, have included the artists Antony Gormley and Sarah Lucas.