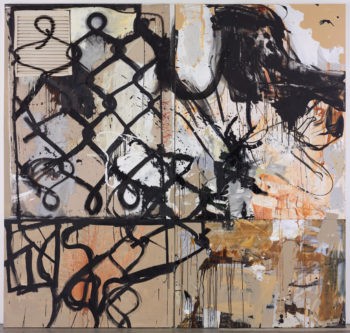 Tsibi Geva is now represented by Albertz Benda. The Chelsea gallery announced its first exhibition with the Israeli artist will be in October 2017. It will feature new work alongside pieces from his presentation at the 2015 Venice Biennale, where he represented Israel.

Geva’s work ranges from loose, abstract paintings to installations and assemblages pieced together with industrial and everyday materials. For his show at the Biennale, for instance, he covered the Israeli pavilion with tires, turning it into a kind of rough-and-tumble Fort.

Geva was born in Kibbutz Ein Shemer, Israel, and now splits his time between Tel Aviv and New York. His work is featured in major collections in both cities, including the Israel Museum and the Museum of Modern Art. Geva is the recipient of numerous awards, including a Lifetime Achievement Award from the Israeli Ministry of Culture.