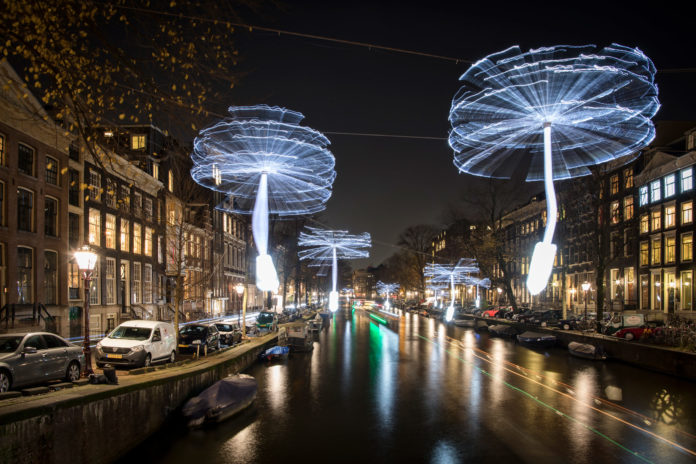 This past month the Amsterdam Light Festival (previously) opened its seven year, inviting visitors to observe 29 light-based works by international artists, designers, and architects along the canals and throughout the historical center of the city. Artworks were inspired by this year’s theme, a quote from media scientist Marshall McLuhan: “The medium is the message.”

Installations such as British artist Gali May Lucas’s piece “Absorbed by Light” address our contemporary obsession with screen-based technologies. Her piece features three figures next to each other on a bench, each head bent to peer at an illuminated phone. Guests can take a seat between the sculptures to get a better look at the piece, or simply rest and check their own device. Another piece, “Waiting” by Frank Foole features a paused loading wheel on the side of the building surrounding the silhouette of a person inside.

Many of the works are presented close to the city’s canals, making an even more spectacular scene when reflected in the water below. Sculptures like Jeroen Henneman’s “Two Lamps” pay tribute to this effect as the title references the lamp installed on the riverfront, and the one that is projected into the glassy surface underneath. The Amsterdam Light Festival continues to light up the city through January 20, 2019. You can see more documentation of this year’s festival on their website. (via Design Boom) Alicia Eggert, “All the Light You See” Gali May Lucas, “Absorbed by Light”