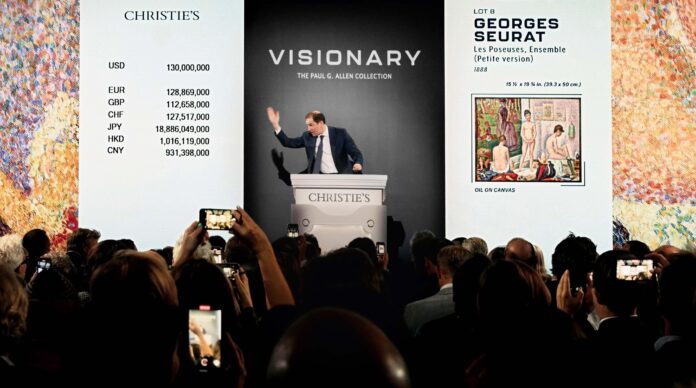 “It’s an absolute record, not only for Christie’s but for the art market.” So said Guillaume Cerutti, the auction house’s chief executive, of the $8.4bn racked up by the firm in 2022, at a press conference today. “We are in a challenging macro environment, but these figures show the resilience of the art market.”

Auction sales accounted for $7.2bn of the total and private sales $1.2bn. More than 45,000 lots were sold by Christie’s across the year, with a strong average sell-through rate of 85%.

Unlike Sotheby’s, which combined its real estate and classic car auctions with its fine art and luxury sales for the first time this year, Cerutti noted how Christie’s are “purists”. He added: “Here, we focus on art and luxury, which are our primary businesses.”

The buzzword for 2022 was collections. Cerutti described the Paul G. Allen sale, which fetched a record-breaking $1.6bn (though all effectively pre-sold via guarantees), as “a defining moment for the art market, for art and for philanthropy”—though Christie’s has still not announced which charities will benefit the sale.

That and other single-owner collections, such as the first sale dedicated to the artist couple Claude and Francois-Xavier Lalanne in the US, contributed to a sharp rise (73%) in sales in the Americas, which racked up $4.55bn in total. Christie’s France raised around $500m, its highest total ever, with collections including that of fashion designer Hubert Givenchy again raising half the revenue. Spending in Asia, meanwhile, was down 20% to $833m—unsurprising in a year still marred by Covid restrictions, particularly in Hong Kong and China.

Nonetheless, Asian collectors are still seen as key to growth, particularly when it comes to millennial buyers, 40% of whom came from Asia in 2022. Overall, millennials accounted for 21% of global buyers and generated 10% ($172m) of the total global purchase of contemporary art, with hot young artists including Matthew Wong, Adrian Ghenie and Anna Weyant among the favourites. A further $110m was spent on watches, jewels, handbags, trainers and wine. Proving the power of digital, an extraordinary 89% of buyers purchased via online channels.

As clients look for more certainty in a less frothy market, guarantees were up 86% on 2021 (688 in 2022 versus 369 last year). Though, as Cerutti noted, “guarantees are very often in play for higher value lots”, so they were “not a defining factor in the high sell through rate”. Indeed, guarantees accounted for just 1.6% of all lots sold by Christie’s this year; in 2021 this was 0.9%.

Looking ahead to 2023, Ben Gore, Christie’s chief operating officer, described what will happen next as “the trillion dollar question”. He noted how the firm has been grappling with inflation and the war in Ukraine among other headwinds. But, he said: “The power of what we do—with collections, with curation, with a strong team—will take us through.”