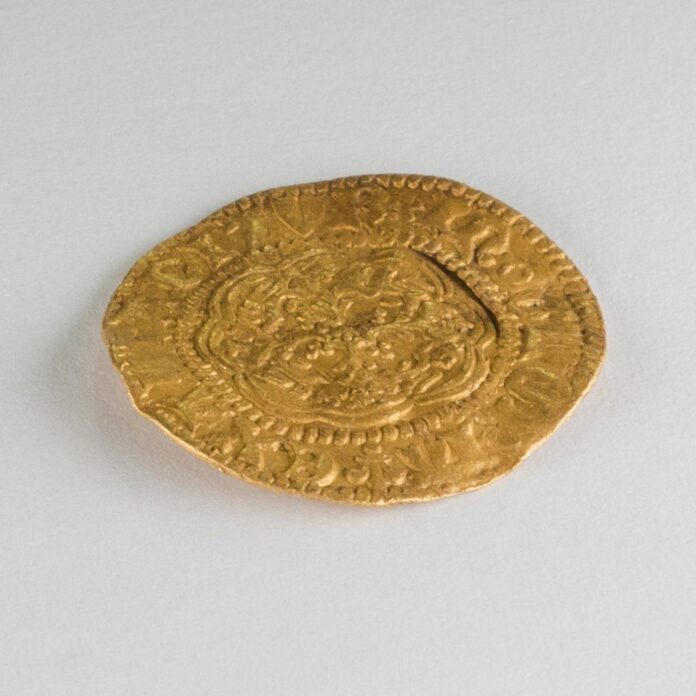 Hynes spotted the gold doubloon while surveying an undisclosed archeological site along Newfoundland’s southern coast, The Canadian Press wrote. The exact location is being kept under wraps to ward off vigilante treasure hunters.

Following the province’s Historic Resources Act of 1985, Hynes reported his find to the local government. Paul Berry, a former curator at the Bank of Canada’s Currency Museum, assessed the object and determined that it is a Henry VI quarter noble coin, minted in London between 1422 and 1427. It had a face value of 1 shilling 8 pence—a hefty amount at the time.

“It’s not the sort of thing you’d expect migratory fishers to be walking around with,” Canadian archeologist Jim Brake, who was also involved in the case, told The Press. Experts guess the coin was not in circulation by the time it got to Canada.

Both sides of the coin, shown alongside contemporary Canadian currency for scale.

What is more, this quarter noble could predate explorer John Cabot’s 1497 arrival in Newfoundland by 75 years—resurfacing questions about the presence of Europeans in Canada. Norse travelers, for example, are believed to have visited the American continent’s shores much earlier than English sailors arrived. Newfoundland, however, became the British empire’s first land holdings in North American in 1583.

This newest find was made almost exactly one year after Newfoundland and Labrador publicized the discovery of their previous oldest English currency, a Henry VII “half groat” minted in Canterbury around the 1490s. That piece was found at Cupids Cove Plantation Provincial Historic Site.

“Some artifacts are important for what they tell us about a site, while others are important because they spark the imagination,” said William Gilbert, who discovered Cupid’s Cove in 1995, of that half groat. “One can’t help but wonder at the journey it made.”

Questions prevail with the other coin too. Just because it is older than Cabot’s expedition doesn’t prove there were foreigners in Newfoundland or Labrador outside the historical ledger. A later settler could have brought the coin to these shores as part of their collection, for example.

Brake and his researchers are devising a plan to further explore the site where Hynes found this coin. Brake told the CBC that Hynes’s discovery will probably go on public view at the Rooms museum in the provincial capital of St. John’s.

“I commend Mr. Hynes for recognizing the importance of protecting Newfoundland and Labrador’s heritage resources by reporting his discovery,” Steve Crocker, Minister of Tourism, Culture, Arts and Recreation, said in a statement, encouraging others “to follow his example.”