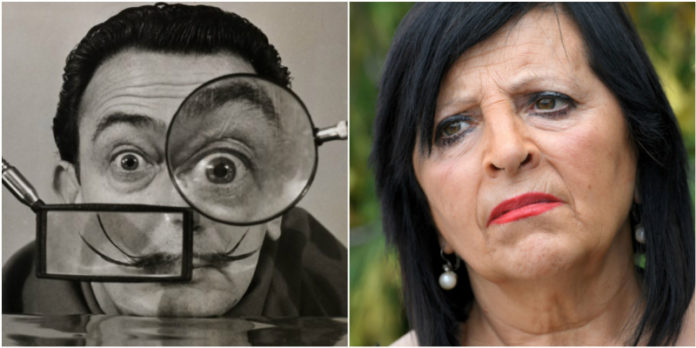 According to the representatives of the Gala-Salvador Dalí Foundation regarding DNA tests conducted in the laboratories of Barcelona and Madrid, Pilar Abel is not the daughter of the famous Spanish surrealist artist Salvador Dali.
Recall 61-year-old clairvoyant Pilar Abel claimed that her mother had an affair with Dali when she worked as a nanny in a family that rested in Port Ligat. This is a tiny fishing village on the coast near Cadaques, where the painter has lived and worked with his muse Gala for years. Pilar Abel in 2015 filed the first lawsuit on the establishment of paternity. In June 2017, the court in Madrid decided to exhume to continue the hearings on the case. “The study of the DNA of the artist’s body is necessary because of the absence of other biological or personal remains, with the help of which it is possible to conduct a comparative analysis,” it was said in conclusion.

In the evening of July 20, 2017, at the Salvador Dalí Theater Museum in the Spanish town of Figueres, work was carried out to extract the remains of the artist. Experts took samples of teeth, hair, nails, and extracted two long bones.

The administration of the museum tried to delay the exhumation, but the judgment was carried out on the appointed day. In order to extract the remains of Salvador Dali, it was required to raise the plate above the crypt, which weighs 1.5 tons – it was not disturbed for 27 years. The procedure was attended by forensic experts, court representatives, as well as a representative of the Gala-Salvador Dali Foundation. The lady saw the remains of the artist and told that the famous mustache of the artist was perfectly preserved, and, as in life, “show 10.10” (imagine the hands of the clock).
The results of genetic research, which were handed over to the court by employees of two laboratories – are unambiguous: the artist was not the father of the plaintiff. Final session in the Pilar Abel case will be held on September 18.