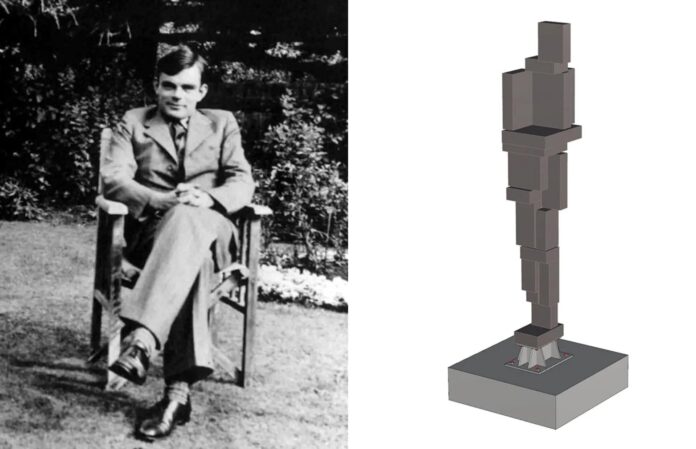 Antony Gormley’s proposal for a 12ft steel sculpture commemorating the Second World War code-breaker Alan Turing has been approved by Cambridge City council following earlier objections from the heritage body Historic England. The sculpture of Turing—a brilliant mathematician who deciphered military codes used by Germany in the war—will be erected in the grounds of King’s College where Turing read mathematics in the 1930s.

A wartime hero, Turing successfully decoded German messages with the Bombe, his machine designed to break Enigma-enciphered messages. But, after being disgraced by a conviction for “gross indecency” for homosexuality in 1952 and an enforced chemical castration, Turing is thought to have committed suicide in 1954.

“At some distance from the Chapel, [Gormley’s piece] will nestle at a confluence of paths by the college library on the route used by University members and Cambridge residents to cross to The Backs [a scenic stretch of land between the banks of the River Cam and the rear grounds of several Cambridge colleges],” says an online statement from King’s College. The plans for the sculpture were approved by the city council’s planning committee on 3 August; visitors will have to pay to enter the college and see the work.

But in 2020, officials at Historic England said that the abstract metal figure made of 19 steel slabs “would harm the particular character, created by the interplay of buildings and landscape, which makes the college so remarkable a place”. Speaking to The Art Newspaper, a spokesperson for Historic England says: “Historic England provided detailed advice to Cambridge City Council, setting out the impact of the proposal on this highly sensitive site and noting the public benefits of the proposal. We encouraged the Council to weigh these carefully in accordance with planning policy. We note that our advice has been taken into consideration during the Council’s assessment and decision.”

Numerous letters of support endorsed Gormley’s Turing sculpture despite the controversy. Alex Farquharson, the director of Tate Britain, wrote in a redacted letter dated 7 October 2019 that he considers “this work to be a highly fitting tribute from one of our leading artists to one of our greatest mathematicians”.

Last week, plans to install a sculpture by Gormley at Imperial College in London caused concern among the university’s students who claim the work is “phallic”. ALERT, a six-metre-high stack of cantilvered steel blocks meant to resemble a squatting human figure, is scheduled to be placed in the newly built Dangoor Plaza as part of a major redevelopment of the university’s South Kensington campus.

In a ‘Once-in-a-Lifetime’ Discovery, Swedish Archaeologists Unearth a Cache of Viking Silver