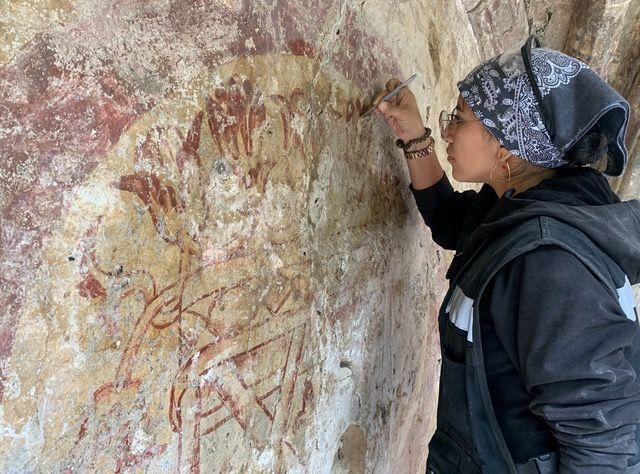 A pre-Columbian wall painting discovered in a convent in Tepotzlán could shed light on the relationship between Mexico’s Indigenous inhabitants and the Catholic church, which sought to control cultural expression after the Spanish conquest in the 16th century.

The Instituto Nacional de Antropología e Historia (National Institute for Archeology and History) (INAH) announced earlier this month that archaeologists found the wall painting hidden under several layers of whitewash in a corner chapel at the Ex Convento de la Natividad (the former Convent of the Nativity).

The mural consists of a red circle measuring approximately one metre. Within the circle there are renderings of several pre-Columbian images, including an axe, a chimalli or shield, a sprig of flowers and a feathered headdress or “penacho”, which was traditionally worn by a member of the Aztec aristocracy.

Due to the fragile nature of the feathers and other organic materials, very few penachos have been discovered, and there are very few wall-based images of them. The best known example of the actual headdress, the Moctezuma headdress, is currently in the collection of the Welt Museum, an ethnographic museum in Vienna, Austria, which in 2021 refused a request to loan the item to an exhibition in Mexico.

The find at the convent surprised restorers who were originally commissioned to repair the main structure of the church, which was declared a UNESCO World Heritage Site in 1994. The building was damaged during the series of earthquakes and aftershocks that struck the central pacific coast of Mexico in September 2019.

The corner chapels are known as “capillas posas” (posing chapels) and—while their significance has not yet been definitively established—experts believe that they were built to shelter a priest and his accouterments during services held to expedite the mass conversion to Christianity of Indigenous people. Only three corner chapels remain standing at the site and none are in particularly good condition, and only one has been found to contain the circle with the  pre-Columbian symbols.

Local communities still enact a pilgrimage every year to a nearby mountain that contains the archaeological site El Tepozteco, which has a temple to Tepoztēcatl, the Azetc god of the alcoholic beverage pulque that was worshiped by the Nahuatl-speaking Aztec who inhabited the area, and who would have likely provided much of the workforce and labour on the construction of the convent.

Restorers were aware of existing markings of a similar size on a nearby wall dating from a similar era, between 1555-1580, when the convent was first erected for an order of Dominicans, but noted that all of those were definitively Christian markings associated with the Virgin Mary. INAH said in a statement that it is possible that the new find relates to Tepoztécatl.

The project coordinator, Frida Mateos Gonzalez, told The Art Newspaper that restorers caught a glimpse of the drawing while removing a layer of limestone whitewash from the walls of one of four small structures built at each corner of the open air courtyard at the convent.

“It was an incredible surprise, because while we always have an eye out for anything unusual, it was not something we anticipated finding,” she says. “It was a very delicate operation as we had to remove each layer very carefully in case we removed a layer of paint.”

She adds, “As soon as we can, we will be examining the other chapels and sections of the complex but this is a very slow process and I can’t say how long it will take.”

The chapel is currently closed to the public. Mateos Gonzalez also revealed exclusively that traces of another colour—yellow—has also just been found on a wall at the convent and that research into the provenance of the pigment would begin very soon.

Farewell to contemporary art in Russia: the cancellation of the Moscow Biennale marks the end of an era