Home News Art Basel is not just an art fair, it is a technology... 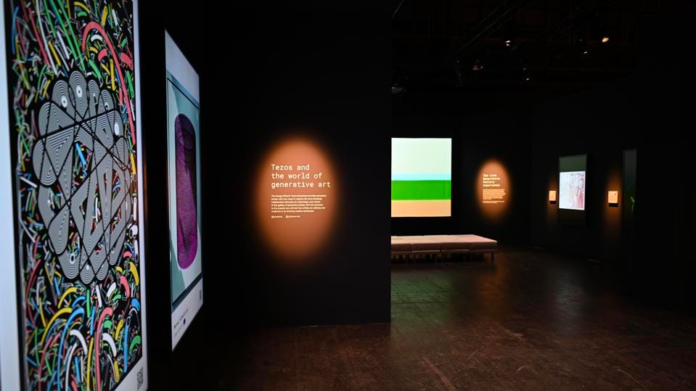 For 375 of us, the week of the Art Basel fair started in Zurich at NFT Art Day, an almost heroic attempt to progress beyond novelty and sensationalism in the art world’s general understanding of digital art. At Art Basel, NFTs were present but not fervent—possibly matured or subdued. Crypto value was crashing and we were in Switzerland, not Miami, after all.

NFT platforms—where non-fungible tokens are bought, sold and resold—such as fxhash, Tezos and Pace Verso had events and loudly branded areas in Basel. Yet, in actuality, the most successful technological changes in the art world are perpetually happening seamlessly through its existing power players such as Art Basel itself.

While an art fair on the surface, the MCH Group-owned Art Basel is a multi-tiered, technical system that controls access not just to the first look at works for sale but also to art-world data. While the satellite fair Liste partners with Artsy for its online marketplace, Art Basel integrates the fair and technology platform in-house.

What makes a platform?

Technology platforms allow users to run applications smoothly without fussing about the technology that supports them. Following the success of Facebook and YouTube in the mid-2010s, many companies in Silicon Valley were trying to convince investors that they were platforms. When GoPro went public in 2014, it did so at the valuation of a company that didn’t just make a camera you strapped to your chest while skiing but as a platform.

This is because platforms have users and users create data, and data can be sold and used to sell even more things to users. More importantly, much of the value of a platform is created by its users while the infrastructure, network effects and switching costs are created by the platform.

At first Amazon, for example, made it easy for small businesses to sell their products to their huge user base online. Having had decades of data to analyse, Amazon now sells many products direct to consumers, cutting out the businesses that originally made its platform popular. After their user base was massive, both Facebook and Twitter revoked application programming interfaces that allowed third-party companies to create on top of them. Platforms disintermediate. As more and more power in the art world is mediated by platforms such as Artsy, Artnet and SuperRare, it’s worth noting that there is no reason to believe the art world will use technology any differently.

Already, these platforms compete with each other. Winning art-world platforms not only harvest and make productive use of data but manage our networks, client relations and payment flow. Both Artsy and Artland take a percentage of sales as well as charge subscription fees to galleries, while NFT platforms take anywhere from 5% to 30% of sales.

Platforms in the art world can be divided into those whose business models depend on galleries, like Art Basel, and those that do not, like SuperRare. Unlike auction houses, art-fair platforms like Art Basel have, for now, an incentive to work through galleries instead of seeking to connect collectors directly to artists. Just as an artist cannot take out an ad in Artforum, a dealer without a physical location cannot apply for most art fairs, the New Art Dealers Alliance being an important exception.

Are platforms good for art?

The art world benefits from the way platforms nurture professionalism and create sales pressure on galleries. Platforms tend to have larger, more diverse teams than most galleries and institutions. From an interview with Artsy, it seems to be a specifically good example of a diverse company in defiance of both tech and art-world norms.

As companies, platforms pay their employees better, have actual human resource departments, and operate on clearer commercial principles than most galleries. Ultimately acting as a platform, whether in art or the tech industry, is a play to accumulate and utilise power. As power accumulates we should always be asking: who is controlling access and what obligations do they have to the consumer, let alone to the art?