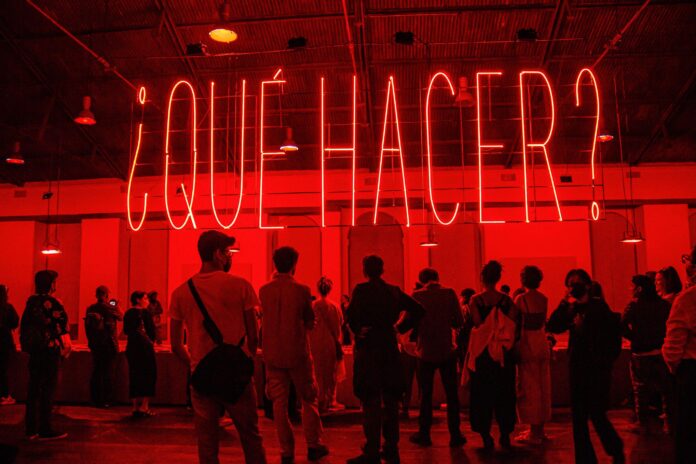 The second edition of the Hacer Noche art festival in Oaxaca opened on 3 September across 20 cultural institutions and unconventional sites, including a radish field and the Monte Albán archaeological site. Titled Promised Land in homage to Joe Smooth’s eponymous techno hit, the sophomore show was organised by the Guinean-Spanish curator Elvira Dyangani Ose, the current director of the Barcelona Museum of Contemporary Art (MACBA).

“There has been no time that I came here and did not come across a demonstration for whatever reason,” the curator told The Art Newspaper. “People are so aware of their engagement with what it means to have active political representation, and this collective awareness was a core in my imagination.”

On the heels of a pandemic as well as socioeconomic and environmental turmoil, the expansive festival invites visitors to experience firsthand the possibilities born out of shared engagements. Like many recent biennials that opt for loose thematic ties and freer explorations across their sites—such as the ongoing Manifesta 14 in Kosovo or the recently opened Istanbul Biennial—Hacer Noche aims to provide a catalyst for the public to gather around concerts, interventions, performances, feasts and meditations throughout the southern Mexican city. From local group Colectivo Amasijo’s hike in search of pre-colonial histories in the mountains to Berlin-based collective Slavs and Tatars’s pickle bar-cum-think tank, the programming echoes the immediacy of everyday interactions towards ample potentials.

“You can call this a biennial if you allow a biennial to be something else,” Dyangani Ose says about why they call Hacer Noche an artist-led festival. “There is a certain rhythm to experience what artists are offering here beyond an exhibition.”

The Oaxaca-based artist Jaime Ruíz Martinez’s eight-episode talk show, La Maquiladora, is an example of the festival’s assumption of alternative mediums. The 52-minute chapters explore different waves of contemporary art in Oaxaca through the lens of the city’s political landscape. “We decided the topics for how they have radically affected the cultural community and the disciplines of the art”, Ruíz Martinez said, “such as the death of painter Francisco Toledo permitting an accelerated process of gentrification and overexploitation of the Indigenous subjectivity”. The artist notes that using mass media is not a revolutionary concept, but, “this time it is not about appropriation; it is about conciliation and how we can produce multiple coexistences crossing the borders of artistic practice, the media and institutional labour”.

Another local artist, Berenice Olmedo, turns to the more conventional medium of sculpture to shed light on its overlooked representations, in this case the differently-abled body. Olmedo’s sculptures of leg prosthetics invite the public to consider, according to the artist, “disability is not only physical but also political and social”. Resistant for movement and refusal for marginalisation are the pillars Olmedo aims to build through the immediate tactility of sculpture. One of her goals is to switch the assumption of absence of a limb with “a presence”. The idea of a festival, she believes “proposes encounters between bodies and corporeality that collectively reimagine politics of visibility and multiple futures”.

Hacer Noche translates to “crossing the night”, a moment of transformation and transition from darkness towards light and from one place yet to another. According to Dyangani Ose, the title encapsulates the show’s sentiment of engagement, veiled by the “ritualistic” potentials of the nocturnal moment. “You are on a journey, and you have a stopover and experience something new,” she says.

The inaugural edition of the festival in 2018 had focused on the spiritual and creative links between 42 artists form southern Africa and Mexico and received 100,000 visitors.

Art Industry News: A Sweeping Documentary Series About the NFT Phenomenon Is Coming to Amazon Prime + Other Stories

Here Are the 9 Biggest Art-World Controversies of 2022, From Climate Activists Attacking Masterworks to A.I. Replacing Artists