Home News Art School Is Too Airless, Inaccessible, and Out of Touch. Here’s How... Artists have inevitably been tempted to imagine alternatives to formal art school training ever since it first arose during the Renaissance in the form of academies, with their refined, traditional, and exclusionary associations.

“An oasis of decency for artists outside the system,” promised a prospectus for the East Anglian School of Painting and Drawing, set up in Suffolk, England in 1937 by artists Cedric Morris and Arthur Lett-Haines. The legendary school would count Maggi Hambling and Lucian Freud among its students.

In recent years, the YBA artist Marcus Harvey founded the artist-led Turps Art School for painting in London. Described in the Guardian as “renegade,” its stated aim is “to challenge the one-size-fits-all, inch-deep, mile-wide approach to art education.” 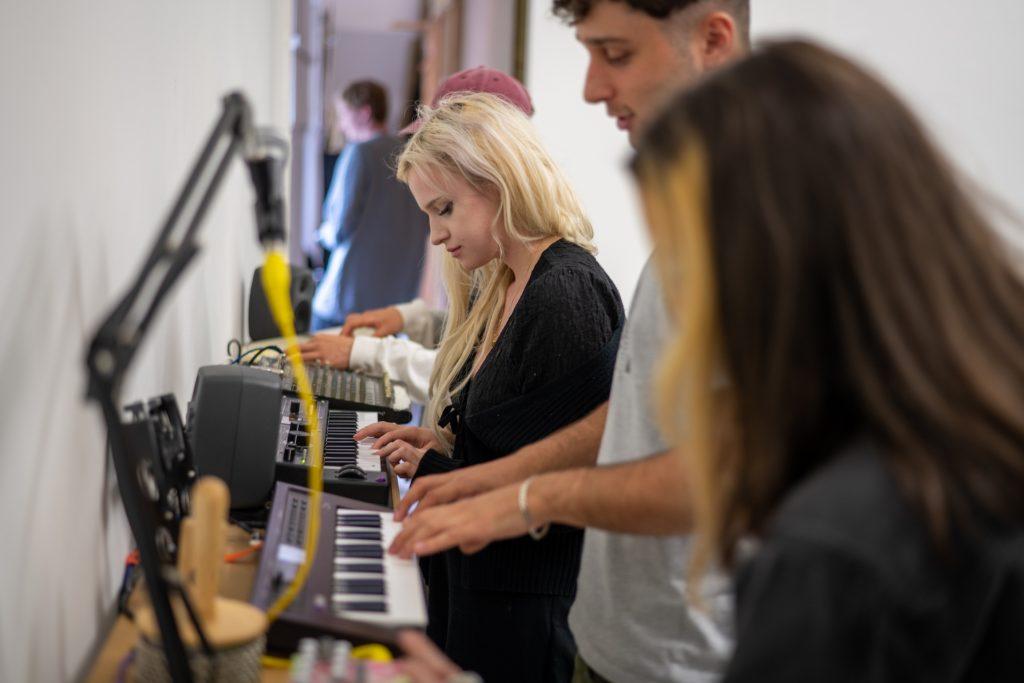 Students at the Music and Video Lab. Photo: Perran Tremewan.

In a still more ambitious bid to improve access to the arts, artist Mark Leckey piloted his Music and Video Lab this summer. The free month-long art course is intended to attract people aged from 18 to 25.

This first run took place in the old mining town of Redruth in Cornwall initiated by Teresa Gleadowe, curator of the arts organization CAST, and Auction House, a project space run by artist Liam Jolly. The project cost £15,000 ($18,000), with some support from Arts Council England.

The final works will be screened at CAST from August 5 through September 3. We caught up with Leckey to find out more about his reasons for starting the course and the complicated process of reaching new audiences.

What were your own experiences of art education?

I left school at 16 and was unemployed for about four years. This was back in the early 1980s, when you had things like the Youth Training Scheme and the Youth Opportunities Program, so I was doing that but was getting into trouble and had no direction. Because I could draw, someone suggested that I go to art school. I always liked music and I knew that a lot of musicians and bands had gone to art school so both an ability to draw and a romantic idea of being in a rock band made me look into it.

By then I was a mature student so I got a full grant and my housing benefit paid. All of this made me financially better off going to college than staying at home. Those opportunities have now completely gone, along with other public services I enjoyed, like youth clubs. One of the reasons for the course is this lack of opportunities, particularly for people from a background where college is unaffordable or not within their cultural visibility. 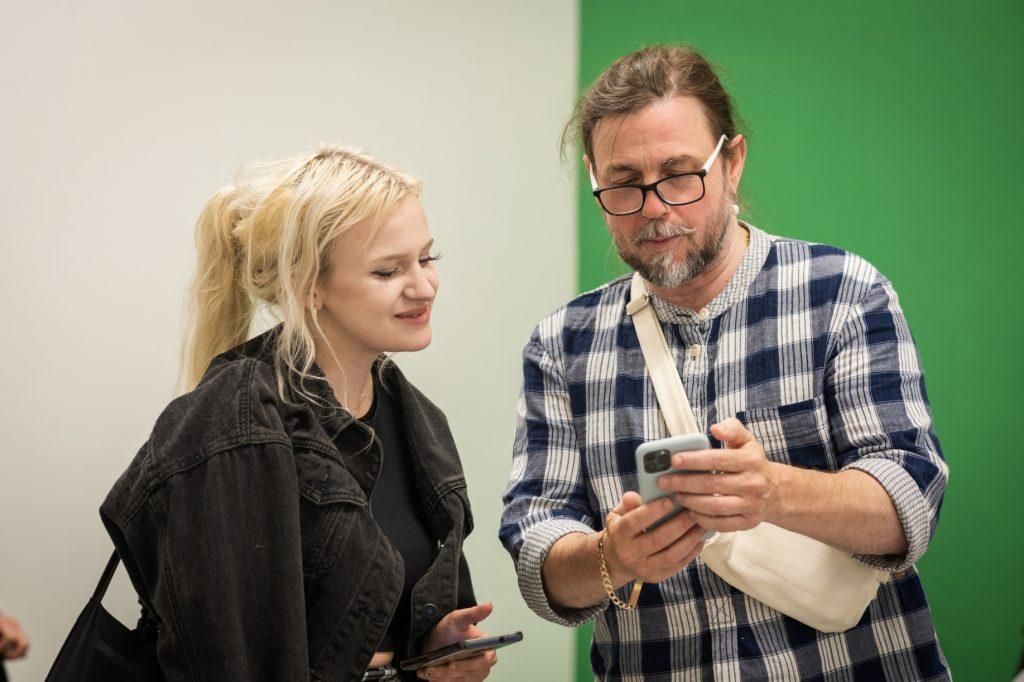 Why did you decide to start the course and name it Music and Video Lab?

It’s an idea I’ve been carrying around with me for a long time. The idea is to try and reach people who wouldn’t normally have that kind of access. Redruth is a deprived area and we wanted to find young people where it’s not already an inevitable development of their education to go to university.

We avoided talking about it as an arts course because if you do that then all the applicants are already thinking of going to art school. To try and expand that a bit more we decided to just find people who would be interested in a creative editing course. If you can promote it more as a way to further technical abilities or network then it doesn’t seem as daunting in the way I think art can be if you haven’t been enculturated into it.

What was challenging about finding applicants for the course?

I’d made inroads on this idea before and the problem is always outreach and finding the right channels to those people. We applied to local community colleges and social groups that are set up around Cornwall. I don’t know Cornwall, so I couldn’t navigate it easily. If we do it again, it’s likely going to be in Blackpool or London.

My idea was to promote it through music and enlist musicians that were fairly well known. We made a bill poster with their names on to catch people’s eye. [Musician guests included Gazelle Twin, Patten, and Lee Gamble.] The problem was that we were trying to reach people in a physical domain, whereas their information is all within the digital and I can’t access that.

How did you develop a curriculum and how was the course structured?

I wouldn’t call it a curriculum and it wasn’t very structured. There was a lot more playing around than that and there were aspects that were more like a youth club. We had no idea what stage they’d be at so we had to do it a bit on the fly and get to know them. I started off by showing them things that I’d gathered together from YouTube and TikTok and then mixed that with videos by artists and film clips.

They’d then go on their laptops and me or Liam would speak to them individually. We’d talk about whether anything that they’d seen had interested them or fired off an idea and then I was showing them devices—sonic and visual tricks—that they can use. The curriculum was just trying to provide them with both the tools and the thought to edit creatively. 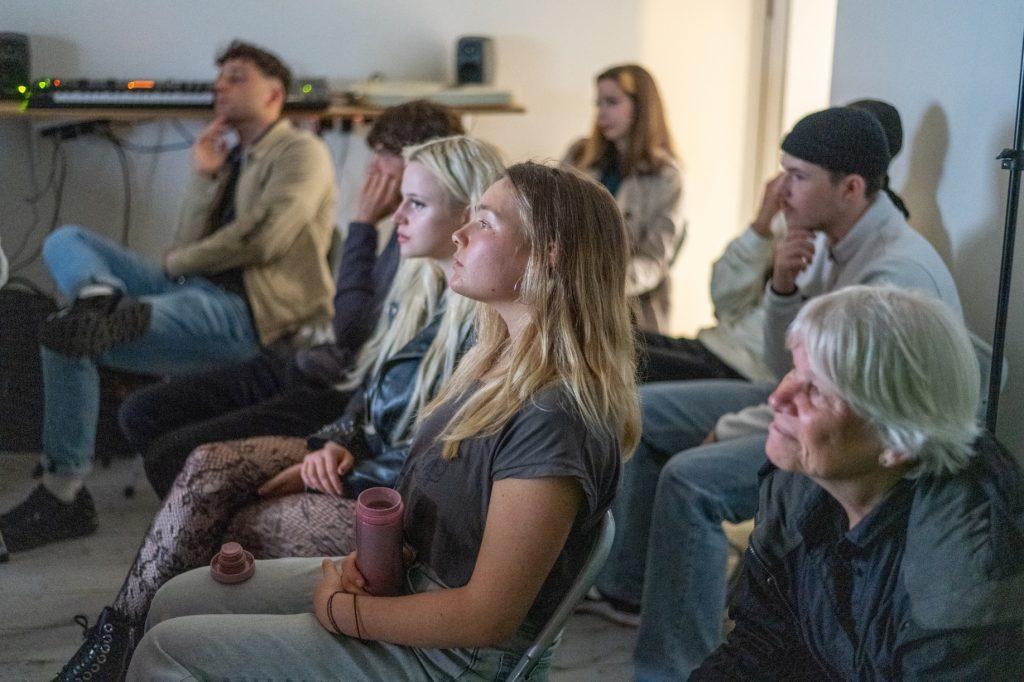 Students at the Music and Video Lab. Photo: Perran Tremewan.

Do you think artists are setting up their own schools to try and improve the art schooling system?

I think university courses are under a lot of duress, but I don’t want to see them replaced. I went to art school 30 years ago, and in terms of class I would say there was more of a mix, but art schools were also almost entirely white so there have been changes for the better.

My course would be more akin to a foundation course, maybe, but not necessarily with the objective to then go into further education. It could just be to continue to be a musician and make your own music videos or to do something on YouTube. My interests lie in both art and in visual culture as it is within social media and I find them equally creative and productive.

Why did you decide to take out the critical aspects that would typically be a big part of art school?

I have an ambivalence to that because you can’t make work without some critical knowledge but at the same time, that critique can be inhibiting. I had read novels but I hadn’t really read in the way that was being asked of me when I got to art school. I found that very difficult. That ability to read critical text without being intimidated or feeling that it wasn’t a language for me was only something I came to much, much later. But that critical pathway can also open things up and be transformative.

[At Music and Video Lab] you can begin to make something without fretting about whether it’s art or whether it sits in the discourse. You can arrive at the questions later, moving towards a criticality but not beginning there.

What kind of works were being made in the course?

There was a variety. One singer made a music video for her songs, another kid made a techno track, and another collated all the videos he had on his phone to a grime track he had written. The success of it for me was that everyone produced something and no one got stuck. Looking back to my days at art school and teaching at art schools, that’s the biggest obstacle. The good thing about this course is they all flowed and that was really rewarding to see.