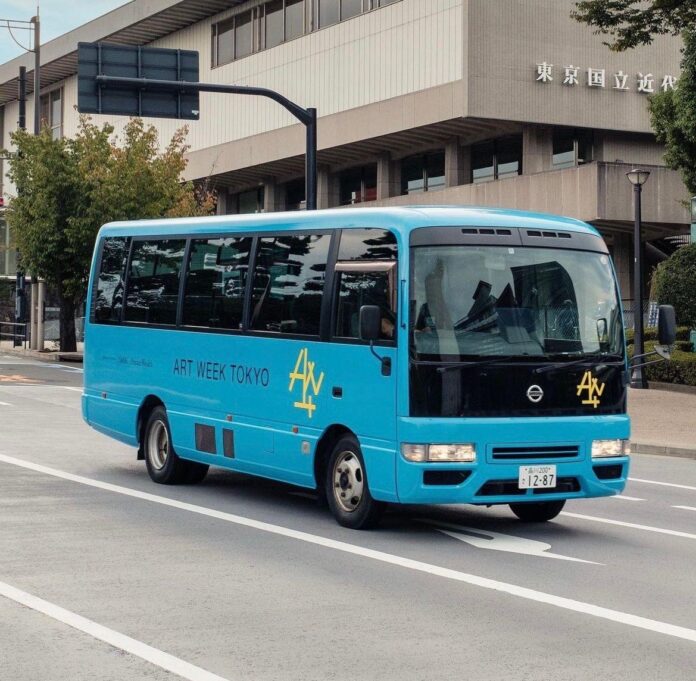 After two years of limited exchange with the rest of the art world, around 350 VIPs from Asia, the US and Europe descended on Japan’s capital this week for the official launch of Art Week Tokyo—a perfectly orchestrated event where visitors are shuttled by bus between 51 participating galleries, as well as dozens of museums.

“The idea is to connect the dots between the different cultural stakeholders in Tokyo,” says Atsuko Ninagawa, the owner of Take Ninagawa gallery who co-founded the event together with the local collector and investor Kazunari Shirai. She thinks Tokyo has all the right ingredients to become an international art hub once again (Japan’s market last boomed in the late 1980s, but severely declined during the 1991 recession). These include a rich art history, a large pool of contemporary artists and a well-established network of private and public museums. “We have fantastic content, we just don’t know how to showcase it to a global audience,” Ninagawa adds.

Galleries in the city are typically modest in size and dotted around various districts. Rippongi and Ginza boast the biggest clusters, though the scene is more rhizomatic than most. Crucial to the week’s success are the free shuttle buses, which depart from venues every 15 minutes. It is hard to imagine another city operating this scheme with such efficiency.

Financial support for the event comes from the Tokyo Metropolitan Government and the Agency for Cultural Affairs, while Shirai has provided other crucial resources including staff.

So, could Art Basel could become another stakeholder in the city? The Swiss fair already helps organise Art Week Tokyo (together with the Japan Contemporary Art Platform), providing expertise and all-important access to its VIP address book. With Covid-restrictions and political pressures from Beijing putting a stranglehold on the Hong Kong art market, Art Basel is likely to be looking for another Asian perch. The Swiss fair’s parent company MCH Group bought a 15% stake in ART SG, which is due to open in Singapore after multiple delays in January. That fair is owned by Tim Etchells, Sandy Angus and Magnus Renfrew. The trio are also launching Tokyo Gendai in the Japanese capital next July, though MCH has not invested in this new fair.

However, many dealers say they prefer the Art Week Tokyo model over exhibiting at international art fairs, which can be lucrative but also expensive to participate in, particularly for Japanese galleries dealing in a devalued yen.

Others say there is no need for an international art fair in Tokyo, particularly given the relative proximity of Frieze Seoul, Art Basel in Hong Kong, Taipei Dangdai and ART SG. “Some Japanese collectors would be interested in an international art fair in Tokyo, but as a gallery we need something like Art Week Tokyo—other forms of presentation might work better here,” says Tomoko Ashikawa, the director of WAITING ROOM gallery.

Atsuko Koyanagi, of the eponymous gallery, participated in fairs for 15 years before quitting in 2015. “You spend so much money sending art and staff abroad—but you can’t raise the prices to balance it out,” she says. The dealer has a solo exhibition of Hiroshi Sugimoto’s photographs of opera houses (priced at $25,000 each).

Prices are indeed comparatively cheap in Tokyo, where collectors were acquiring pieces for a few hundred dollars up to tens of thousands of dollars. Several dealers offered to package works up for collectors to take with them in their luggage, shaving off additional shipping and tax costs.

For many galleries, however, sales are not their primary concern this week. “We are warmly welcoming our friends from overseas and hope they enjoy the Japanese art scene,” says Hiroyuki Sasaki, the director of Tokyo Gallery + BTAP, which is showing ceramics by Takahiro Kondo. He notes how exhibiting in the gallery “gives visitors a better understanding of [their] history and background”, which is “completely different from a fair booth presentation”. He adds that the “background of the city adds to the art work”.

Arisa Saito, an associate director at SCAI The Bathhouse, says this week is about “the opportunity to connect with the unique global community the event brings together”. She adds: “[Art Week Tokyo] is a refreshing and quite different way of doing things compared with the intense, commercially oriented nature of art fairs.”

Even if sales don’t come quickly this week, there is always the hope that introductions will convert into sales in the long run.

After a long period of decline, Japan’s market has slowly stabilised over the past decade. Chiefly due to its reliance on local collectors and its relative affordability and liquidity, during the pandemic Japan’s market only dipped by 14% compared with more than 30% in countries such as the US, UK and France.

However, many dealers note the importance of attracting an international client base. During its soft launch last year, Art Week Tokyo managed to attract 20,000 local visitors, though sales were down. Unlike Korea, for example, Japan has not been vigorously cultivating a young collector class. “We still feel the number of local collectors is limited in Japan,” Hiroyuki Sasaki says. “International collectors are essential for our gallery business, and participation in international art fairs such as Art Basel is our most important focus.”

Tomoko Ashikawa thinks the devalued yen will bring “more interest from foreign collectors”, noting how Japan’s domestic market is “too trend-sensitive—and trends are too unpredictable”. She adds: “It’s a very closed situation. Both artists and galleries need to be connected to the international art scene to be a part of art history.”

Art history aside, Ninagawa has been tasked with no small feat to bring an international collector base to Tokyo. As she puts it: “I know I am supposed to activate the market here. The question is, how do you want to go about making sales and how much pressure do you want to put on the community?”