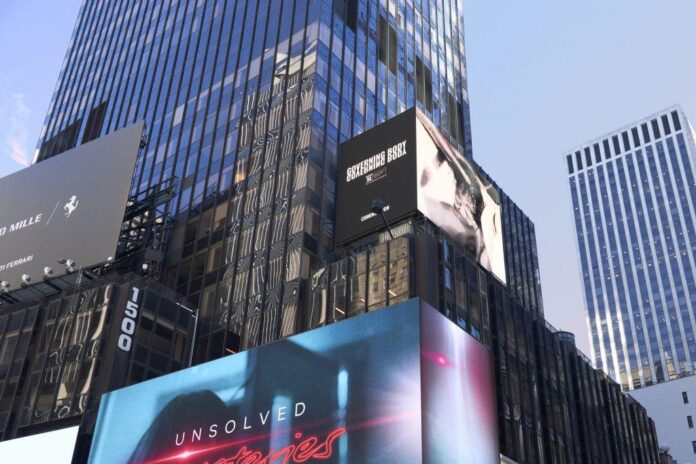 Artist Julia Weist’s forthcoming film, Governing Body, is about the history of representations of women in cinema being censored by New York’s Motion Picture Division, which was active from 1921 to 1965. So when today’s Motion Picture Association awarded her an R rating and rejected five of eight designs for promotional posters, she bought a giant billboard in the heart of Times Square advertising the project.

The image banned by the MPA? It’s a shot of a baby’s head emerging from the womb from a 1948 documentary film about childbirth, historically censored by the state of New York and still considered objectionable for all-ages audiences today.

The MPA said the 17-minute film earned its R rating due to “graphic nudity involving childbirth and some sexual content.” The childbirth billboard, it added, was too “realistic.” For Weist, that’s illustrative of a larger problem surrounding women’s rights.

“It’s a really clear example of the legacy of suppression around representations of female reproductive freedom and healthcare and bodily autonomy that really has gotten us to where we are right now, where constitutional rights can be revoked,” Weist told Artnet News. “It’s only through a century-plus of systematic control of media that such a thing as the overturning of becomes possible.”

The artist spent months combing through 7,000 archival records from the Motion Picture Division, finding examples of 464 films featuring women and non-binary people that the state deemed “indecent” and “immoral.” Based on the minimal details about each film provided in the organization’s memos, Weist tracked down as much of this censored content as she could.

“It was very tricky. Some of these films were quite obscure,” she explained. And because New York was reviewing the footage before its release, sometimes the title or year of the production would change—or the offending content wouldn’t make it into the final cut.

The shot of childbirth happened to come from an educational film called , which combined documentary footage of a woman giving birth with scenes featuring characters visiting a doctor to talk about the possibility of having children.

In the films Weist did manage to track down, she found that much of the content deemed objectionable would seem totally innocuous to today’s viewers—women dancing with “suggestive” hip movements, or even just drinking alcohol were among the things that attracted the ire of the censors.

Weist is planning to hold the world premiere at the AMC in Times Square, and to screen it in conjunction with museum and gallery exhibitions—but always in a movie theater setting. Getting an MPA rating, therefore, was more of a conceptual act than a necessity to secure traditional film distribution. (Anyone can ask for a rating for their film; for movies under 30 minutes in length, the review process costs just $750.)

“I was thrilled to learn that there was a mechanism that would allow me to see how this historically taboo content is received today,” the artist said. “But I was expecting a more open rating of PG or PG-13. There is nothing in the film that could be considered violent or disturbing. The ‘graphic’ term is referring to natural experiences of bodily autonomy for female-identifying characters, like childbirth or breast feeding.”

Weist unveiled the first part of the project this spring at New York’s Rachel Uffner Gallery, showing the other seven posters she created for the film. The MPA also ruled that images featuring Greco-Roman-style statues of female nudes, breast feeding, and even a woman smoking a hand-rolled cigarette that resembled marijuana were not suitable for all-ages audiences.

The artist hopes her project will encourage the MPA to change its standards surrounding representations of female-identified characters in cinema.

“We are disturbed that the MPA has denied approval for a film advertisement depicting a black and white image of childbirth—ironically, for a project about the history of government censorship of film,” the National Coalition Against Censorship said in statement supporting the billboard project. “We urge the association to reconsider its decision and to update its standards to avoid future anachronisms.”

And Weist hopes shining a light on New York’s history of censorship will make people aware of the work of a little-known agency that for decades controlled what was seen at the state’s movie theaters.