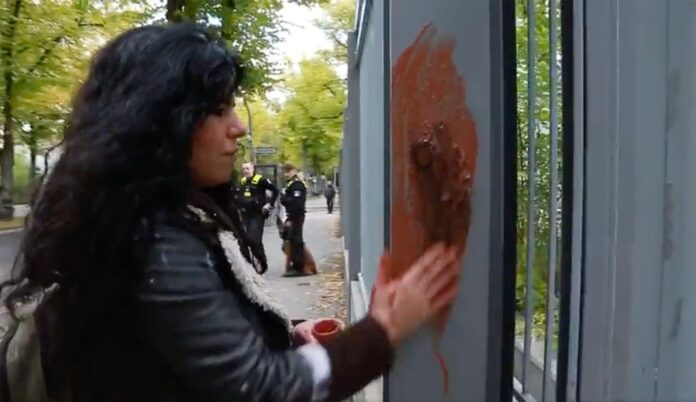 Zehra Doğan, the exiled Kurdish artist and journalist, staged a protest performance at the Iranian embassy in Berlin yesterday (26 September) following the death of Mahsa Amini in police custody in Tehran. Amini died in an Iranian hospital earlier this month after being detained by the regime’s morality police for allegedly not complying with the country’s hijab regulations, according to The Guardian.

According to a spokesperson for Doğan, the artist smeared the railings outside the embassy with a mixture comprised of henna, hair and menstrual blood. “This [action] was to support the resistance of Iranian women,” the spokesperson adds.

In a video posted on Twitter, Doğan is seen walking towards the consulate and daubing the bars; two law enforcement officers subsequently remove her from the site. The tweet says: “Berlin, Iranian [Embassy]. We are in front of them with what they curse; menstrual blood, henna and hair. We are not alone, we are everywhere!”

Doğan has since been released from custody. “They have not given any punishment now, but later on the Iranian consulate may demand a fine for damaging the property,” the spokesperson adds.

Mahsa Amini’s father has meanwhile accused the Iranian authorities of lying and says that her brother Kiarash was told that she had been beaten, according to the BBC. Iranian authorities say Amini was not mistreated but suffered “sudden heart failure”.

Amini’s death sparked mass protests in Tehran and cities including Yazd, Isfahan and Bushehr, which have continued for more than ten days. The Oslo-based group, Iran Human Rights, reports that at least 76 people have been killed in the ensuing state crackdown on dissent that has seen access restricted to WhatsApp and Instagram.

Doğan was released from a Turkish prison early 2019 after serving 25 months for “spreading terrorist propaganda” according to a Turkish court. In early 2016, she was reporting and painting from Nusaybin, a city in the largely Kurdish province of Mardin.

In March 2017, the Mardin second high criminal court in Turkey sentenced Doğan to two years and ten months in prison for posting a painting on social media that depicted the destroyed Kurdish town of Nusaybin, with Turkish flags draped over the smouldering ruins (her work was based on a photograph).

While in confinement, Doğan made pigments from menstrual blood, crushed herbs and spices, coffee grounds and kale to paint on newspaper, cardboard and scraps of clothes. She created more than 300 works in total, smuggling them out of her cell as dirty laundry.

Does the Market Only Pay Attention to Art From the Middle East During Times of Conflict?