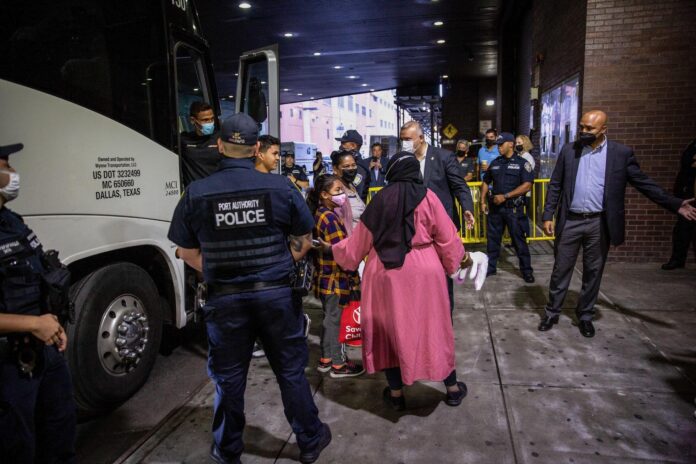 Artists Guadalupe Maravilla and Mariana Parisca are seeking donations to support a new wave of asylum seekers in New York City, whose arrival from Texas’s southern border has led to what New York mayor Eric Adams has called “a humanitarian crisis”. Their GoFundMe page, set up 5 September, is requesting funds for food and hygienic supplies to be delivered to the Lutheran Church of the Good Shepherd in Brooklyn. Maravilla’s gallery PPOW in Tribeca is serving as a drop-off site for donated goods, from clothes to old cell phones to locks, between 15 September and 17 September.

Since early August, busloads of immigrants have been arriving from Texas to New York, sent by Texas governor Greg Abbott as part of his crackdown on crossings at the southern border. Under his Operation Lone Star initiative, which was announced last year, more than 10,000 people from Central and South America who crossed the border have been forcefully displaced to sanctuary cities, with more than 2,200 sent to New York, close to 8,000 to Washington, DC, and more than 300 to Chicago. Immigrant advocates have loudly criticised the effort, which intends to “stop the smuggling of drugs, weapons and people into Texas, and prevent, detect and interdict transnational criminal behaviour between ports of entry”, as a political stunt. The Department of Justice is currently investigating the initiative for potential civil rights violations, ProPublica and the Texas Tribune reported.

“Just imagine travelling by land from Venezuela, Colombia, Panama, Costa Rica, Nicaragua, Honduras, Guatemala, Mexico with very little or no money at all,” Maravilla says. “Then to be greeted by ICE (Immigration and Customs Enforcement) in the US, held in detention, and then put on a 45-hour bus ride to New York where you don’t know anyone.”

Maravilla himself arrived in New York in the 1980s as a refugee from El Salvador. He has been communicating with newly arrived asylum seekers every day as part of his work with the Lutheran Church of the Good Shepherd, where he has volunteered since the pandemic’s onset. Its pastor, reverend Juan Carlos Ruiz, is a longtime advocate of undocumented immigrants and cofounded the New Sanctuary Movement, a network of faith-based organisations that offer refuge to immigrants at risk of criminalisation or deportation.

“The work we are doing at the church as volunteers with zero resources is to welcome them and give them warm meals and care that they need,” Maravilla says. “The church is not structured to hold large amounts of people, the toilets and stove have broken down twice. We have been making repairs and improvising from donations we raised. We don’t have beds, pillows or blankets. The food is being prepared by volunteers. We need an overnight security guard among many other things.”

PPOW decided to help coordinate donations after Maravilla mentioned his church’s work to gallery co-founder Wendy Olsoff. “The intentional shipping of asylum seekers to New York as a political weapon is just inhumane, and it was on my mind since I first read about it in August,” Olsoff says. “I immediately thought we could get the word out. The beauty of this is that items and money go directly into the hands of people—rather than a large organisation—somewhat relieving the immediate urgency of their situation.” The gallery is in conversation with the Brooklyn Museum about additional support and is seeking an art delivery service to help it transport collected items to the church.

Maravilla is also assisting with family unification efforts by providing people with funds to buy bus tickets. Documented reported that some families have been separated because they do not meet the DHS definition of a family, and many have slept on the streets while struggling to navigate the city’s housing system.

“The shelters in New York are maxed out and are not safe,” Maravilla says, adding: “There has been slow support for the GoFundMe I started. But I am optimistic about New Yorkers to pull through with the clothing drive and the physical volunteering.”