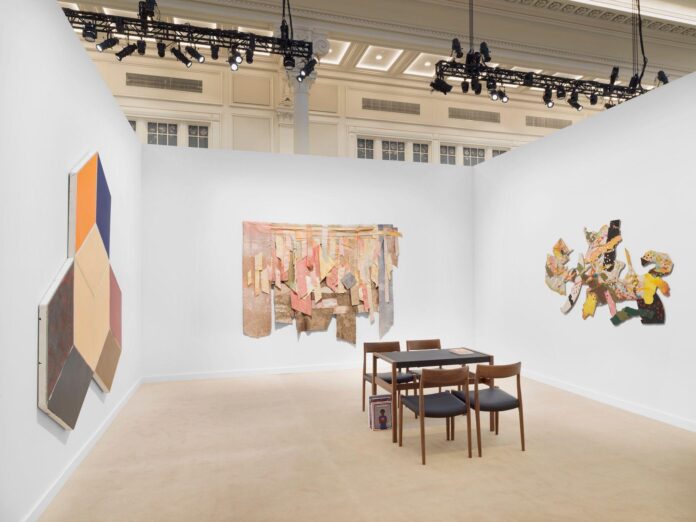 Garth Greenan Gallery’s stand at Independent 20th Century (until 11 September)—a new offshoot of the contemporary-focused Independent fair that prioritises under-explored pockets of the previous century’s art—features three works, each in a dramatically different form and all by the same artist, Al Loving (1935-2005), the Abstract Expressionist painter who only achieved widespread recognition late in life.

The untitled works, spanning 1971 to 1976, represent distinct phases of Loving’s practice and his relentless pushing of the boundaries of painting. The earliest work (priced between $250,000-$500,000) is a grid of three cube-like geometric canvases whose bold blocks of colour are offset by contrasting edges. The middle work (priced between $750,000-$1m) is one of his trademark arrangements of torn and stained canvas; ”this is one of the only torn canvas works we have left, the others are mostly in museum collections”, according to a gallery staffer. The latest work (priced between $100,000-$300,000) is a riotous arrangement of torn, collaged and painted paper. The progression across the stand looks as if Loving had cut one of his earlier geometric canvases into strips, stained them, then speckled them with dots and finally torn them into a jumble. The stand “conveys this similar energy or arc across all three works”, the gallerist says, “there are these constants in his works, like colour and rhythm”.

All across this edition of Independent, dealers are showcasing under-recognised artists or under-appreciated bodies of works by more familiar names, and these discoveries often stem from artists working against conventional uses of materials or venturing beyond the orthodoxies of their chosen medium. There are, for instance, photographs, drawings, Afrofuturist paintings, most strikingly, the cast resin sculptures of Joe Ray being shown by Los Angeles’s Diane Rosenstein Gallery (the entire stand was sold out by the end of the VIP preview). London- and Rome-based Richard Saltoun Gallery, meanwhile, is showcasing the incredible breadth of textile works by the relentlessly inventive Polish artist Barbara Levittoux-Świderska (1933-2019), with prices ranging from $30,000 to $65,000.

New York gallery Soft Network, which specialises in bringing artists’ estates to wider audiences, is showing paintings (from $40,000 to $55,000) and works on paper (priced at $12,000) by the late Haitian-American artist Paul Gardère (1944-2011). The presentation, organised in partnership with the artist’s daughter Catherine Gardère, reflects the rich range of histories and practices that informed the artist’s work, from Haitian Vodou traditions—themselves hybrids of African and Christian mythologies—to the Neo-Geo and Neo-Expressionist movements Gardère was exposed to in the Downtown New York art scene of the 1980s and 90s. The most visually striking, a trio of mixed-media works that incorporate paint, glitter, mud, metal, wood, clay and collage elements, convey the hybridity of Gardère’s identity and artistic influences.

“These mixed-media works are all about dislocations and mashups,” the artist’s daughter says. “He was very interested in the forces that are dispersing people around the world. He talked about deracination as a good thing, as opposed to notions of purity.”

A similar interest in hybridity, dislocation and the nuances of personal heritage informs a startling series of works by New York painter Vincent Smith (1929-2003), on view in Alexandre Gallery’s stand. The brightly colourful works on paper (priced at $12,000) and earthier canvases rendered in paint and sand (priced between $40,000-$75,000) were informed by Vincent’s travels throughout Africa between 1972 and 1980. Unlike the tenebrous paintings Smith made in his native New York, the works inspired by his African travels seen here are lighter, more open and reinterpret iconography he encountered during his journeys.

“He was very engaged with the local art scenes in each place he visited during his trips,” gallery researcher Emma Crumbley says. “Many of these works reference specific local traditions, like the Benin figures in Benin Shrine (1989).” By the end of the fair’s first day, engaged collectors had bought up two of the paintings on view.

Another painter whose compositions with unconventional materials made a statement at the fair—you may have heard of him—is Joan Miró. London- and New York-based gallery Luxembourg + Co is showing a little-known body of work the Surrealist made as the Spanish Civil War began in the summer of 1936, applying oil, sand and tar directly onto rough Masonite boards. The works are paired with secretly elaborate new sculptures of cans by Peter Fischli—though they resemble ceramics, their materials include seemingly everything but, from newspaper and construction paper to gouache, enamel paint and champagne chalk.

The Mirós are installed on easels throughout the gallery’s stand in order to highlight their sculptural qualities, according to gallery partner Alma Luxembourg. “They’re among his most radical works, if not the most radical,” she says. “It feels to me as though he really pushed his practice to the edge of a precipice with these works, and then came back.”

Right across the hall from the Mirós in Independent 20th Century’s fittingly historical venue, the 1909 Beaux-Arts Battery Maritime Building, is Salon 94 Design’s stand, which is devoted to the criminally under-recognised art of feminist writer Kate Millett (1934-2017). The presentation features sculptures from her series Fantasy Furniture (priced between $40,000-$110,000) and minimal anatomical sketches of friends and lovers (priced between $10,000-$12,000).

Both bodies of work reflect a cheeky sense of humour, with the sculptures especially—in their anthropomorphising of conventional domestic forms and inventive use of materials—pushing at the boundaries between functional and fine art objects. “At one point she had hoped to mass-produce the Fantasy Furniture to make it widely accessible, but that never came to fruition,” gallery director Zoe Fisher says. Still, it’s not hard to imagine how an irreverent sculpture like the table-cum-cabinet Blue Eyed Marble Box (1965) might have tempted art and design collectors alike. Collectors on the fair’s VIP day were so tempted they bought one of the Millett’s sculptures and four of her works on paper.