Home News Balenciaga Blows Up With an In-Store Art Installation That Translates Its Fall... 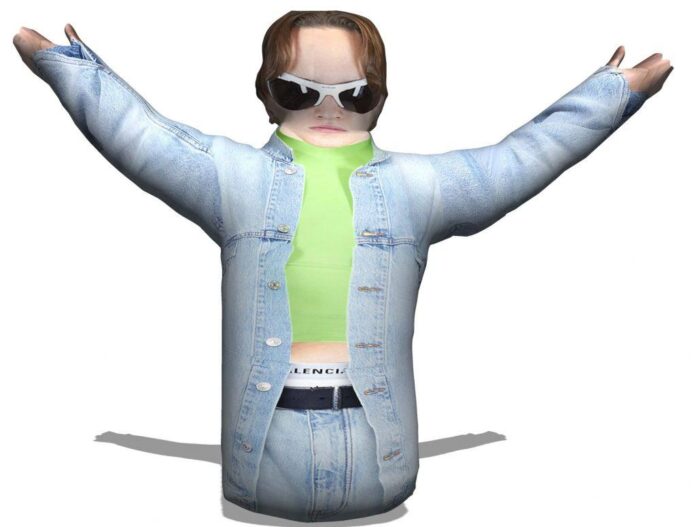 Inflatable air puppets are no longer relegated to beckoning passersby into roadside gas stations and car washes. Thanks to Balenciaga, the floppy fun bags have entered the luxury realm. Eschewing chic, featureless mannequins, the brand opted for blow-up kinetic sculptures of its fall 2022 runway models for the windows of its midtown Manhattan flagship.

“For me, the excitement is you have no idea how they’re going to come out,” said Rosie McGinn. the 28-year-old artist responsible for the billowing tableaux. “They always look a bit stranger than you’d imagine.” 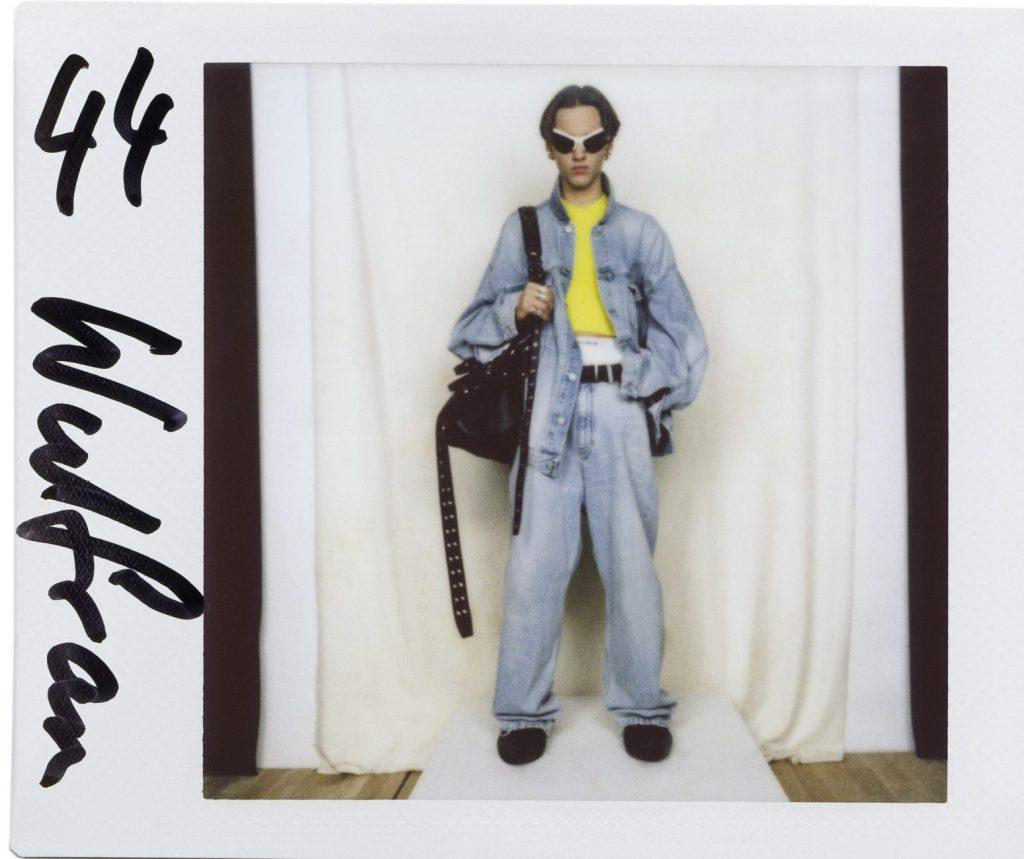 McGinn is the latest artist-in-residence for the brand’s “Art in Stores” initiative (past participants have included Anna Uddenberg and Tejo Remy), and Balenciaga’s creative director, Demna, handpicks the collaborators. Given Demna’s skill for elevating the everyday into his fashion vision, its little wonder McGinn’s wry and playful worldview made an impression.

“Honestly, when I first got the email from them, I had to send it to my boyfriend to confirm it was real,” says McGinn, who is employed as a gallery technician when not in her own London studio, in Lewisham. “It was a new experience to work in fashion rather than in the art world,” she said. “It took quite a few back-and-forths and edits, but it was pretty straightforward.”

The puppets’ poses range from standing at attention with triumphantly outstretched arms to slumping, shapeless masses heaped on the floor (a timer triggers them). The fascinating transition from cheery float to flaccid grotesquerie and back again is one reason McGinn was drawn to this peculiar medium. “It’s like ten seconds of joy and then two minutes’ deflation afterwards,” she says. “The work is talking about humans always wanting to chase their high and then the reality of the comedown.” They might blow up, but they won’t go pop: Rosie McGinn’s kinetic sculptures adorn the Madison Avenue flagship’s windows. Courtesy of Balenciaga.

After the initial install earlier this summer, only one fashion dirigible remains at the Madison Avenue locale (it will be on display until October). It will then travel to Los Angeles, followed by Toronto. The other sculptures are currently touring stores in Europe and Asia.

McGinn’s first dalliance with air puppets was in her 2018 Wimbledon College of Arts master’s project. “Full Howse” depicted a gargantuan woman in a leopard blouse whose sublime Bingo-winning victory collapses into a mound of deflated corporeality. “I was gonna get a company to make it for me,” Rosie says, “but obviously, I was skint ‘cause I was a student.”

So, the artist developed her own process for making the balloon sculptures by hand. “I take pictures of the front and back and all the details of hands and stuff like that,” she says. “Then I edit them and get them printed on ripstop nylon, which is parachute material. Then I cut and sew it all together. That’s basically the premise, but obviously there’s a load of technical stuff.” Added to that is the same inflation mechanism that powers bouncy castles, a lot of air, and participation from friends and family. 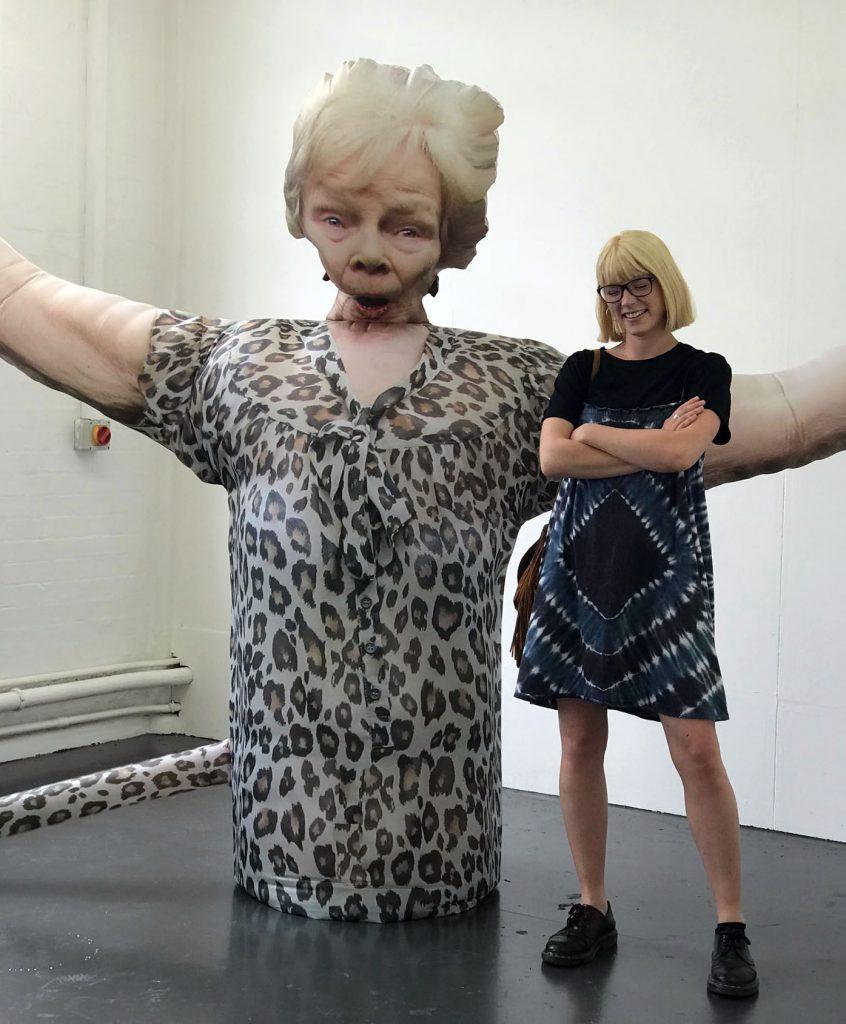 Rosie McGinn poses with the air puppet of her Bingo-enthusiast grandmother. Courtesy of the artist.

McGinn’s grandmother was the model for her Bingo colossus, snapped at a house party the artist threw. She made impromptu photographs of her guests, then turned them into a DJ and reveling ravers for a solo show, SNOB, at Birmingham’s Recent Activity. She has also shown a series based on sports. “I was looking at how humans go to these rituals and events where they seek out winning,” McGinn said, “all these situations where you put yourself around people in communities to feel alive.”

A multimedia artist, sculpture is McGinn’s main focus, but she just wrapped “Cosmic Dancer,” a show of air puppets and paintings. While further group exhibitions are being confirmed, she is enmeshed in an upcoming video project loosely based on the “overview effect”—“which is how astronauts feel when they see the earth floating in space for the first time,” McGinn explained. “It will have this psychological aspect mixed in with my sculptures.” 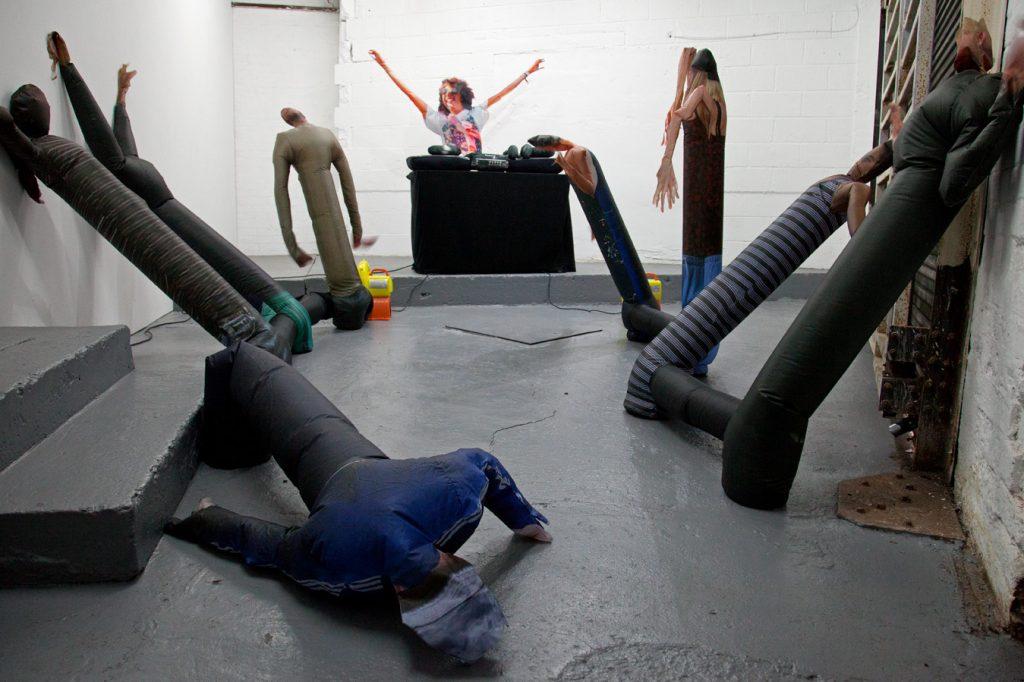 Raise your hands in the air! An installation view of Rosie McGinn’s “Ravers” (2019). Courtesy of the artist.

McGinn said she was inspired by William Shatner’s post-space jaunt interview from his Blue Origin rocket mission. “It’s this surreal moment,” she says. “Champagne is popping in the background, and William Shatner is obviously so affected by what he’s just seen and he’s really trying to explain it. It’s quite beautiful and raw, and then Jeff Bezos is standing next to him like a robot trying to absorb his humanness. Basically, it’s this idea of humans wanting to go to space, and how mad it is that we are wanting to leave Earth when we’ve left it in a bit of a mess.” Still, the artist sees a common thread: “It’s that constant search for something, exploring all corners of the universe. We’re quite restless creatures.” 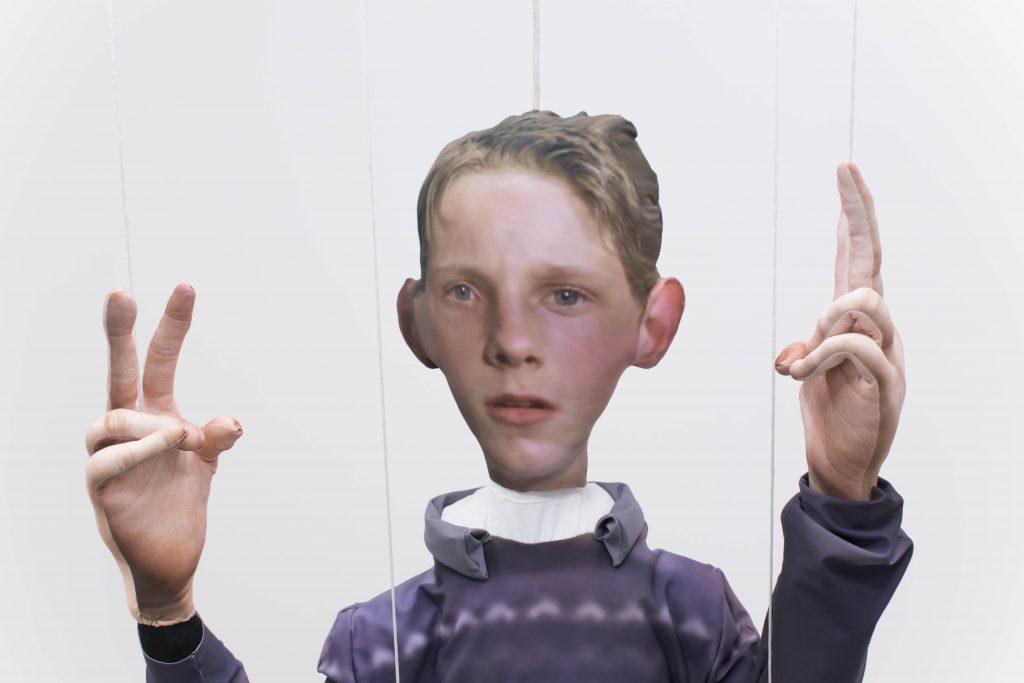 A detail of Rosie McGinn’s handmade air puppet (2022), shown at Newcastle upon Tyne’s Slugtown gallery. Courtesy of the artist.