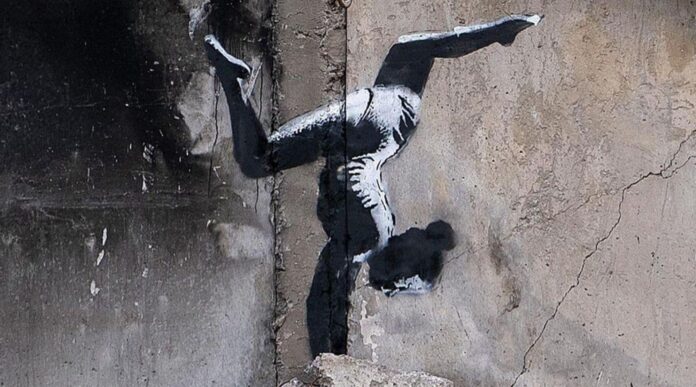 The secretive artist and prankster Banksy has ventured into Ukraine amid Russia’s ongoing war there, painting a series of murals in various cities in the

One image shows a gymnast doing a handstand, painted within the ruins of a bombed building in Borodyanka, around 54km northwest of Kyiv; another depicts a woman in her dressing gown, hair in curlers, wearing a gas mask and wielding a fire extinguisher. In another piece, two children use a metal tank trap as a seesaw; while a fourth work shows a bearded man taking a bath. In a fifth piece, Banksy appears to have incorporated existing graffiti of a penis, turning it into a nuclear warhead loaded onto the back of an armoured truck.

Russian forces invaded and occupied Borodyanka early on in the conflict, including the bombing of many civilian areas, leaving a trail of death and destruction as they fled weeks later, spurring calls for the Russians to be tried for war crimes.

The town’s gutted, collapsed, twisted and burned-out buildings became some of the most widely circulated images of the damage inflicted on Ukrainian communities by the Russian military following its withdrawal.

Rumours have swirled over the past day that two other murals recently spotted in Ukraine—one depicting a child defeating an adult with a black belt at judo (a sport beloved of Russian president Vladimir Putin) and another of two children using one of the ubiquitous steel “hedgehog” tank traps as a seesaw—were works by Banksy.

This is hardly the artist’s first intervention in a conflict zone. Most notably, beginning in 2005 he created a series of murals in the occupied West Bank, including painting directly on the Israeli West Bank barrier. In 2017 he was involved in the opening of a boutique hotel, the Walled Off Hotel, directly next to the barrier in Bethlehem.

More recently, he waded into the European migrant crisis, creating a mural at the migrant camp in northern France known as “The Jungle” and, in the summer of 2020, funding and painting a boat that plied the Mediterranean to help migrants attempting to reach Europe by sea aboard overcrowded and unsafe craft. The rescue boat itself eventually had to be rescued.