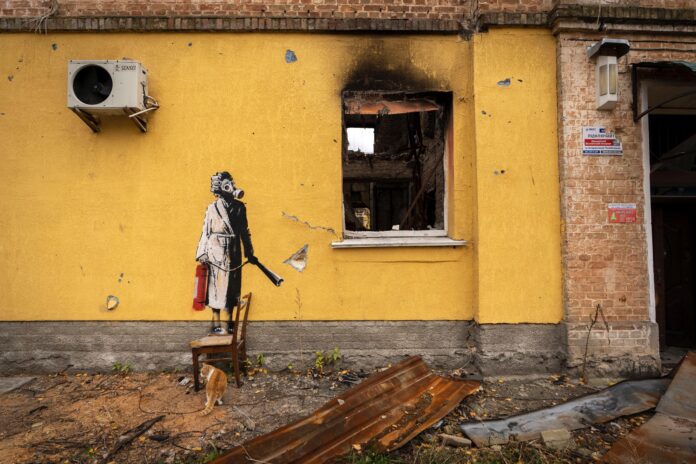 The British street artist Banksy has confirmed he has created seven murals in various locations in Ukraine, including the capital Kyiv, the suburb of Irpin and the town of Borodyanka—among the places hardest hit by Russian bombardments.

Speculation had been mounting that the anonymous artist was in the war-torn country after three works were spotted last week. One mural depicts a man said to resemble the Russian president, Vladimir Putin, being thrown to the floor during a judo match with a young boy—Putin holds a black belt in the sport. Another work shows two children using a metal tank trap as a seesaw, while a third mural, painted within the ruins of a bombed building, is of a gymnast doing a handstand.

Banksy has now confirmed these as well as a further four works. They include a woman in her dressing gown, hair in curlers, wearing a gas mask and wielding a fire extinguisher; a bearded man taking a bath; and another piece in which Banksy appears to have incorporated existing graffiti of a penis, turning it into a nuclear warhead loaded onto the back of an armoured truck.

Borodyanka, a town around 54km northwest of Kyiv, was besieged by Russian forces early on in the invasion and subjected to aerial bombardment. It was recaptured in April, and Ukrainian investigators subsequently found dozens of mass graves where the bodies of civilians, who had been tortured and killed, had been buried. There have also been calls for investigations into alleged Russian war crimes in Irpin and neighbouring Bucha.

The new works are Banksy’s first public murals in more than a year, though this is not the first time his work has been associated with Ukraine. In March, a print of one of his most famous anti-war pieces, CND Soldiers, was sold at auction, raising $106,505 for a children’s hospital in Kyiv. The original mural first appeared outside the Houses of Parliament in London in 2003, during protests against the war in Iraq.