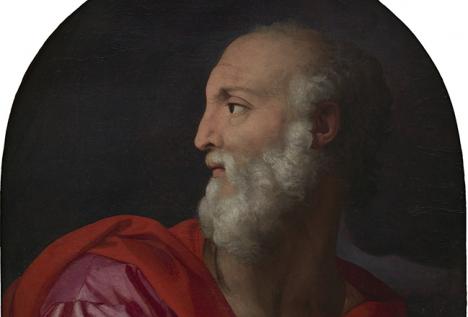 The loud and long-lasting international scandal associated with the fake works of the old masters was complemented by another event. French customs officials have detained in the country the work allegedly created by Italian maniac Agnolo di Cosimo, also known as Bronzino. The painting “Saint Cosmas” (ca. 1544) was shown at the Jacquart André Museum in Paris and was loaned by the American collection of masterpieces of Italian painting “Alana”. The authorities informed the museum staff that after the end of the exhibition, the work was banned for export.

The painting is associated with the notorious French art dealer Giuliano Ruffini, suspected of selling dozens of paintings by old masters, some of which were found to be fakes.

The sale of fakes, which Ruffini organized with his son Mathieu and Italian artist Lino Frangiya, is estimated at more than 220 million dollars. The works were sold through auction houses and dealers in London, Paris, New York and Milan. Last spring, an arrest warrant was issued for Ruffini and his son. So far, only Frondjia has been arrested.

Among the forgeries was a portrait allegedly made by Frans Hals. It was sold to a private collector from Seattle for $10 million, which Sotheby’s returned after studying the work. Another alleged forgery, “Venus with a veil” (1531) by Lucas Cranach, was taken from an exhibition in southern France in March 2016 by the same organization that runs the Jacmar André Museum of Art. “Saint Jerome”, attributed to Parmigianino, was sold at Sotheby’s auction in 2012 for 842.5 thousand dollars. Later it turned out that it was a fake, and Sotheby’s filed a lawsuit against the seller of the painting, who refused to return its share of the profits from the sale. A court in the United States ruled in favor of the auction house.

“Saint Cosmas was bought in 2011 by Chilean billionaire Alvaro Sayeh and his wife Ana Guzman for their private Alana collection. Since the 1990s, the couple have collected a significant number of works of Italian art. The exhibition at the Jacmar-André Art Museum displayed “Saint Kosma” together with “Portrait of Cosimo Medici” by Bronzino. A representative of the Alana collection told Art Newspaper that “both paintings were bought on the English art market from dealers we trust and who informed us about their provocation”. The museum refused to say whether the investigation covered other works in the collection.

The “Holy Space” was first exhibited in 2010 at the Bronzino retrospective in Palazzo Strozzi in Florence. An expert on Florentine painting Costamagna told the investigators that he had personally confirmed the authenticity of the work before it was included in the exhibition. He claimed it was an authentic Bronzino work, pointing to “pentimental” or visible changes that the artist made during its creation. However, as specialists note, there is “a series of fake works of manière painters, written on the basis of real drawings or sketches of the artists”.