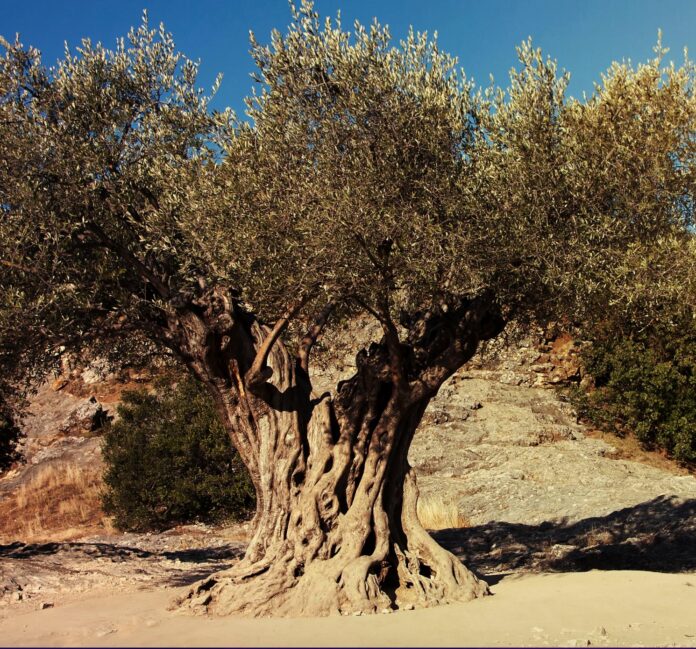 Planted among the olive groves of the Palestinian city of Hebron in the West Bank are structures that bear no fruit. Israeli-owned security cameras dot the landscape 300 feet apart, as they do in much of Palestinian occupied territory—one of the most surveilled places on earth.

Recently, this technology has stepped up a notch. Sophisticated facial recognition is now being used to capture the faces of the West Bank’s occupants. Their image is then matched to a database described by a former Israeli solider as the military’s “Facebook for Palestinians”.

Yesterday evening, another camera was installed in an olive grove in Hebron. But instead of capturing footage for Israel’s central government, the camera will be used to broadcast a livestream. This Friday, at 18:00 CET, a number of European museums, including Bonniers Konsthall Stockholm, Sweden, Nitja in Lillestrøm, Norway, FOAM in Amsterdam, Holland, and SI Fest in Savignano sul Rubicone, Italy, will screen the livestream, revealing to their audiences the realities of life in the West Bank. The livestream can also be viewed online.

This subversive work, titled Counter Surveillance, is the first initiative of the artist project Artists + Allies x Hebron (AHH) that hopes to draw focus on the living conditions and political struggles of Hebron’s Palestinian residents. Founded by the artist Adam Broomberg and the Hebron-based Palestinian activist Issa Amro, it receives financial support from a number of Palestinian and German private donors.

“Our version of the electronic gaze does not seek to control, punish, or instil fear,” Broomberg says. “Rather, it is an attempt at a community-building strategy that spans the globe, and an opportunity to demonstrate solidarity by ensuring that the courageous residents of Hebron are not only surveilled but also seen,” he adds.

Olive trees are a central part of Palestinian life, with their cultivation accounting for around 14% of the nation’s economy; 100,000 Palestinian households rely on olive farming as their primary income. As a result, olive trees are a common target of settler violence. A total of 800,000 olive trees planted in Palestinian territories have been uprooted by Israeli authorities and settlers since 1967. Between August 2020 and 2021, more than 9,300 olive trees were destroyed in the West Bank.

The livestream therefore functions as a way for the world to keep vigilant watch over the trees, some of which are more than 900 years old. According to Broomberg, a “cybersecurity specialist” was hired to ensure that the 4G connection from the custom made camera cannot be intercepted .

More broadly, the project has been initiated to deepen the public’s understanding of Hebron, which Broomberg refers to as a “microcosm” of the “Israel’s wider apartheid regime in the West Bank”. Hebron, an historically important city for Abrahamic religions, is currently divided into two sectors. H1, controlled by Palestine, and H2, the old town, which is under Israeli military control. More than 30,000 Palestinians live in the latter sector, along with around 700 Israelis, whose settlement is widely considered to be illegal by the international community, although the Israeli government disputes this.

The Palestinian population in H2 is dwindling due to the hostile nature of life for residents, with curfews, restrictions on movement and settler harassment commonplace. “In my lifetime I’ve seen the streets and markets completely empty,” Amro says. “Hebron is now a ghost town. 22 checkpoints, 100 movement barriers, hundreds of shops closed, more than 1,000 Palestinian apartments emptied,” he adds.

“I’ve never seen anything like Hebron, including during my own experience living under South African apartheid, says Broomberg, who is from Johannesburg.

The next step for the AAH project is to establish a residency in Hebron. The pair are unwilling to reveal which artists they have confirmed to come, but describe them as “internationally celebrated, famous”.

AAH is also working to help build legal cases which will prevent Palestinian families in the northern hills of the region from being evicted in order to make way for an Israeli military shooting range.

According to Broomberg, enshrined into the Israeli constitution are two laws: the first declares all Israeli land can be made agricultural. The second rules that no military activity can occur on agricultural land. AAH are now in the process of planting olive trees on the lands of each of the Palestinian families at risk of eviction.