Home News Carving of man holding his penis and surrounded by leopards is oldest... 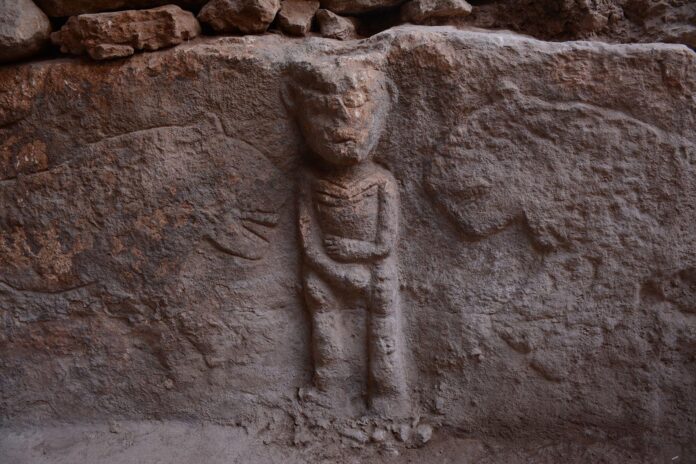 A panel carved into a Neolithic bench in Turkey portraying a series of interactions between humans and animals may be the earliest known depiction of a narrative scene. The discovery of the relief, believed to be 11,000 years old, was published today in the peer-reviewed journal Antiquity. The scene may shed light on how ancient communities kept their values alive, according to archaeologist Eylem Özdoğan, who authored the study.

“We can think that more holistic stories are beginning to form here—that this [scene] is decisive in forming the life ideology of the community and is passed on to new generations,” Özdoğan tells The Art Newspaper. She notes in her research that the panel has “the narrative integrity of both a theme and a story”.

Older examples of narrative art have been found around the world, the most famous being the cave paintings of Lascaux, which are estimated to be around 17,000 years old.  In 2017, archaeologists on the Indonesian island of Sulawesi found what is widely acknowledged as the “oldest pictorial record of storytelling”: a panel in a remote cave of eight figures hunting pigs and anoas that dates back about 44,000 years.

But the carvings in Turkey stand out from these older images because the scenes across the panel are related yet can be distinguished—they progress, not unlike frames on a film strip. Their location in a communal building of an ancient settlement also suggests that they were intended for a large audience.

“The biggest difference is that cave paintings are made in places that are not accessible to everyone—they are hidden and not seen by everyone,” Özdoğan says. “But the Neolithic images must have served in the assembly areas so that everyone can learn the story. Therefore, they can be seen as the first ontological narratives.”

The ancient carved bench was unearthed in 2021 at the site of Sayburç in southeastern Turkey, which was largely covered by the construction of a modern village in 1949. It was found in the remains of a communal building, excavated from beneath two houses, its size and structural features suggesting that it was a place for special gatherings.

The 0.6m-wide bench shows, on the left, a bull facing a human with a phallus-like form on the abdomen, who rings a rattle at the animal and whose back is turned to three other figures. These comprise two toothy leopards flanking a figure holding its phallus. The image reflects known styles and themes of the Neolithic, Özdoğan writes in the paper, with an emphasis “placed on predatory and aggressive aspects of the animal world”. She adds that the technique and craftsmanship recall other human-animal representations found in Turkey, including a sculpture of a human figure carrying on their back a leopard at Karahan Tepe, T-shaped pillars in Göbekl Tepe, and sculptures from Nevali Çori of stacked human and animals.

According to Özdoğan, the horizontal orientation of the Sayburç panel makes it distinct from such contemporaneous images, representing humans and animals on equal levels, which creates a different effect. “The direction and stance of the figures imply that two related scenes are present,” she writes. “While the other figures [on the left] are facing one another, only the male figure—in high relief—faces into the room, staring into the interior.”

Özdoğan has not shared a specific interpretation of the image but believes that it preserves one or more related events. More broadly, the scene reflects the relationships between humans and animals as the former transitioned to a more sedentary lifestyle in the Neolithic period.

More answers may emerge in the future, as archaeologists have excavated only half of the communal building to date. They plan to demolish the modern houses that covered the site in future field seasons.

Is This Scholarly British Art Professor the Real Banksy? Students on His Campus Certainly Think So