Home News Choreographer Gisèle Vienne on How the Euphoria of Partying All Night Shaped... 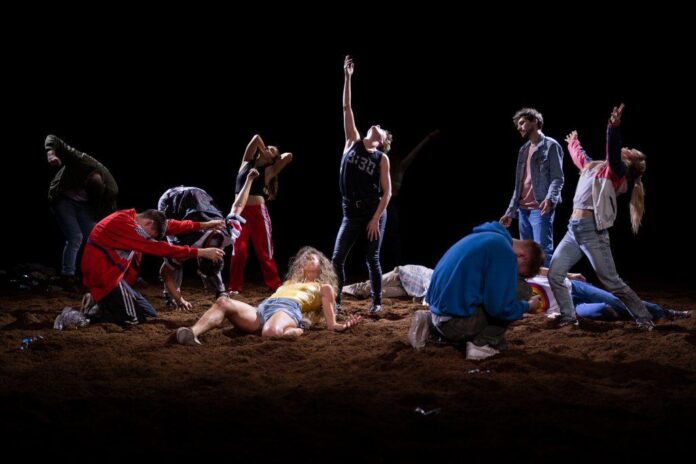 Whenever techno or rave crop up as themes in popular culture, it’s usually as a setting for local news investigations or corny crime TV shows. It’s exceedingly rare for the scene to be portrayed with an air of truth, emotional resonance, or even accurate music. With the stunning modern dance piece Gisèle Vienne captures the agony and ecstasy. She understands that 8 a.m. moment when one questions, “Am I celebrating or spiraling?”

will be presented tonight and tomorrow in Los Angeles at the L.A. Dance Project Studio (both shows are sold out). Originally performed in Vienne’s native France in 2017, earlier this month ’s stateside debut was the pulsing dark star at Brooklyn Academy of Music for Dance Reflections by Van Cleef & Arpels, the brand’s initiative for contemporary choreography. 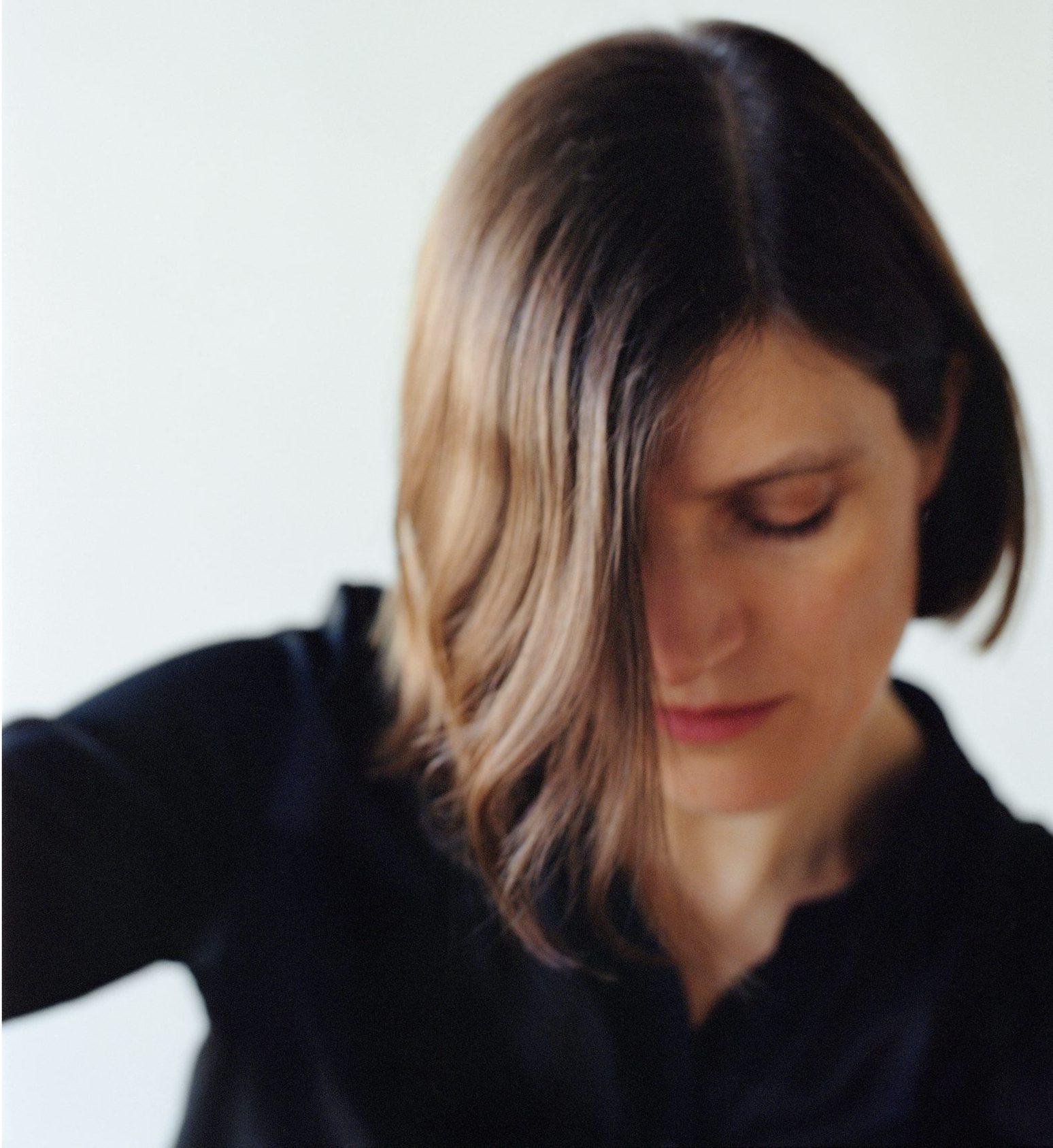 Set to an exquisite soundtrack of mostly 1990s Detroit techno by artists such as Underground Resistance and Jeff Mills, Vienne’s troupe emerges in glacially slow motion across a dirt-covered stage strewn with garbage. It slowly becomes apparent that we’re witnessing a nocturnal forest throwdown. The dancers coalesce and freeze into what looks like a perfectly composed photograph. Then it all falls apart. Time, space, and reality intersect and collapse, and violence infects the revelers. Pounding beats morph into somnambulant haze and back again. It’s profoundly unsettling and absorbing, a study in euphoria, alienation, and everything in between. It’s a journey of peaking and comedowns.

“The performance is a living entity,” said Vienne, who adapted the piece for the outdoor L.A. performance (it will incorporate a parking lot complete with cars). “Space is a character. It’s like having a new dancer coming in. It’s exciting.”

Vienne studied philosophy, puppetry, music, dance, and art and manages to combine all of them in her singular practice. We spoke to her last week as she was preparing for a two-night Montreal residency about and life.

It’s clear that you know this topic. When did you start formulating this piece?

It was unfolding for years…I would say 17 years of work that brings me here. For two years I was actually working with by Stravinsky and I wanted to do a type of partying together that would be more late 20th-early 21st century, and that’s when I switched to techno. I’m very interested in alternative music; it can be techno, metal, reggae, punk. These are amazing spaces that are considered by a capitalist system as just about people getting wasted on drugs when it’s a true counterculture where people gather and share strong experiences. I’m not an anthropologist or sociologist, I’m very much in the techno scene. So I can talk about what I see from there. 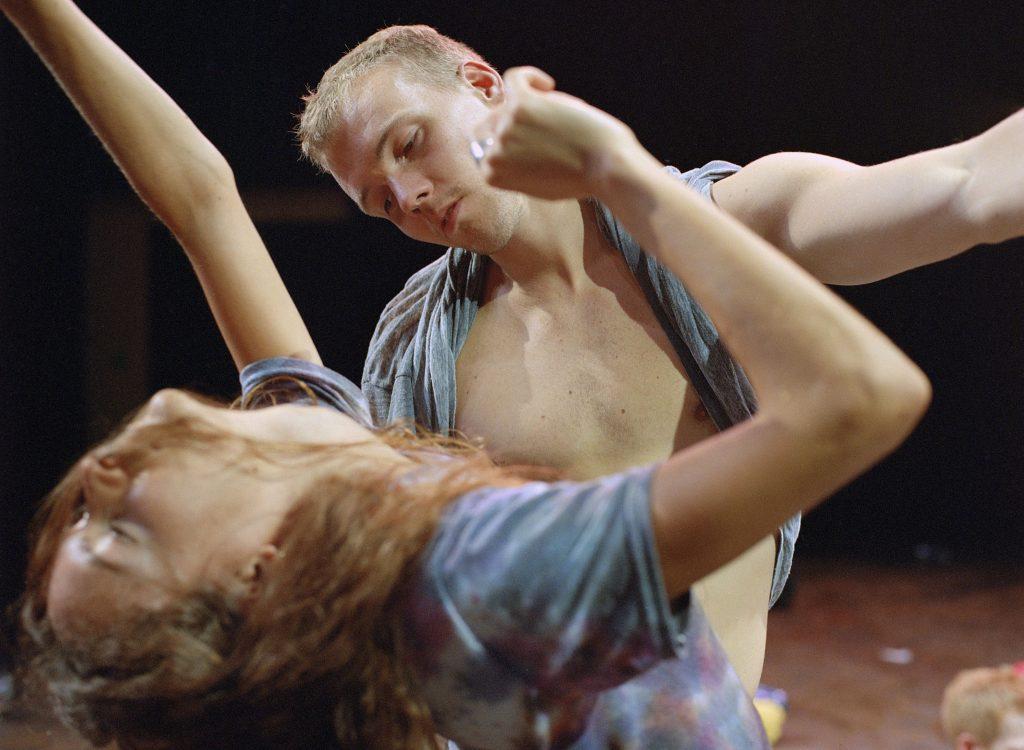 I lived in Berlin in the early ’90s. Detroit techno was super important, especially with the Tresor club, which used to be in a basement of a bank. Also when I was working on it, around 2015–17, I was hugely in love with a woman in Berlin, so it overlapped with my present. I wanted to find an artistic language that can unfold in space the experience of time. It’s all in the present, but it overlaps the experience of time. What happened in 1992? In 2015? Last week? What happens in my memory? What happens in my imagination? How can I unfold all these layers of perception?

It was fascinating to see dancers moving in slow motion ignoring a pummeling beat. This tapped into the feeling of disconnect inherent in partying. You captured the alienation and isolation that can also be there.

gets very intense. I really hope performance and art can be an important and meaningful experience. When I’m going out all night long for dancing, it’s not a random thing. It’s a very special experience for me to do that. The interactions with people are totally different in this emotional rollercoaster. I’m also very interested in how it allows us to see differently or to interact differently. How strong emotions that can be love, eroticism, fear, shyness, anger—this alters your way of perceiving time and reality. At the core, the work is very much the question of: how is our perception culturally built up and how does it get alternated through experiences and emotions? If I’m very much in love or if I’m very angry, my physicality and what I’m seeing and not seeing will be completely different. This is at the very heart of what I would say is this research project.

During the performance I would be concentrating on what would seem like the dancer performing the lead but then in the background there would be others performing completely different narratives, some quite violent or sexual. Does have a storyline?

There are 15 different stories. The density of narrative is impossible to embrace when you watch it once. This is consciously built up like a dense Brueghel painting. As a director and choreographer I create specific framing; this is the lead story I’ll invite you to follow, but you can watch around it. I also work with archetypes that each audience can recognize—people and situations that they would know or remember. People see pretty different pieces when they see , and that’s on purpose, because you can easily switch from one to the other. 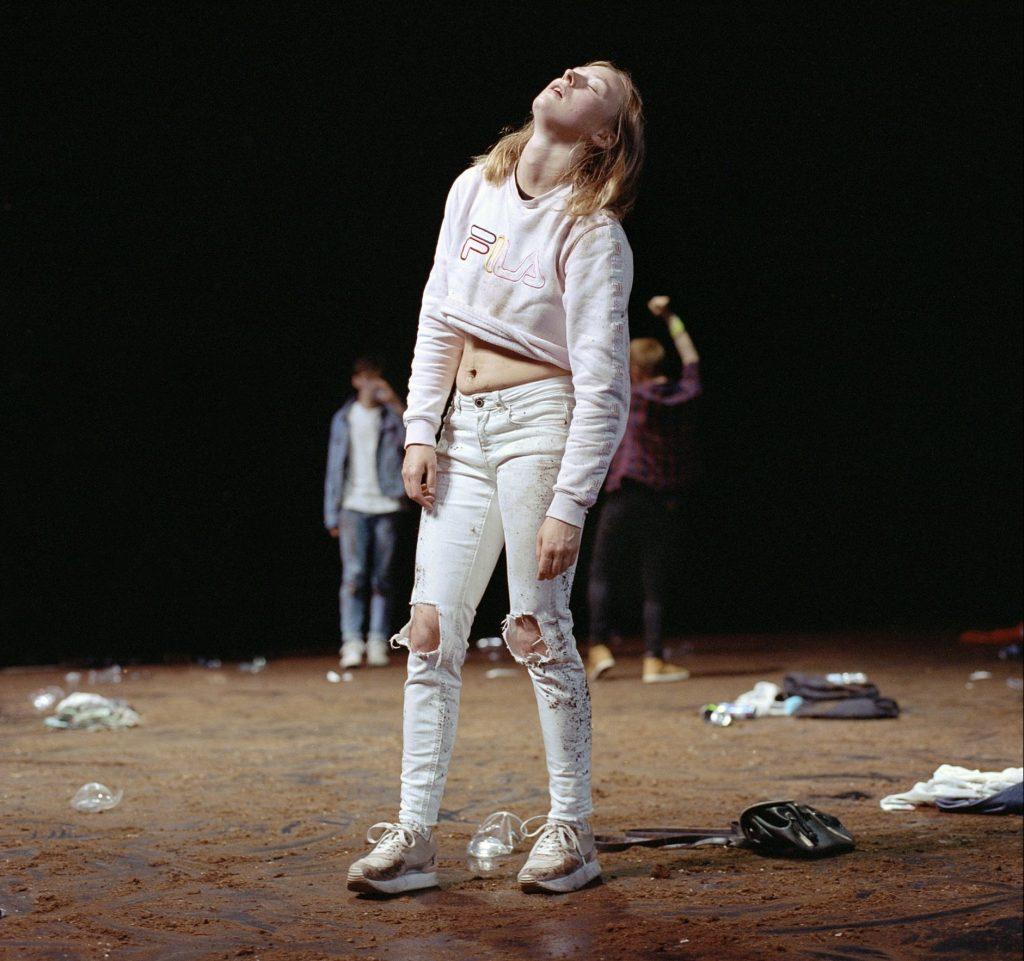 The euphoria and the comedown of . Photo: Estelle Hanania.

The styling and costuming evoke nightlife archetypes—there is even that “loser” guy who looks like he shouldn’t be at the club who is always at the club. Regardless, by the end, everyone is filthy.

Of course I think about material, colors, and shape. But the first thing in creating a costume is also working on a character and sociological meaning. I want to also say, don’t underestimate the impact of contemporary dance. I do know it’s important culturally, but it is very much niche. But I do think it’s interesting to see how contemporary dance and experimental music are having a cultural impact. Do you know how many fashion designers came to see ? How many moodboards my work is on?

You wrote the dramaturgy with American author Dennis Cooper, who’s renowned for his gay transgressive punk fiction. You’ve collaborated before.

We work differently each time, it’s kind of reinventing each time we collaborate. First is observation. Dennis would see the first rehearsal and the dancers and myself. He would observe what is growing in terms of directions of characters. From there, Dennis and the dancers wrote texts and narratives on each character. In the end we had this list of texts that create all these narratives that then we interpret. These stories can be very close to the dancer’s life or they can be fictional things that the dancer really wants to play. It’s interesting because the fiction can say just as much about who the dancer is as the nonfiction.

Watching the chaos unfold onstage in this outdoor setting, it struck me that these people were turned into mythological beasts, like bacchanalian satyrs in the woods. It reminded me of the Flannery O’Connor story “A Circle in the Fire,” or Donna Tartt’s where ancient paganism bleeds into modern reality.

is trying to create new mythologies. The structure is still exactly . I’m not quoting it too obviously, because I don’t want it to turn into be the new version, but I don’t want to hide it either. The structure is completely the ones you would find in rituals from Indonesia to Ethiopia to Hawaii; that is exactly the dramaturgy. And I try to not only use archetypical characters, but also recurrent situations. What is the scenario that is given from society about the behavior pattern? You can always play and struggle and fight with it, but there is a pattern, there is a scenario that is called sociology.

You studied philosophy. How did that lead to puppetry school at École nationale supérieure des arts de la marionette?

My longest studies are actually music and visual art. I had a very early passion for movement. I was excited by moving sculptures. When I was very small, I was lucky enough to discover works by Jean Tinguely and Alexander Calder and I loved . I loved the meaningful as well as stupid and grotesque, and there is something really epic and overdramatic in . I love being over the top, I love kitsch and Schoenberg, I love Pop and Jim Henson, all these passions. And then I was very much into literature and philosophy, and that’s where I first went to school because to be very frank, I’m doing psychotherapy right now. When I started small as a dancer, I started ballet and it was very terrible experience for me. For many years I felt my body was handicapped. And so I put all my creativity outside of my body with sculpture, painting, or music. I felt illegitimate to work with my body.

To make it short, I landed in philosophy, but still had a huge passion for music and movement and painting. Throughout my studies, I couldn’t put it in words, but I was missing the physicality. I had to slide into physical work, and where I landed was puppetry. It took a long time before I felt allowed to work in choreography, and the heart of my passion is dance. It took a long time to make that journey. I’m not a philosopher at all, but I do really appreciate that I can deal with a lot of philosophy as a choreographer. 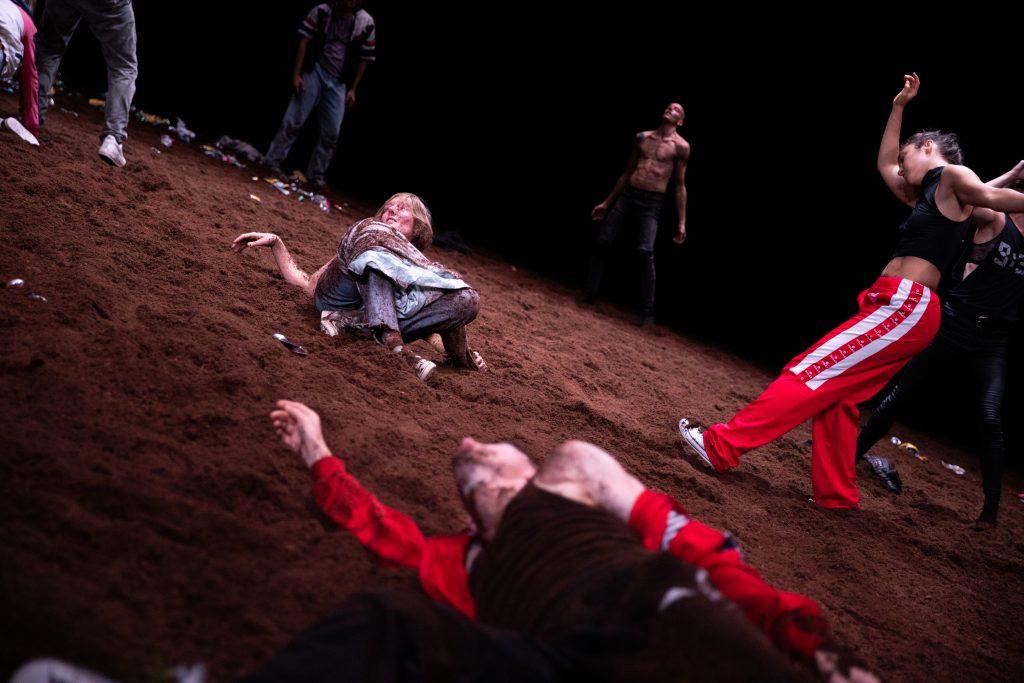 The aftermath of at the Brooklyn Academy of Music earlier this month. Photo: Maria Baranova