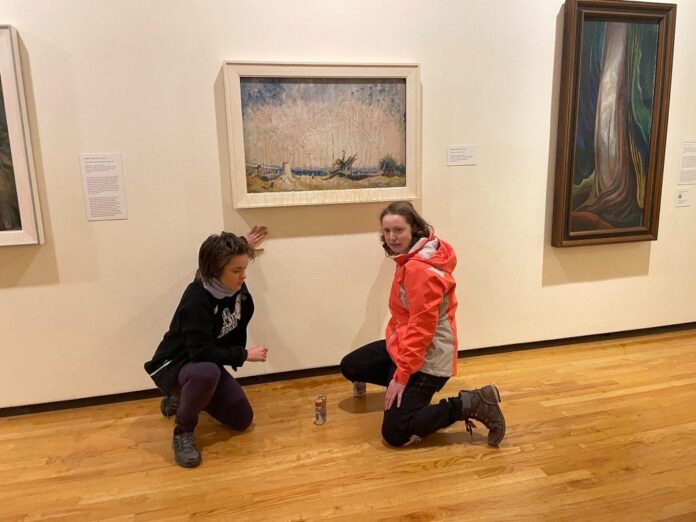 The frequent attacks on art by climate activists that have been making headlines over the past month have tended to be concentrated in western Europe. This may no longer be the case.

On Saturday afternoon, two women linked to the group Stop Fracking Around threw maple syrup at a painting by Emily Carr at the Vancouver Art Gallery in Canada before gluing themselves to the wall underneath. They were filmed by a third accomplice.

Stumps and Sky (1934), a landscape painting, has not been permanently damaged by the action, the gallery confirmed. It said it is working with the police who are investigating the incident but no arrests have been made.

The artwork has been understood as a lament over the commercial exploitation of old growth forests, offering some resonance with contemporary environmental issues.

“The Vancouver Art Gallery condemns acts of vandalism toward the works of cultural significance in our care, or in any museum,” said the museum’s director, Anthony Kiendl, in a statement.

The activist group is calling for an end to the Coastal GasLink pipeline that is currently under construction in British Columbia, passing through several First Nations peoples’ traditional and unceded lands, including Wet’suwet’en territory.

“I think any amount of publicity we can get as an organization is worth it because the climate crisis is the most pressing crisis of our time,” one of the protestors, Emily Kelsall, told CBC News.

The other protester who glued herself to the wall is 19-year-old Erin Fletcher. In a statement she said, “when we go over 2 degrees Celsius increase in global average temperatures, we are looking at death and starvation at an unprecedented scale due to inaction on climate change.”

“And the government, instead of acting responsibly, is building fossil fuel infrastructure. They’re doing the exact opposite of what science and ethics is saying we need to be doing.”

Jelena Saf, 24, web developer, worries about the future of her loved ones: “I have two younger sisters. I am here to fight for their future, because our government is failing to bring this crisis under control. We are on a highway to climate hell” pic.twitter.com/q09fc8cnI6

Another recent climate action saw two activists from the group Last Generation glue themselves to the base of a dinosaur skeleton at the Natural History Museum in Vienna. A previous attempt to do this had been intercepted in September.

The escalation of attacks was prompted by an incident where climate activists associated with Just Stop Oil threw tomato soup over Van Gogh’s Sunflowers at the National Gallery in London on October 14. Since, works by Monet, Vermeer, Goya, Botticelli, and Raphael have also been targeted, and an attempted attack on Munch’s The Scream was thwarted on Friday.

Museums are ramping up their security in order to try and minimize this growing threat to their collections. Several experts spoke to Artnet News about what measures can be put in place, including bag searches and special training.