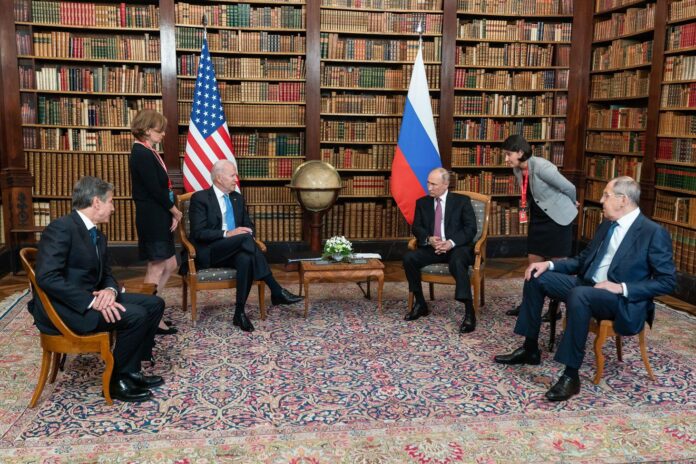 In May, Russia officially withdrew from a memorandum of understanding with the US in the field of culture, education and the media, in effect closing the door on cultural exchange in a move that takes both countries back to the heightened Cold War era that lasted until the collapse of the Soviet Union in 1991. The US Embassy was informed of the move on 1 June.

The memorandum, signed in September 1998 under presidents Bill Clinton and Boris Yeltsin, aimed to “encourage scholarly research in the fields of culture… and the development of cultural exchanges in order to promote better understanding of each other’s culture, particularly through [the] organisation of theatrical performances and art exhibitions”. But the war in Ukraine means relations threaten to fall virtually to zero.

“The actions of the Americans [to ‘cancel’ Russian culture] have led to the fact that further preservation of this memorandum simply made no sense,” claimed Russian foreign ministry spokeswoman Maria Zakharova at a press briefing. According to the Interfax website, “the Russian Prime Minister Mikhail Mishustin ordered that the Russian foreign ministry’s proposal… be accepted in order to stop enforcing the aforementioned memorandum.”

Meanwhile, Mikhail Piotrovsky, the director of the State Hermitage Museum in St Petersburg, continues to describe it as “a global museum”, but one he believes can exist on its own. “We are the world,” he says. In a chilling interview in June with Rossiyskaya Gazeta, a Russian government newspaper, he uses convoluted historical analogies to state his support for the “military operation” (he had until then avoided commenting directly on the invasion). Russian media reported afterwards that the culture ministry had ordered a freeze on all loans from Russian museums in early March, and plans to resume sending works only to “friendly countries” in 2023.

Crucially, recent statements and directives by both US and Russian officials appear to indefinitely preclude any new institutional cultural exchanges until the invasion ends and, from the Russian perspective, until sanctions are lifted. US-Russian cultural relations, however, were already delicate.

In 2010 US-Russia relations had taken a turn for the worse when a US court ruled that Russia must transfer the state-held Schneerson Library, a collection of more than 60,000 books and religious texts seized by the Red Army after the Second World War, to the Brooklyn-Based Hasidic Jewish community, Chabad. The Russian government has since halted loans of art and artefacts from state museums to the US, citing fears that they could be seized as collateral.

“There have not been any exchanges of works of art between Russia and US institutions for at least ten years, because the Russian Ministry of Culture no longer recognises US immunity from seizure,” Gary Tinterow, the director of the Museum of Fine Arts, Houston, tells The Art Newspaper. “Thus, the recent developments have little to no impact on what was already the status quo for museums.”

The invasion of Ukraine has complicated this situation, however. Three Chabad rabbis are on a list of Americans, issued in May, now banned from entering Russia. Soon after, the Smithsonian Institution’s international relations office circulated a letter advising “employees and affiliated persons” to follow State Department and White House guidance on winding down “all direct communications and collaborative work, research, programmes or projects with Russian government-affiliated counterparts”. Projects that began “prior to Russia’s further invasion of Ukraine in February 2022 may be concluded”.

The guidance does not preclude contact with Russian non-governmental organisations (NGOs) and private citizens, but the threat of repression in Russia makes foreign contacts increasingly dangerous. CEC ArtsLink, a New York-based organisation that runs extensive exchanges with Russian individuals and NGOs, says: “It is critical that we maintain contact and engagement with independent artists from Russia and Belarus who oppose the war and stand for individual freedom, whose voices are silenced or suppressed.”

The organisation will “protect the identities” of participating artists due to the threat of persecution and will continue to hold events online to broaden access. It will also “prioritise support for Ukrainian artists and arts leaders” both in Ukraine and in neighbouring countries where they have taken refuge, “particularly Bulgaria, Hungary, Moldova, Poland, Romania and Slovakia”. Based on US Embassy safety warnings, CEC ArtsLink in-person exchanges, which brought US artists to Russia, have been suspended.

A lengthier statement from the Museum of Modern Art (MoMA) in New York stressed that working relations with Russian institutions are a long way off. “MoMA strongly condemns Russia’s invasion of Ukraine. The museum is horrified by the loss of innocent people’s lives. MoMA has suspended all activities involving the Russian Federation and its supporters until further notice. We believe in the power of cultural exchange and hope that when peace and safety are restored to the people of Ukraine, it may be possible for us to work together again.”

US museums specialising in Russian art and history are facing particular dilemmas. “With one big bang, everything that was built during the last 30 years is more or less destroyed,” says Simon Morsink, the newly-appointed director of the Museum of Russian Icons in Clinton, Massachusetts. “The friendships, the relationships between museums, cultural relations, between people, business [have ended]. It’s hard to believe. Of course, it will affect the Museum of Russian Icons as well.”

The Museum of Russian Art (TMORA) in Minneapolis, however, is already seeking out new opportunities. The museum was founded by Raymond Johnson, an entrepreneur who built up a vast collection of Soviet art that attracted the attention of Russian museums and oligarchs. Especially valuable are works by the artist Geli Korzhev—some of which he still owns, others of which he donated to the museum—that portray the trauma of the Second World War in a way that is far removed from today’s glorification of the war by the Kremlin.

Johnson tells The Art Newspaper that he wants Korzhev’s works and the rest of his collection, which includes a significant number of Ukrainian artists, to serve as a teaching collection. “If ever there was a time when this period, the Soviet period, should be studied in depth, this is it”, he says. Immediately after the invasion, TMORA painted a Ukrainian flag on its façade and its website opens with a statement condemning the invasion. Mark Meister, the museum’s director, also emphasises that TMORA deals with the art and culture of all of the countries that made up the former Soviet Union. “Russia is an overarching term for us, it’s not an exclusionary term,” he says, noting that, in his years as director, the museum has “shown as much if not more Ukrainian art than Russian art”.

The Zimmerli Art Museum at Rutgers University, New Jersey, has the largest collection of Soviet non-conformist art in the world, thanks to donations from Norton Dodge, an economics professor who travelled frequently to the Soviet Union, and his widow Nancy Ruyle Dodge. Russian museums, including the Garage Museum of Contemporary Art in Moscow, have requested loans in recent years, but these could not be granted.

“It is really bad for culture, both for Russian institutions and for us, because we cannot really showcase our collection to the most interested audience,” says Julia Tulovsky, the Zimmerli’s curator of Russian and Soviet Nonconformist Art. A substantial grant programme funded by the Trust for Mutual Understanding, a non-profit in New York, that was to bring curators from Russia to the Zimmerli was halted due to the Covid-19 pandemic. “We hoped for the situation to change for the better,” Tulovsky says.