Home News Collage Artist Jean Conner Says She Has No Idea Why She Chooses... 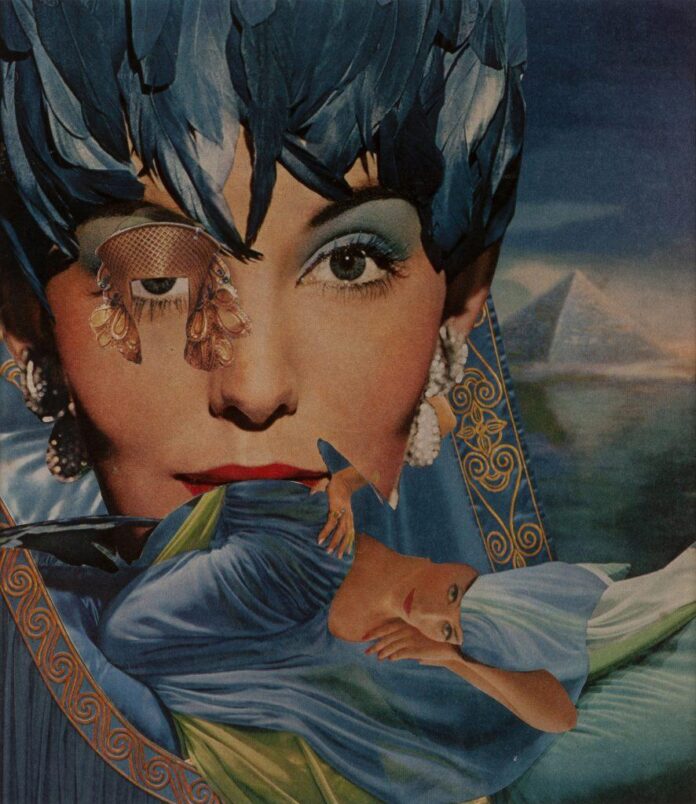 It took some six decades, but artist Jean Conner has finally made her solo museum debut, with not one but two exhibitions in California’s Bay Area.

The 89-year-old artist, who was born in Lincoln, Nebraska, in 1933, has called San Francisco home since 1957, immediately following her marriage to Bruce Conner, the late artist and experimental filmmaker who died in 2008.

Her work is now being celebrated with a show of 78 collages made between 1957 and 2021 that reveal her mastery of color and composition (as well as her sense of humor) at the San Jose Museum of Art, alongside a concurrent exhibition at the Marin Museum of Contemporary Art presenting a broader array of media, with over 60 pieces including paintings and drawings.

To mark the dual shows, we spoke with Conner, who has works in the collections of such august institutions as the Whitney Museum of American Art, the Los Angeles County Museum of Art, and the San Francisco Museum of Modern Art, about her life and career. 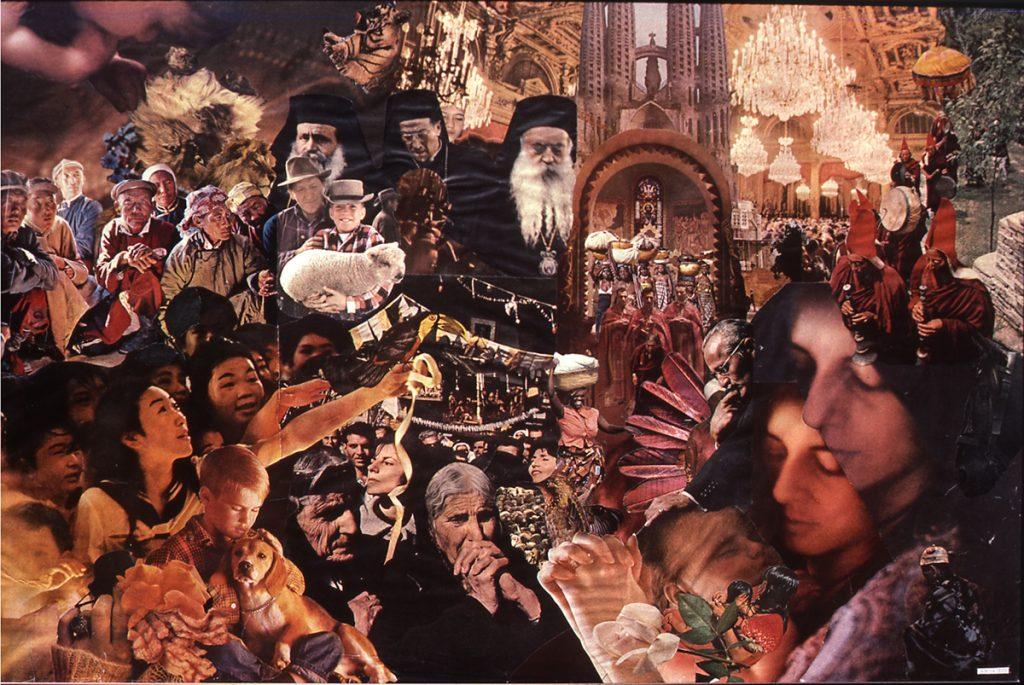 What are your earliest memories of making art? Did your parents have an interest in art?

I did my first painting when I was eight years old, in third grade. The teacher had set up an easel in the front of the classroom with tempera paints and brushes. I painted a Madonna with a poinsettia flower.

I remember my father taking my sister, brother, and me to the university museum, and we walked down a hall lined with white plaster replicas of sculptures. I recall and the . I also remember in fifth grade going to a show at the museum and seeing a Peggy Bacon painting of a cat on a fence.

What made you decide to study art in college?

I didn’t decide to study art in college. Everyone in the family decided that was what I was going to do. I had taken art classes at the University of Nebraska on Saturdays when in junior high school. I also took an art class in eighth grade, and when I began an art class in ninth grade, the eighth grade art teacher asked if I would assist her with the eighth-grade class, which I did.

The professors at the university were mostly young men. Even though some of them were married, they taught in the day and came back in the evenings to use the studios to work on their own art. They welcomed any students who wanted to drop in. I never did, but some of my friends who lived near the campus did. I lived with my parents five miles away by city bus. 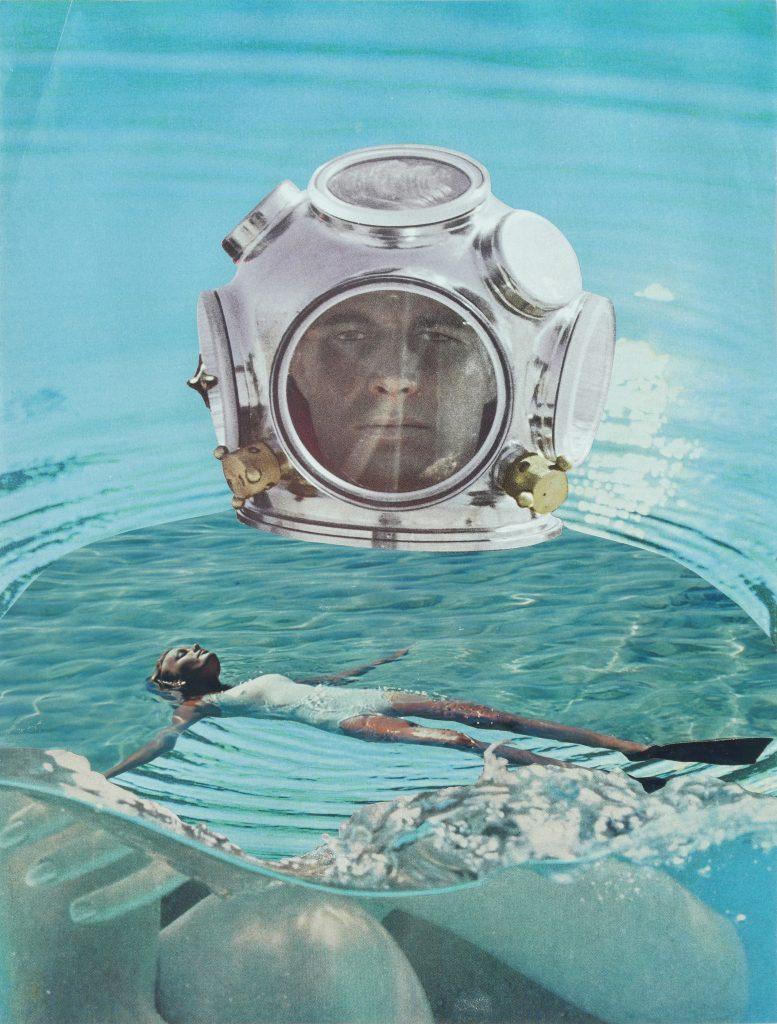 The San Jose show highlights your collage works, and you and Bruce had a joint collage show at American University in Washington, D.C., and the Sonoma University Art Gallery in 2015 and 2016. Who started doing collage first?

Bruce died before the joint show was ever thought of. Our work wasn’t shown side by side, but in alternating groups. It was like two different shows, one in color, the other in black and white, all in a huge space. Definitely two different shows.

I don’t think either of us started collage first. Bruce did a lot of assemblages. It just happened that we both were doing collages in black and white at the same time. I decided then that I would do color. Bruce is the black-and-white person. We didn’t influence each other. I used scissors and he used an X-Acto knife for cutting. We both used YES! Glue. 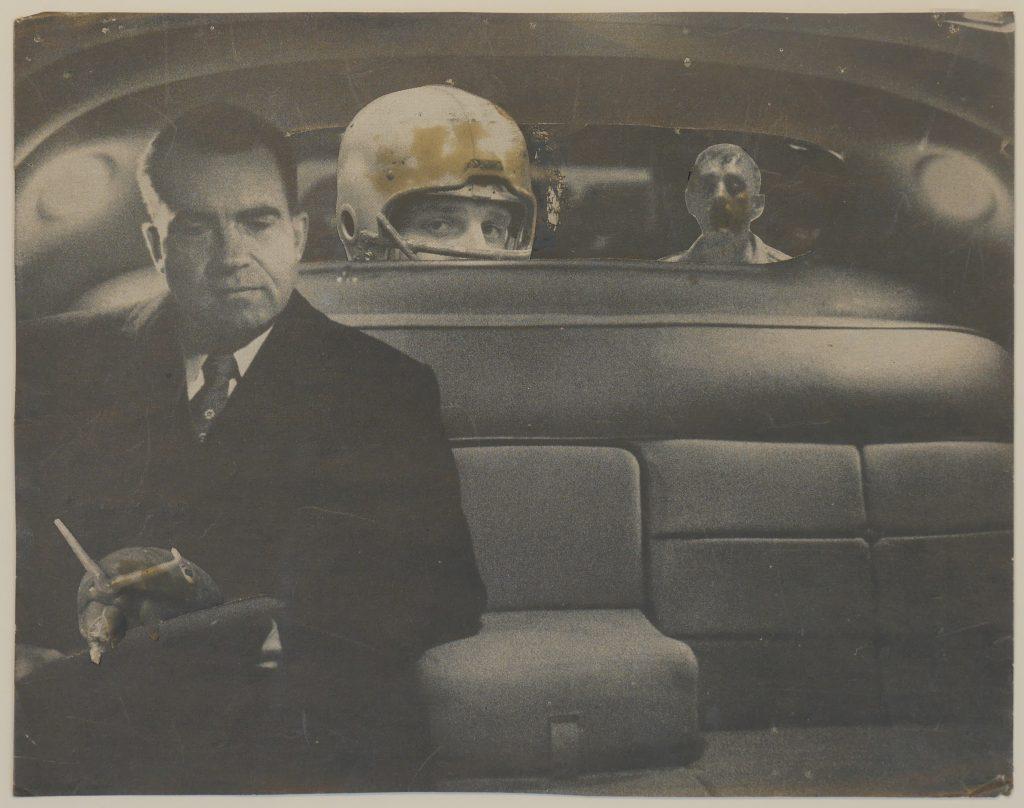 How much did the 19th-century Victorian craft traditions of collage inform your work? Were you consciously trying to reclaim a practice that had been relegated to the realm of “women’s work” as a “proper” art form?

The 19th-century Victorian work never influenced my work. I never saw any. But when, in the development of the San Jose show, I saw the exhibition catalogue for “Cut and Paste: 400 Years of Collage” [at Edinburgh’s National Galleries of Scotland, in 2019], I was surprised to see that some of the things I did in my work had been done by the Victorians.

You told the that you did collage in part because “it was easy to work a short time then pack it away.” I’ve heard from other women artists for whom textile work was attractive for similar reasons. Was it difficult to make space and time for your work?

It was not difficult to find space or time to do work. I had a drawing table of my own and worked small. Time? Do I want to spend the time reading or doing my work? 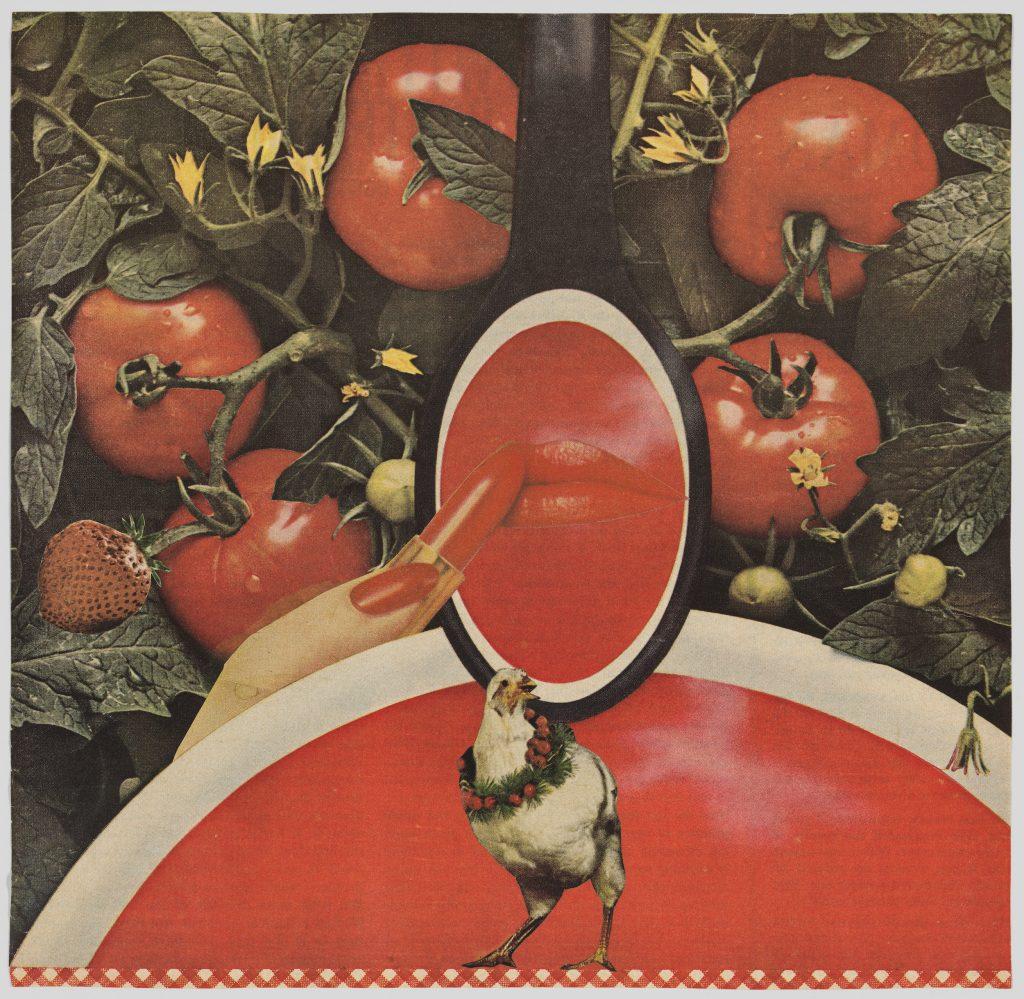 Working with large-format color magazines as and , what attracts you to an image? Do you feel like you are subverting the original meaning of these images, especially the ones that feature traditional depictions of femininity, often as a means of advertising?

I have no idea why I pick certain images!

Do you still work with the same vintage source materials, and have they become more difficult to obtain? 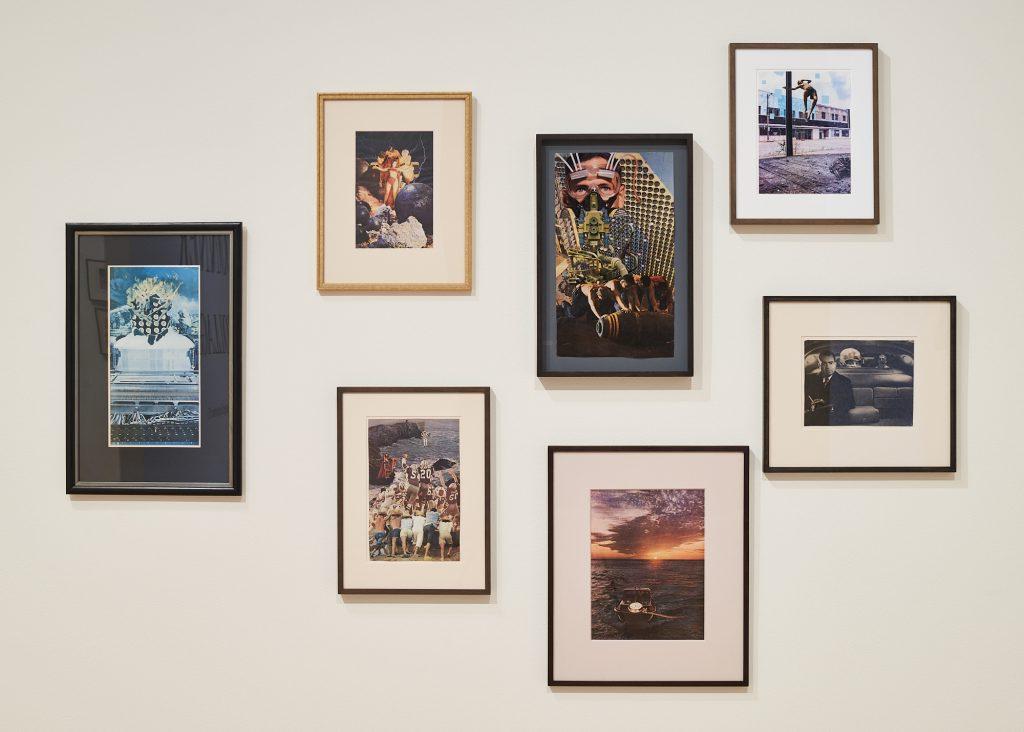 You met Bruce during college. What was your first encounter like, and how did you start dating?

Bruce had been at the University of Nebraska for a year before I met him. His friends Corban Lepell and Audrey LePell decided we should meet. So a movie date was arranged after summer vacation. I had heard a lot about him from art teachers but was not impressed on first meeting him. I gather he felt differently.

How did you two decide to get married and what was the wedding like?

I don’t know how we decided to get married. Bruce’s parents were all for it. Mine not so much… They said that I should finish getting my MFA before getting married, so I did. We both worked the summer before getting married on September 1st, 1959. It was a simple church wedding, mostly family and a few relatives. The wedding was early in the morning. Everyone came for breakfast at my parents house, followed by wedding cake and lots of photos. Bruce’s father gave us a ride to the Omaha airport, and we flew off to San Francisco. 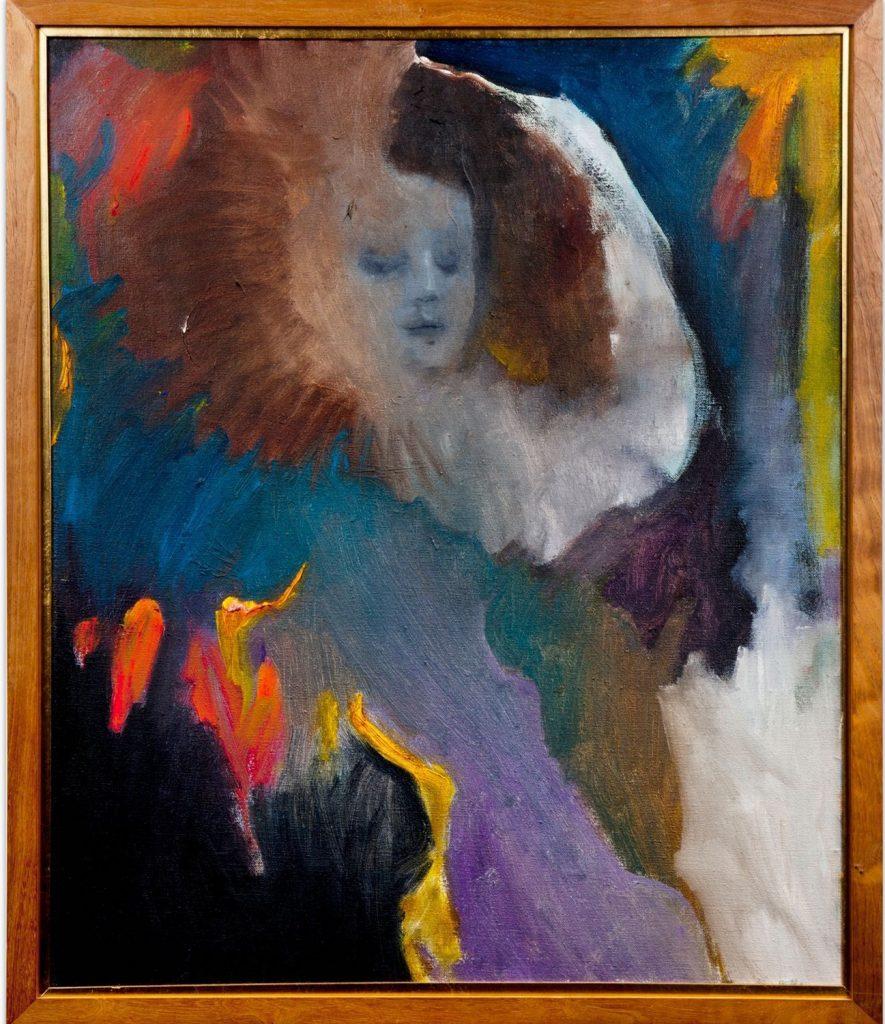 Jean Conner, (1960). Courtesy of the Marin Museum of Contemporary Art.

What was it like being in a two-artist marriage? There is a recurring dynamic with some art historical couples of the wife focusing on supporting her husband’s art career. Did you feel that your career had to remain on the back burner?

Bruce was the money-maker. I was just a back-up, working in part-time jobs. After our son was born, that changed. Bruce didn’t want me working. He often arranged for me to have shows in a library, coffee shop, and bookstore, City Lights [bookshop] twice and three shows at Cafe ?, plus a couple of group shows.

I really didn’t try to get into galleries. I was invited to join a women’s gallery, but felt it wasn’t for me. Paule Anglim told me she liked my work but, since Bruce was in her gallery, she wouldn’t show it. She said she once had a husband-and-wife couple in her gallery which didn’t work out. Evidently the experience was so bad, she didn’t want to go through it again. 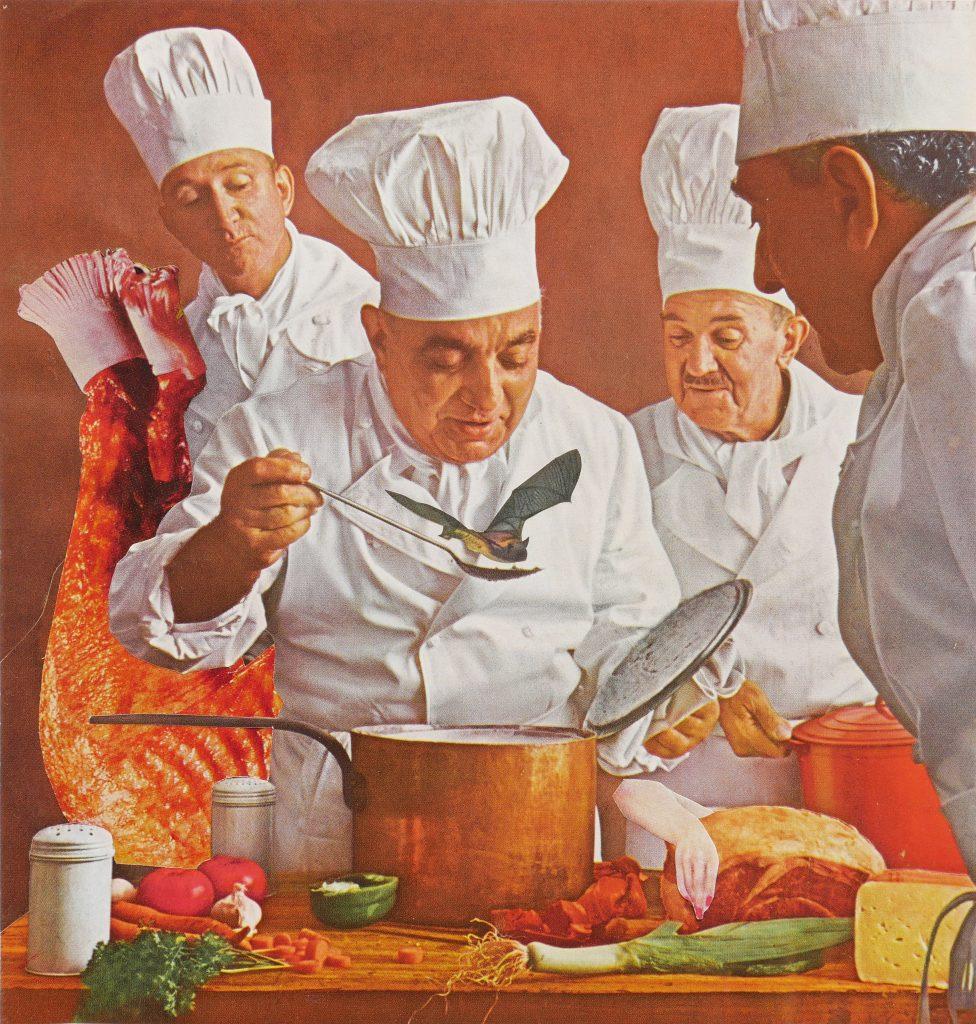 You have one son, Robert. Did you have any concerns about becoming a mother while maintaining your art practice?

Robert and I did a lot of art together. Bruce arranged a family show one time at the Braunstein Gallery, which then traveled to Los Angeles. Robert had more sales than Bruce or I did.

How does it feel now to have this showcase at the San Jose Museum of Art?

It feels really great to be showing at the museum. When I saw the large space they planned to have my work in, I said, “I don’t think this will work. My work is too small. It won’t look good.” I was wrong. They did a great job! 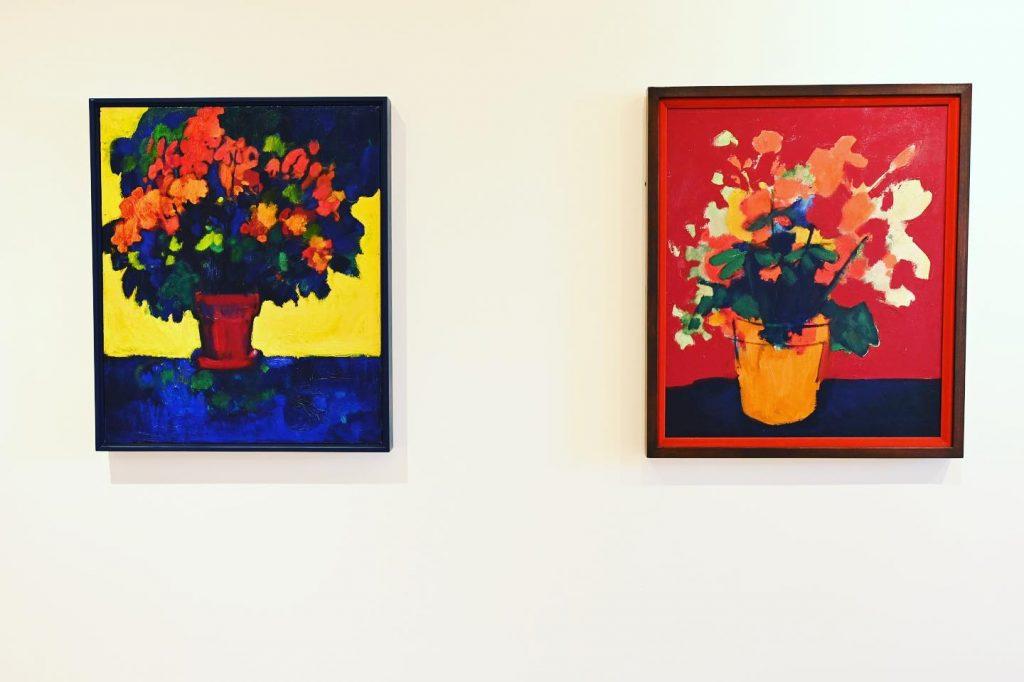 What was the most rewarding thing you’ve experienced in your career?

The most rewarding thing is having these two museum shows and having people come tell me how they enjoy them or talk about a certain work that they like. I feel that the show at Marin MOCA looks very good. It has a really nice feeling. I wish it could have shown more of my work, such as prints and ceramics, but it is a nice, comfortably sized exhibit, and I feel people who usually don’t go to art exhibits will find something there that they will like.