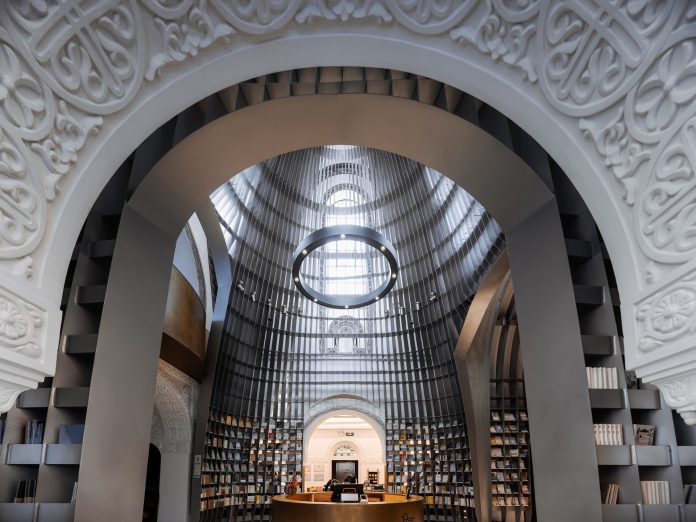 Peer inside Shanghai’s St. Nicholas, an Orthodox church from 1932, and you won’t see pews or traditional iconography. Thanks to architectural firm Wutopia Lab, the renovated building now serves as a shrine to verse. Titled “Church in Church,” the 388 square-meter structure holds Sinan Books Poetry Store, which boasts more than 1,000 volumes written in multiple languages. They’re displayed on steel shelves weighing 45 tons that contrast the ornate facades, high archways, and ceiling-bound frescoes of the original architecture.

In a conversation with ArchDaily, Wutopia Lab said the Chinese city’s mandates to preserve historical features restricted the project. The result is a light-filled space for Shanghai’s poetry community.

It should have an independent spirituality and should not be based on the religion of the old site. Given the fact that the dome could not be transformed, I used bookshelf to create a new structure as a Church in the old building Church. This is ‘Church in Church,’ a sanctuary for modern people was born in where once a sanctuary of faith.

For shoppers who need a snack after browsing, there are two cafes on the east and west sides of the building. For more of Wutopia Lab’s poetic designs, head to Instagram. You also might like these similarly transformed bookstores in the Netherlands and Buenos Aires. (via Trendland)