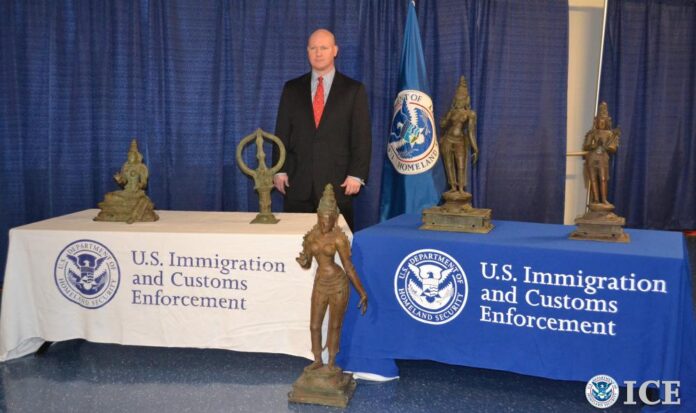 Disgraced antiquities dealer Subhash Kapoor was convicted of burglary and the illegal export of 19 antique idols today in a trial court in the town of Kumbakonam in the Indian state of Tamil Nadu, according to the news agency PTI (Press Trust of India) as well as detailed social media posts. Kapoor received a ten-year prison sentence while five accomplices were also sentenced to various, lesser jail terms.

Kapoor, who is a US national, was detained by German police in late 2011 at an airport in Cologne, after an international arrest alert was issued by the agency Interpol. He was handed over to Indian authorities in July 2013, and subsequently extradited to India and held at the Central Prison in Trichy, while awaiting trial.

At that time, authorities alleged that Kapoor had kept around $100 million worth of stolen art in storage facilities. Thousands of artifacts and artworks have been recovered since his initial arrest.

Meanwhile, beginning in 2019, U.S. authorities, including the current District Attorney of New York, Alvin Bragg, have doggedly pursued Kapoor in their own investigation, focusing on hundreds of works that passed through Kapoor’s New York gallery, Art of the Past.

Less than two weeks ago, hundreds of stolen antiquities worth an estimated $4 million were returned to India by Bragg’s office, in a ceremony at the Indian Consulate in New York. More than 235 objects have been seized as part of the investigation into Kapoor as well as others tied to convicted traffickers Nancy Wiener and Nayef Homsi.

“These antiquities were stolen by multiple complex and sophisticated trafficking rings,” D.A. Alvin Bragg said in a statement at the time. Bragg’s office did not immediately respond to request for comment on the prison sentence handed down by the Indian court.

According to PTI, in the current case in India, at least 56 witnesses were examined.

Alongside Kapoor, the judge imposed penalties on his accomplices, who included Sanjivi Asokan, Marichamy, Packiya Kumar, Sri Ram alias Ulagu and Parthiban. The crew was convicted under various sections of the Indian Penal Code, including for criminal conspiracy.

The Indian prosecution unit known as Idol Wing “has obtained a befitting conviction for Subhash Kapoor, and six co-accused in… commissions of offences of burglary and illegal export of 19 antique idols,” according to posts by Vijay Kumar Sundaresan and the archaeology blog Chasing Aphrodite on Twitter. “The Idol Wing has never before witnessed such a record number of convictions since its establishment.”