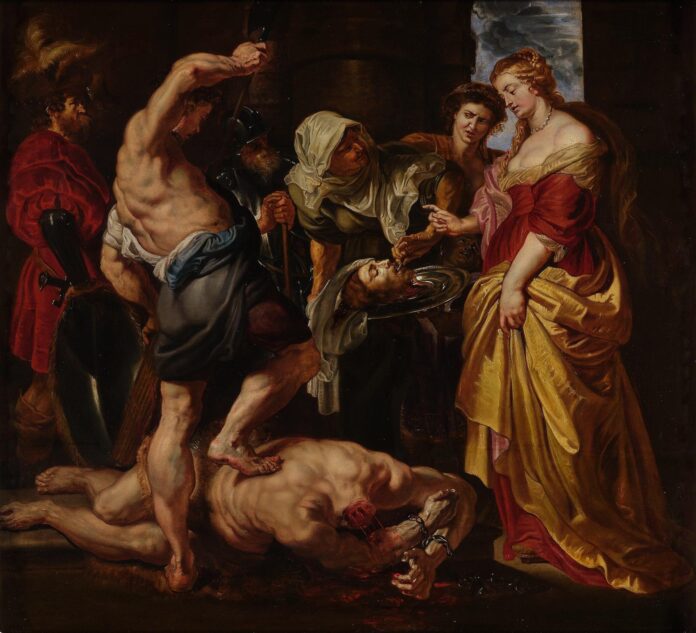 Modern and contemporary works have taken up most of the oxygen at Sotheby’s and Christie’s of late, but the former has lined up a significant collection of ten pictures for its upcoming Master’s Week auction on 26 January 2023, led by an early Peter Paul Rubens painting it expects to fetch between $25m and $35m.

Such a result would represent a five-fold increase from its previous appearance at public auction, following its rediscovery in 1998, when Salome presented with the severed head of Saint John the Baptist (around 1609) sold for $5.5m, also at Sotheby’s in New York, at the time a record sum for the Flemish Baroque master’s work at auction. That figure has since been surpassed ten times, most famously just four years later when the monumental The Massacre of the Innocents (around 1609-11) fetched an astounding £49.5m at Sotheby’s in London. (That work is now in the collection of the Art Gallery of Ontario.)

The Salome presented with the severed head of Saint John the Baptist coming to auction in January—an exceptionally bloody rendering of the Biblical beheading scene painted by so many Old Masters—was exhibited at the National Gallery in London in the early 2000s and then was included in the gallery’s exhibition Rubens: A Master in the Making in 2005-2006. The painting is, according to Sotheby’s head of Old Masters in New York Christopher Apostle, “in so many ways epitomizing the very essence of the Baroque”. Its return to market comes with the endorsement of Keith Christiansen, the Metropolitan Museum of Art’s former chairman of the department of European paintings (now curator emeritus), who said in a statement, “Rubens’s depiction of the beheading of Saint John the Baptist, painted after his return to Antwerp, is a work in which the still young artist fearlessly explores the violent and sexual dynamics of the Biblical narrative like some pre-cinematic Martin Scorsese. It’s the kind of painting that, once seen, you won’t forget.”

Christiansen may have had many occasions to examine the painting up close, as its sellers are retired real estate mogul and Met trustee Mark Fisch and his estranged wife, former judge Rachel Davidson. The two are embroiled in a complicated divorce, in which the fate of their art collection, valued at $177m, is a major factor.

Ten works from that collection will be the star lots of Sotheby’s marquee Master’s Week sale and, in addition to the Rubens, standouts include a tenebrous Penitent Saint Mary Magdalene by Orazio Gentileschi (est $4m-$6m) and an early Baroque painting by Valentin de Boulogne, Christ Crowned with Thorns (around 1614, est $4m-$6m), which last changed hands at auction in 2016, also at Sotheby’s, fetching a record $5.2m. Another important, rediscovered work in the group is Georges de la Tour’s apostilic portrait Saint James the Greater (est $3.5m-$5m), which was long believed to have been lost until its emergence in 2005.

Paintings from Fisch and Davidson’s collection are on view until 27 October at Sotheby’s New York headquarters, then will go on view there again 4-13 November during the house’s previews of its major November sales, before touring to its facilities in Los Angeles, Hong Kong and London.

How Much Is Really Available at an Art Fair? Dealer Thaddaeus Ropac on the Myth, Machinations, and Methods Behind Pre-Selling