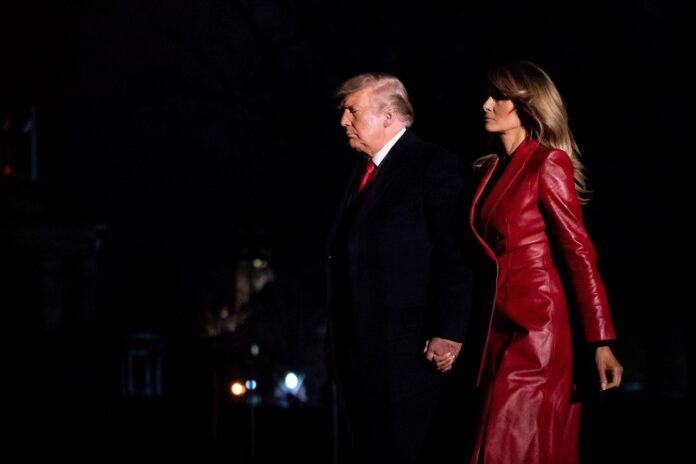 Whereas hundreds of donors—including celebrities John Legend, Steven Spielberg and Chrissy Teigen—footed the bill for his predecessor’s portrait, Donald Trump’s own political action committee, the Save America PAC, will cover most of the costs associated with commissioning portraits of the former president and former first lady Melania Trump to hang in the Smithsonian’s National Portrait Gallery (NPG).

According to recent Save America financial disclosures reviewed by Business Insider and the Washington Post, the PAC contributed $650,000 toward the portraits, while another donation of $100,000 from an undisclosed donor will provide the rest of the funds required for the commissions. Save America and other Republican PACs have amplified their fundraising efforts and brought in record sums since the FBI’s 7 August raid of Trump’s Mar-a-Lago home and resort in Florida.

Artists have been selected to create the Trumps’ portraits, but their identities have not yet been revealed and a timeline for the portraits’ creation and unveiling has not been announced.

Trump, before becoming president, infamously spent $600,000 of his charitable foundation’s money on a portrait of himself by painter William Quigley at the Art Hamptons fair in 2013, according to testimony by his former lawyer Michael Cohen. The former president’s taste in art stretches from contemporary figuration back at least as far as French Impressionism; he has claimed that a replica of Pierre-Auguste Renoir’s painting Two Sisters (On the Terrace) (1881) hanging in Trump Tower is in fact authentic, even though the original belongs to the Art Institute of Chicago.

Speculation about who Trump might pick to paint his NPG portrait has often included John McNaughton, a painter who is staunchly conservative in both his aesthetics and his politics. In fact McNaughton’s oeuvre already includes countless paintings of the 45th president—including him clutching a tattered flag in a stadium, leading a group of former presidents dressed as commandos, guiding a boat carrying his political allies through “the swamp”, as a racecar driver and even as an artist about to reveal his latest painting.

While the NPG’s commissioned Trump portrait is still in the works, the institution showcased a recently acquired portrait of the former president by photographer Pari Dukovic when it reopened in May 2021.

The Trumps’ predecessors, Barack and Michelle Obama, commissioned Kehinde Wiley and Amy Sherald, respectively, to create their NPG portraits. Those works, unveiled to great fanfare and viral delight a little over a year after Obama left office, are currently on a national tour of major museums—following a recent stint at the de Young Museum in San Francisco, the portraits will go on view at the Museum of Fine Arts, Boston on 3 September. Some 300 donors contributed the $750,000 fee to commission the Obamas’ portraits.

The NPG portraits are the most prominent paintings of former US presidents—a practice dating back to 1994—but each president and first lady is also immortalised in a painting that hangs at the White House. On 7 September the Obamas will return to the White House for their portraits’ unveiling; the identities of the artists will also be revealed at that time.