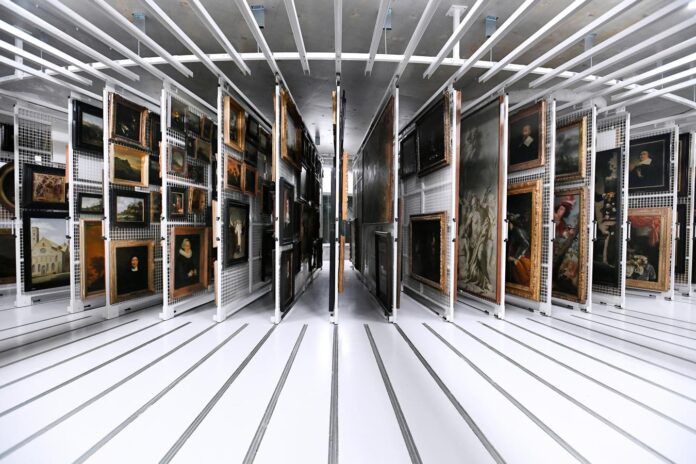 The Depot, built in 2004 in the city’s museum park, is adjacent to the Boijmans Van Beuningen, which is currently closed for renovations and is expected to open in 2028.

The Depot was designed by the Rotterdam-based architecture firm MVRDV. It is a 167,000-square-foot circular building with a glass façade that allows the institution to display its entire collection, rather than storing much of it off-site in warehouses, as most art institutions around the world now do.

Boijmans Van Beuningen Director Sjarel Ax and Ina Klaassen said that the opening of this collection is very important. Works of art created by artists and designers are an important part of people`s thinking and acting.

This new tool, this new typology, helps to preserve and discover these treasures. The idea to create the Rotterdam art space as an accessible warehouse came about after the basement storage facilities of Boumans Van Beuningen in his current home became unusable as a result of frequent floods. Subsequently, the funds of the museum were transferred for storage abroad.

Rather than being organized by artist, era, or genre, as the galleries of the Dutch art museum’s permanent collection would likely be, the items stored in the Depot are stored in five different climates depending on their environment. Most of the objects are also stored to take up a minimum of place in the Rotterdam art space.

At Depot Boijmans van Beuningen, artworks hang from movable shelves or shelves, and some are displayed in 13 floating glass display cases in the atrium. Prints, drawings, and photographs are stored in flat files and are available for viewing on-demand.

In a statement, Sandra Kiesters, Head of Collectibles and Research, said that at the Depot Boijmans van Beuningen, the visitor is encouraged to understand what collecting is in different ways and to be proactive about the collection, and share their own knowledge of collecting. She also added that choice and discrimination is human process, driven by emotion and driven by knowledge.

Visitors can now see each and every one of the 151,000 items in the museum’s collection of the Dutch art museum. Designed by MVRDV, it resembles a mirrored bowl, has a green area on the roof, and has five different climatic conditions inside to preserve different types of art.

There are photos of the design on the Designboom website. Boijmans director Cjarel Ax told AFP that it is “the only fully accessible depot, a public depot open in the world.” In an interview with the Guardian, MVRDV founding partner Winy Maas called Depot Boijmans van Beuningen “Noah’s Ark.