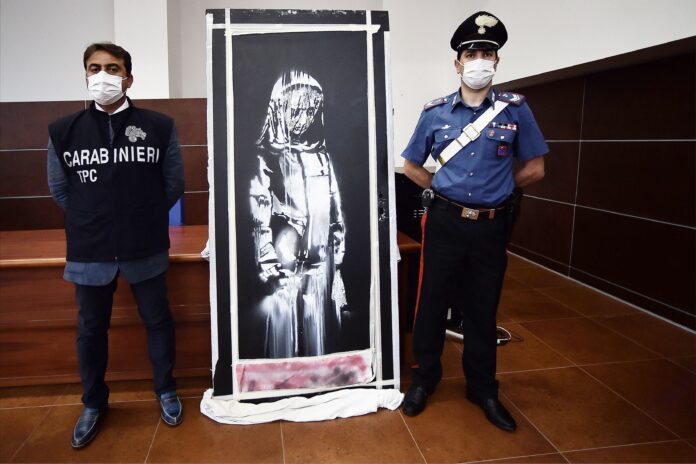 Eight men have been convicted of stealing a mural painted by the secretive artist Banksy on an emergency exit door at the Bataclan concert hall in Paris. The “sad girl” image by Banksy was stencilled as a tribute to the 90 people murdered in a 2015 terror attack on the concert venue.

The theft occurred in January 2019 and the mural was found by authorities over a year later at a rural farmhouse in Sant’Omero in Italy. According to the BBC, seven French men and an Italian, aged 31 to 58, were given jail terms ranging from a few months to four years although parts of the sentence will be served wearing electronic tags rather than in prison.

The criminal court in Paris rejected allegations that the lottery millionaire Mehdi Meftah was the mastermind behind the theft though he was among the eight men found guilty and was given a three-year jail sentence. Meftah’s lawyer, Clarisse Serre, confirmed that that “the court did not consider Meftah to be the mastermind behind the theft and sentenced him only for his role [in relation to] the theft”.

According to the Telegraph, Meftah told the court that he had no idea about the removal of the mural until two of the thieves turned up at his door with the Banksy work, telling them: “What do you want me to do with it?”

During the trial, Bataclan staff said the theft sparked “deep indignation”, adding that the painted door was a “symbol of remembrance that belongs to everyone, locals, Parisians, citizens of the world”.

Music That You Should Listen To If You Love Art

What is Digital Art