Home News Even With Seven-Figure Sales, Sanity Prevailed During an Un-Frenzied VIP Preview at... 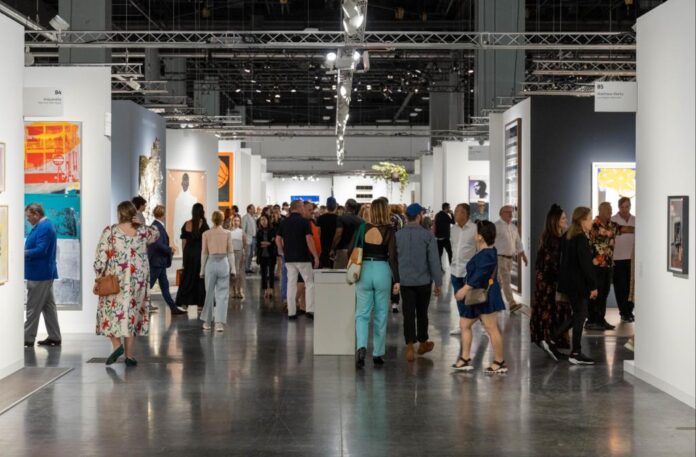 This morning’s press conference at Art Basel Miami Beach, held as the fair prepared to open its doors to crowds of VIPs and the press, was not just business as usual, although the typical line-up of city officials and top collectors and patrons was, of course, in attendance.

A good portion of the remarks focused on the fact that this is the fair’s 20th edition and that success in Miami had been anything but guaranteed when a Florida edition of the Swiss fair was first introduced in 2001. Indeed the fair has met challenges ranging from its cancellation in its first year due to the 9/11 terrorist attacks, to the impact of hurricanes on both the city and the convention center site, to the outbreak of the Zika virus in 2016, and of course, the recent worldwide disruption caused by the Covid-19 pandemic.

“Twenty years ago, South Florida was in the ‘Miami Vice’ era,” said outgoing Art Basel CEO Marc Spiegler. “The cultural ecosystem was vastly less developed than it is now.” He went on to say “this was not a layup” in terms of getting the fair to be a permanent fixture on the global art calendar. Now, he said, it’s “the most important fair in the most important market in the world.”

The other main point of focus for today’s conference was Spiegler’s impending departure from Art Basel and the fact that Noah Horowitz is returning to fill the CEO role after a brief stint at Sotheby’s. Each praised the other’s contributions to the Basel fairs over the years. Spiegler has not yet announced his future plans.

Spiegler also pointed out that owing to pandemic-related issues, this is the largest edition of the Miami fair to date, as Art Basel allowed some longtime exhibitors to take a one-year break with the promise of returning, even as the event welcomed new exhibitors.

With 282 exhibitors from 38 countries and territories, “We have used every square meter of that hall possible,” Speigler said, which he noted will benefit both galleries and visitors alike.

This year’s opening day felt solid rather than frenzied, a fact underscored by observers even as some galleries shared robust sales. Of course, a certain degree of pre-selling always means a few works are spoken for before they hit the walls and floors of the Miami Beach Convention Center. While the pre-sales seemed slower than usual, remarked art advisor Lisa Schiff, the pace of sales seemed to pick up throughout the day. “More is available than usual. We have been buying, just at a slower pace than normal.”

As questions swirled about whether broader economic volatility and inflation are impacting the art market, Horowitz fielded a related query at the press conference noting, “It’s the million-dollar question,” and adding that we’ve seen “market cycles” before.

Has Sanity Returned to the Art Fair Scene?

Art dealer Alex Benrimon, who was visiting but not exhibiting at Art Basel, said that while sales were strong, they seem to be accompanied by more thought than in years past. “People are taking their time and thinking through their acquisitions—a welcome return to buying with their eyes instead of their ears.”

“The mood at the fair matched the art on the walls. The artwork is easy on the eyes, Covid is a distant memory, and people are in great spirits,” said attorney Thomas Danziger, a specialist in art law. “If the opening day is any indication, sanity may have returned to the art fair scene,” he added. 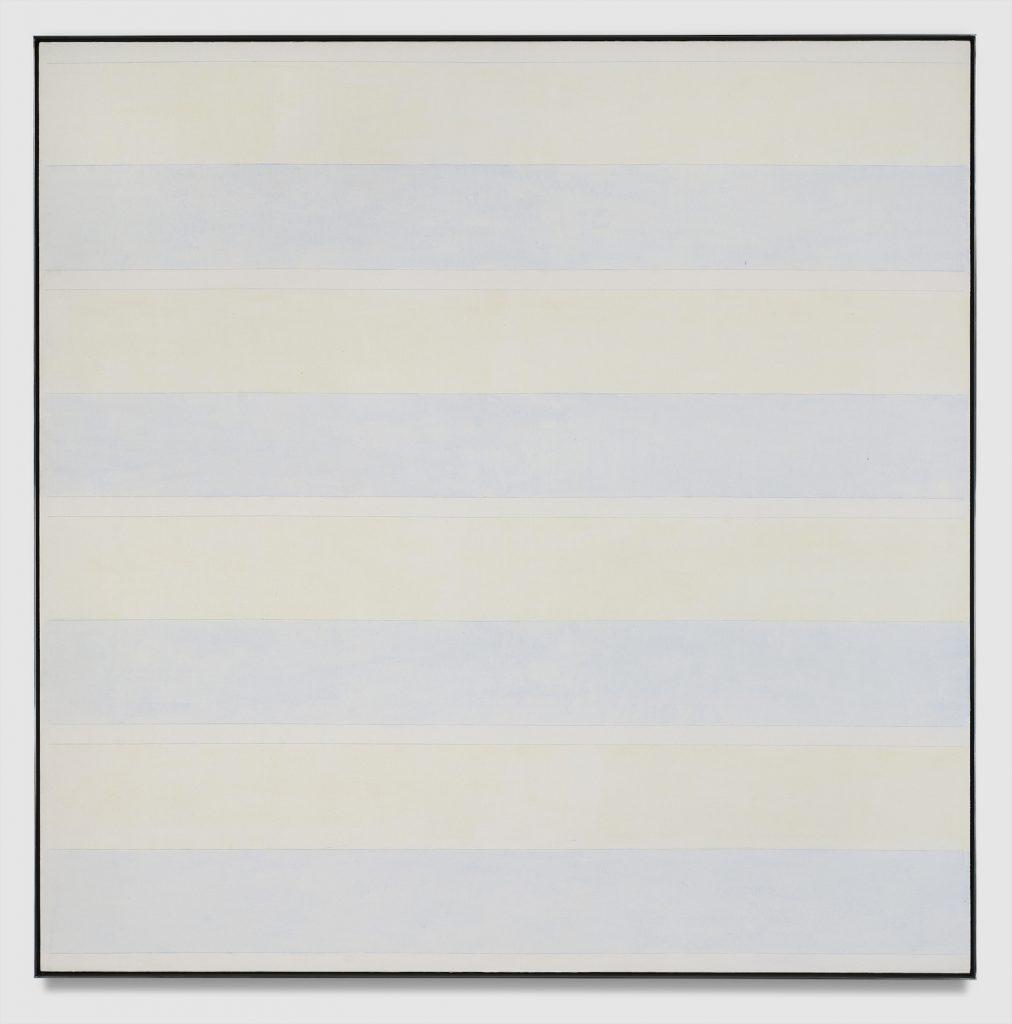 Pace CEO Marc Glimcher told Artnet News: “We came to Miami with a ‘Wait and See’ mentality, unsure of where the barometer of the art market would point amidst wider economic concerns. We’re happy to report that we’ve seen strong sales, including several works over the $1 million mark.

One of those artworks to sell for more than seven figures was Agnes Martin’s (1998), which went for $7 million. Pace also reported selling: an Andy Warhol painting, from 1964, for $3.8 million; , a painting by Brazilian artist Beatriz Milhazes, for $1 million; and (2022) by Loie Hollowell. Hollowell’s first solo institutional exhibition in the U.S. is currently on view at the Manetti Shrem Museum of Art in Davis, California

Lehmann Maupin co-founder David Maupin told Artnet News that Miami “feels particularly global this year—more so than ever before.” Citing strong demand for museum-quality works “from all corners of the world,” Maupin said the gallery placed significant works with collections based in Singapore, London, and Uruguay. “This year, we brought a selection of Lari Pittman’s works to celebrate his newly-opened retrospective at Museo Jumex in Mexico City, as well as Do Ho Suh’s impressive on the heels of his survey at the MCA Sydney. In tandem with the success of our presentation of new works by Alex Prager in our seasonal Palm Beach location, the fair gives us confidence that South Florida is still thriving as an art world capital.”

Italian art dealer Massimo De Carlo, who operates galleries in Milan, London, and Hong Kong, told Artnet News: “The energy is thrillingly smooth so far, and we are very pleased to meet with our local and internal contacts again. Sales on Day 1 are very satisfying, and we were particularly thrilled to present a Kabinett—that is already sold out— dedicated entirely to Austyn Weiner, whom we recently signed with the gallery. Overall, over 15 works have been sold, ranging from $20,000 to $175,000.” 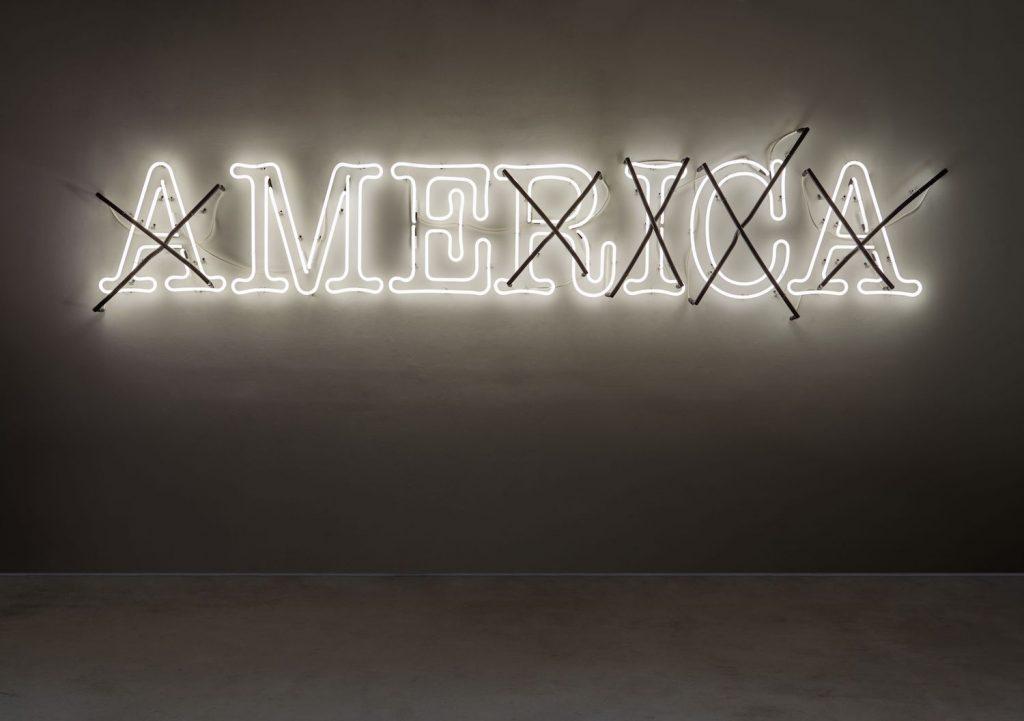 Hauser & Wirth president Marc Payot described the response to the gallery’s curated booth of American “masters,” as “euphoric.” He said the gallery placed more works today than in any previous year of Art Basel Miami Beach. Some works went to major private and institutional collections, he said.

“By mid-day, our sales exceeded $18 million, including a landmark painting by Philip Guston, Glenn Ligon’s powerful new neon , and outstanding new works by Mark Bradford, George Condo, Nicole Eisenman, and Rashid Johnson, among others. Such positive energy at the fair seems a harbinger of great things ahead for the art world in 2023,” said Payot. 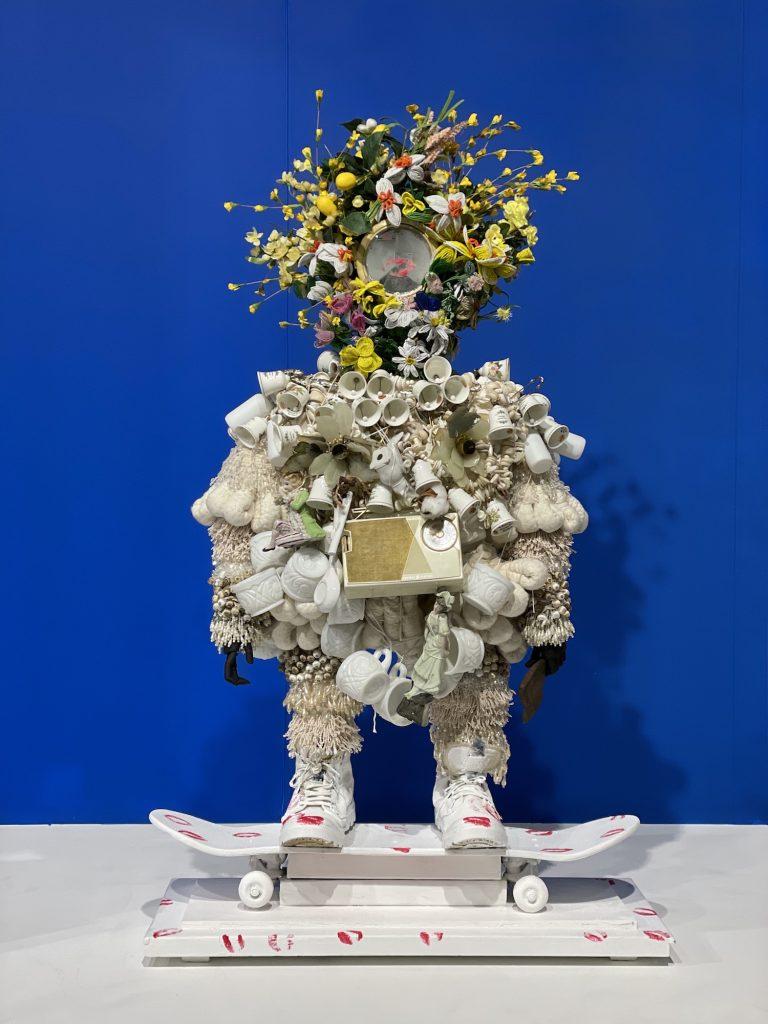 vanessa german,
The Artist Considers The 21st Century Implications of Forgiveness in a time of Forgetfulness (2022). Image courtesy of the artist and Kasmin Gallery.

A sculpture by vanessa german, which the artist finished at the fair by kissing the base while wearing lipstick, was also among the works to quickly find a buyer at Kasmin.

Auction veteran David Norman, who is now a private dealer, was enjoying the A+ quality of the work on view. “I have my own personal metrics I measure a fair by: Do I just glance in a booth and walk by? Do I stop and walk in, and if I go in, do I put on my glasses? I put my glasses on a lot this fair!,” he said. 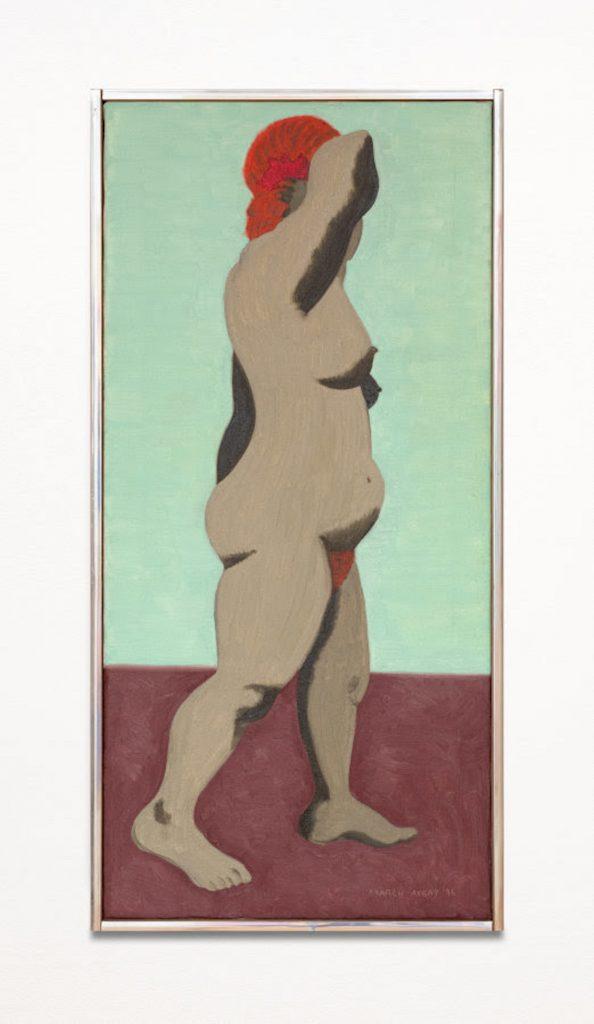 Erdmann sold out his booth of paintings by March Avery, at prices that ranged from $35,000 to $65,000, telling Artnet News he was “overwhelmed” by the response of collectors. “It is so great that these important paintings are now finally being recognized by collectors and institutions alike,” he said. 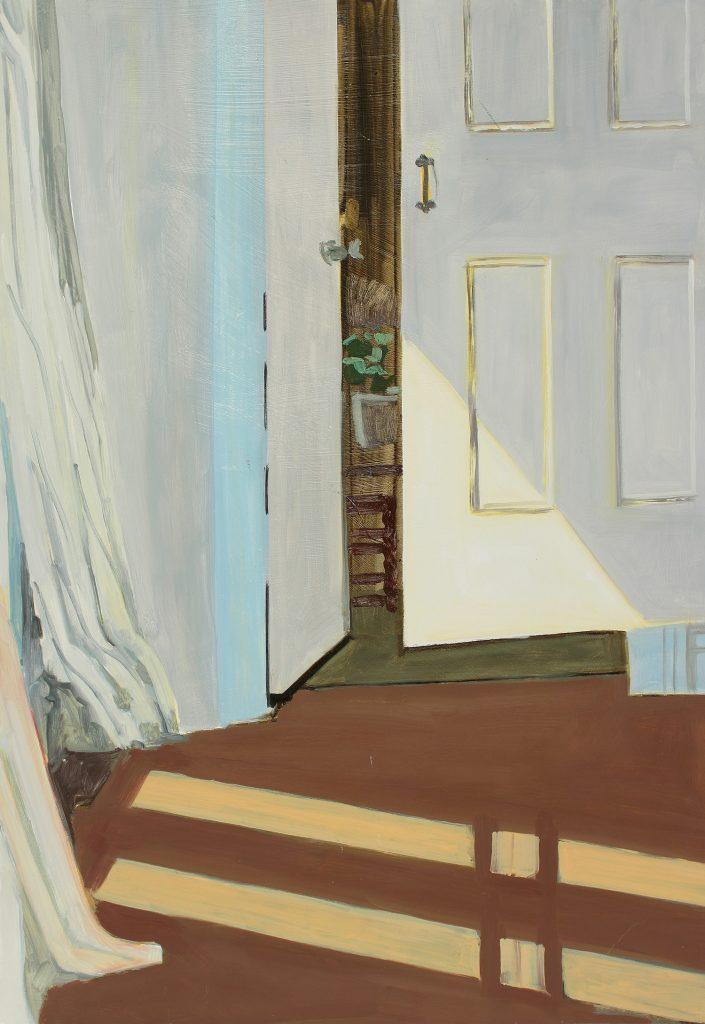 Douglas Walla, the CEO of Marlborough Gallery, said interest in the work of Maggi Hambling, the 76-year-old British painter who was best friends with Francis Bacon and Frank Auerbach, was intense. He noted that the U.S. seems to be catching up to the U.K. in terms of appreciating the artist’s work.

Mega-gallery David Zwirner reported sales, including two new paintings by Katherine Bernhardt, for $250,000 each, with one going to a major European institution; a sculpture by Carol Bove, whose exhibition “Vase/Face” is currently on view at David Zwirner Paris, for $650,000; multiple works by Nate Lowman, who curated a salon-style presentation for Zwirner’s booth, for prices ranging between $100,000 and $350,000; a painting by Oscar Murillo for $400,000; a painting by Rose Wylie, priced at $300,000; and works by Huma Bhabha, Marcel Dzama, Shio Kusaka, and Wolfgang Tillmans.

“The booth was buzzing this morning with almost all works by Pat Passlof and Judy Bowman [finding buyers] as well as a significant work by Joe Overstreet,” said dealer Eric Firestone. “The market continues to strongly support the re-examination of historic American artists that are now being given proper visibility.” He said the works sold in less than two hours after the fair’s opening.

Attorney Danziger summed up what many observers were thinking after the opening day on the fair floor. “As always, Art Basel dealers are saying they are having great success on opening day, and that may even be true today,” he said. “In any event, the frenetic ‘First Choice’ feeling of past years is gone. Today’s Art Basel feels much more like the fairs of years ago, when people actually took time to look at the works, instead of buying first and looking later.”

17 Art Exhibitions Worth Traveling for in Europe This Year, From a Blowout Survey of Yayoi Kusama’s Inflatables to the Largest Showcase of Vermeer’s...