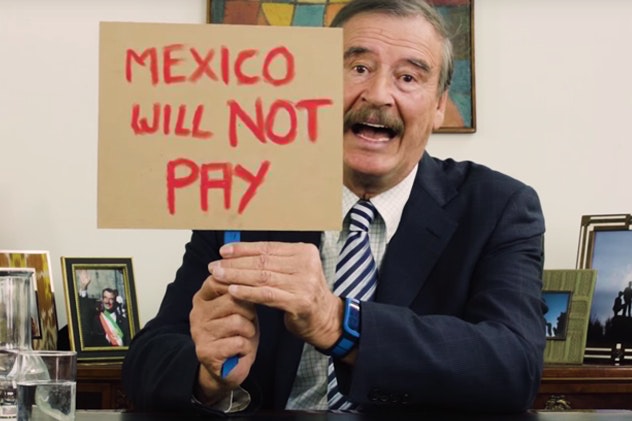 Vicente Fox Quesada tried to explain to the US president all that he thinks about erecting a wall on the border between their countries.

Vicente Fox Quesada, the president of Mexico from 2000 to 2006, recorded a video message to Donald Trump, in which he spoke emotionally about the idea of ​​building a wall on the US-Mexican border. In a four-minute video, Fox Quesada, in a playful manner, tried to convince his colleague that the idea was pointless, Mashable writes.

“Hello, Donald. It’s me, Vicente. As a former president of Mexico, I want to talk directly with you. Because we need to build something between our countries. And I’m not talking about the wall. Donald, we will not under any circumstances pay for this stupid, useless and racist construction, “the ex-head of the Mexican state began his address.

According to Fox Quesada, he has already managed to find in darknet the secret plans of how the Mexicans plan to overcome the wall – with the help of a ladder. “Are you really going to build a wall worth $ 25 billion, through which you can climb the stairs for $ 25? – the author of the appeal is interested. “Let’s be frank, Donald: this wall will not stop anyone who really wants to cross the border.”

Further, Fox Quesada offered Trump a few other, more rational options for how to spend this huge amount, and at the end of the video he took out a picture of a US president. “Do you know who it is?” It’s you. You are up to the moment you turned into yourself, “said the ex-president of Mexico. “Instead of building a wall, Donald, you’d better build a bridge – a bridge in time, walk over it and meet this little boy.”