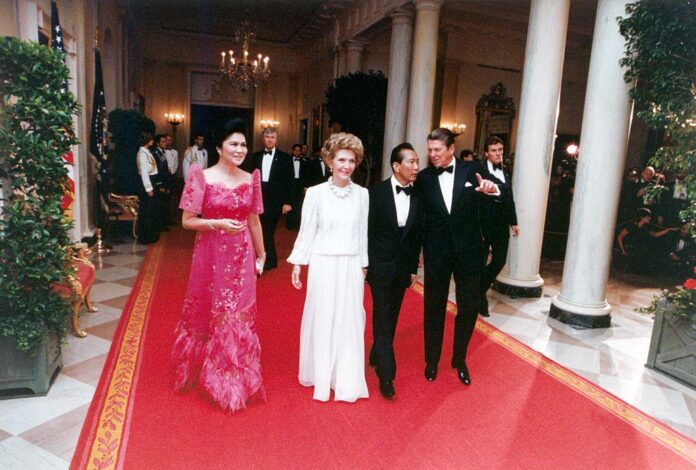 A foreign dictator pleads his case with the U.S. President and fashionable First Lady. Rudy Giuliani weighs in. So does Senator Orrin Hatch. These are not from the top secret documents kept in Mar-a-Lago by former president Donald Trump, but the correspondence of another celebrity-turned-president, Ronald Reagan, drawn from his official archives. And for the Filipino artist Pio Abad, they are a record of how powerful people manipulate public opinion to maintain their status.

The Reagan letters all involve the late Filipino dictator Ferdinand Marcos and his wife, Imelda, who fled the Philippines in the wake of the People Power Revolution in 1986, and found refuge in Hawaii. The texts have been carved onto a series of Carrara marble tablets by Abad under the title “Thoughtful Gifts,” as part of his contribution to the Carnegie International exhibition in Pittsburgh, opening on Saturday, September 24.

“You can see that this wasn’t just a professional relationship,” Abad said of the communications between the two political power couples. “It was a personal one. And I think they genuinely liked each other.”

“Dear Mr. President, I have no other recourse but to write you this letter,” Ferdinand Marcos entreated with Ronald Reagan on October 20, 1988, in a last-ditch effort to avoid racketeering charges brought by Rudy Giuliani, then-U.S. attorney for the Southern District of New York. The ousted dictator wanted the president to personally intervene in the case and allow the Marcoses to prove that the billions in cash, real estate, art, and gems they amassed during their decades in power—some of which they smuggled with them out of the Philippines—were not acquired using stolen funds.

“Imelda sends her prayers to you and Nancy,” Marcos ended his missive. “I remain your obedient servant.” 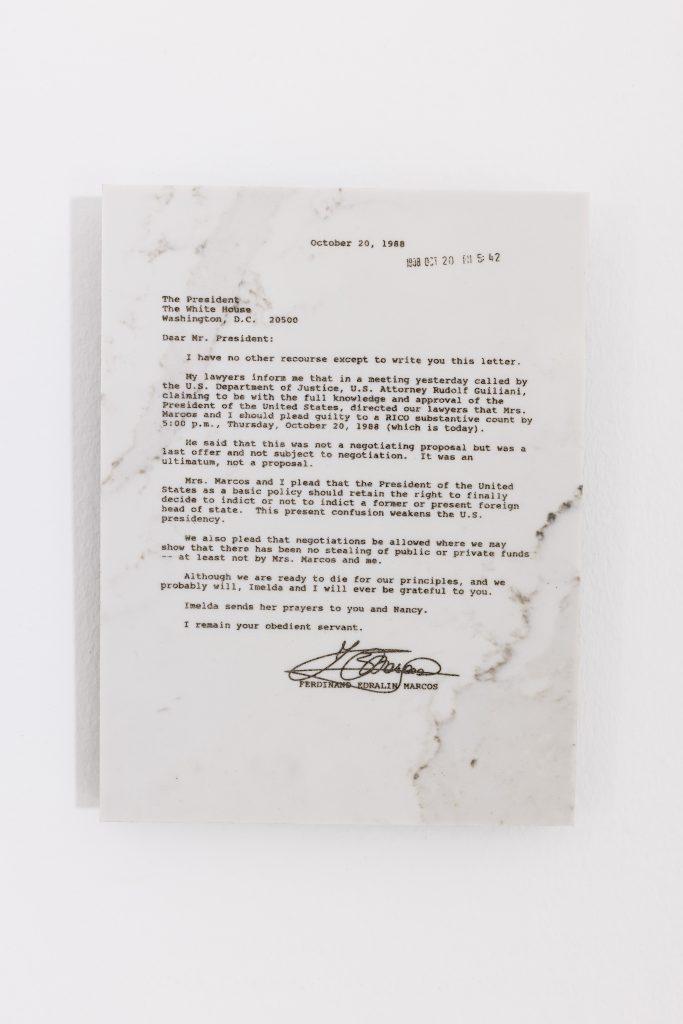 In his reply, penned that same day, Reagan told Marcos that “the facts and circumstances in this case left me no choice except to defer to the Attorney General. I regret very much that this has become necessary but under our system you will have every opportunity to refute these charges.” He ended they note with an assurance that “Nancy joins me in extending to you and Imelda our best wishes.”

A day later, the Marcoses were indicted on RICO charges in New York, and although Ferdinand died just a few months later, Imelda would stand trial in 1990—and be acquitted.

In another letter, presented by Abad as a triptych, Giuliani outlined the evidence against the Marcos family in a dispatch to the Attorney General’s office, following a search of their daughter’s home in California. Giuliani wrote that the assets federal agents seized from the property—including more than 100 works of art and antique furniture—provided “further evidence that the Marcoses have continued to commit crimes and to conceal the fruits of their racketeering enterprise since they arrived in the United States.”

Although Imelda Marcos was acquitted of racketeering, the trove of art that authorities in the U.S. and the Philippines seized was sold at auction in New York in 1991. But hundreds of works acquired by the family using their ill-gotten gains remain unaccounted for, including a Picasso that was spotted on the wall of Imelda’s home during a visit from her son, Ferdinand Jr., after he won the Philippines presidential election earlier this year.

“These letters become portals to the past,” Abad said of the historical documents. “They are also like a palimpsest of how these characters were viewed then and how they are now.” Ferdinand Jr.’s rise to power, for example, largely came through a whitewashing of his parents’ actions during their reign. “The way that political personalities are recycled and reinterpreted throughout history, and the fact that we’re seeing this happen within a single generation, is frightening,” Abad said.

In a further twist of fate, the Carnegie exhibition opens almost 50 years to the day that Marcos declared martial law in the Philippines. 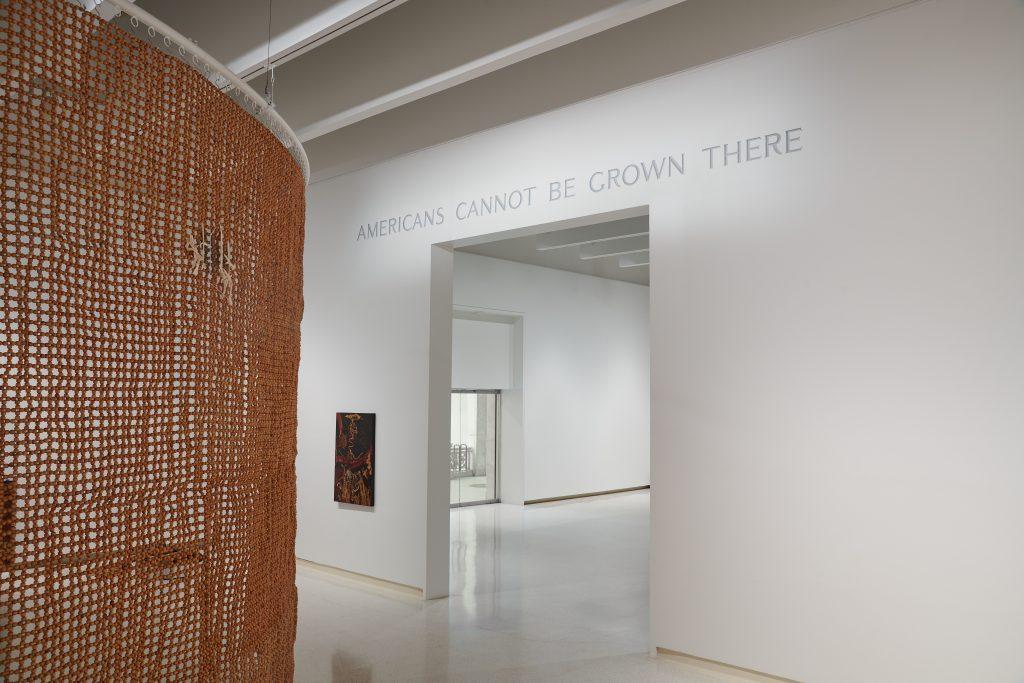 Pio Abad, installation view of (2022) in the 58th Carnegie International. Photo: Sean Eaton. Courtesy of the artist and Carnegie Museum of Art.

Abad’s other work in the exhibition draws on the Carnegie Museum of Art’s own history, specifically its founding patron, Andrew Carnegie. In addition to being a philanthropist and art collector, the steel magnate was—first and foremost—an industrialist.

“Obviously Andrew Carnegie was one of the proponents of public philanthropy instead of paying your taxes,” Abad said. Carnegie was also a vocal opponent to a proposal being floated by the U.S. government at the time to annex the Philippines, even offering to buy its independence for $20 million.

In an essay published in 1898, Carnegie put forward his arguments for why Filipinos should be left to govern themselves. In a telling passage, Carnegie described the Philippines as a nation of “about seven and a half millions of people, composed of races bitterly hostile to one another, alien races, ignorant of our language and institutions. Americans cannot be grown there.”

Abad has taken that last sentence and enlarged it into a wall-sized mural, painted to mimic the neoclassical letters carved on the museum’s façade. The piece is meant to show that the ideological structures that underpin these cultural infrastructures “maybe haven’t really changed,” the artist said.

That does not mean change is impossible, however. “I think we are at a point where a lot of Americans are questioning the myths that they were brought up with,” Abad said. “Beliefs of exceptionalism are being picked apart—rightfully so.”

What Abad wants visitors to come away with from his project is to see that “as much as it’s a geopolitical study, it’s also an obsession informed by personal history. So it’s also universal.”

“It’s a transnational tragedy that touches all our lives, which is ultimately tied to capital or greed or impunity, and the need to transform political fact to personal myth,” Abad said. “Regardless of how distorted it becomes.”