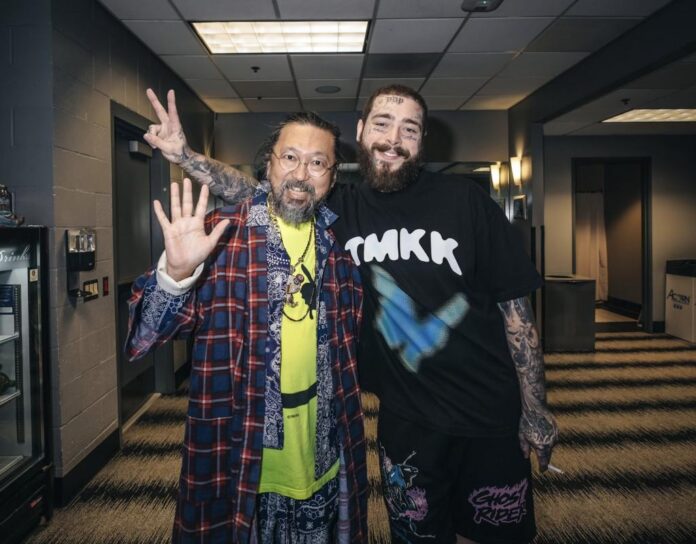 Murakami and Malone celebrated the launch of their collaboration with a round of beer pong. In an Instagram post, NTWRK shared a scene from the game with the caption “dream team.”

Both artists are known for shattering the boundaries of their respective mediums. Formally trained in Japanese painting at Tokyo University, Murakami transformed the ethos of Edo era woodblock prints into his signature “superflat” style of bold outlines and bright colors. Then, he set about dismantling delineations between high and low art, applying his designs to mass market, accessibly priced products.

Post Malone has enjoyed commercial success since hitting the mainstream in 2015 with “White Iverson,” which showcased his knack for moody trap beats. His brand has since expanded beyond music. In May 2020, Malone launched his own line of French rosé wine called Maison No. 9, inspired by his favorite tarot card, the nine of swords. He’s also a co-owner of Envy Gaming, and earlier this year, unveiled a collaboration with the card game .

According to the Economic Times, Murakami started listening to Malone’s music during the pandemic. “It’s mellow, yet the sound is complex,” the artist said. “It’s at the height of hip hop music, yet it’s got a real melody.” 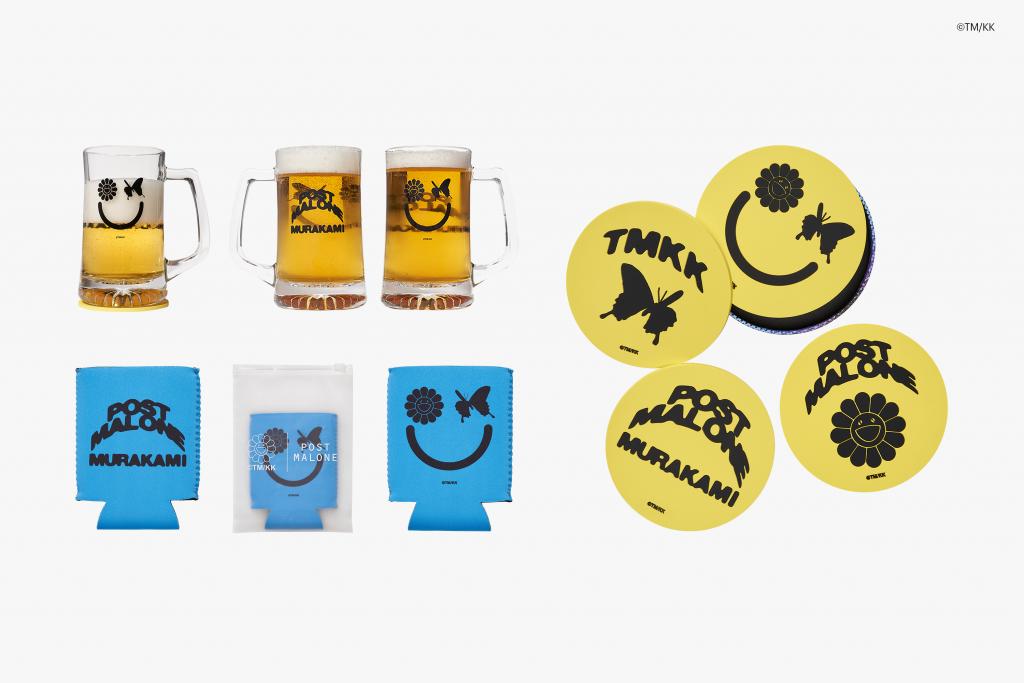 “The two were actually introduced by a couple of my colleagues at NTWRK, only a couple of months ago,” PR director Maddy Fitzpatrick told Artnet News. “Once the ‘connection’ happened, the two were adamant about doing something together. It happened all quite quickly.”

Malone and Murakami selected the collection’s items and aesthetics. Results span hoodies, T-shirts, coasters, and beer mugs emblazoned with both collaborators’ names, their logos forming the capsule’s signature symbol—a smiley face featuring Murakami’s grinning flower and the butterfly from the album cover for its eyes. All TMKK x Post Malone pieces retail between $35 and $135.

“Post Malone isn’t shy to admit that beer is a hobby hence the beer merch,” Fitzpatrick said of the rapper, who isn’t sober, but discussed his struggles with alcoholism on Howard Stern this year. “One can also see that Murakami’s personal style often entails layering streetwear.”

NTWRK is best known for its immersive approach to digital shopping, hosting performances and studio tours alike in tandem with their marketplace’s many drops. No word whether they’ll stage shows online or in L.A., but once this first-ever, limited-edition collaboration sells out, its gone for good.

In a Major Shift, Museums Can Now Use the Proceeds From Deaccessioning for More Than Just Buying Art