Home News Framed by a Painting of the Hudson, the River Is the Art... 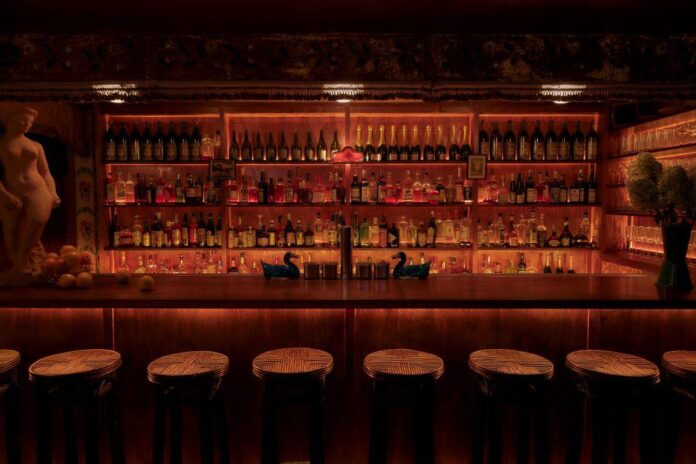 Above the wood-paneled bar at the River, in New York’s Chinatown, amber light casts a glow on a sprawling mural of the Hudson. The oil painting practically envelops the space, wrapping around three of its walls while chronicling the development of New York City, sped up into a day:

An image of a deer looking out over the river, surrounded by green foliage and distant mountains, gives way to signs of agricultural followed by industrial development. Further along, the sky darkens, illuminated by a burning farm and church. It ends with an angular building that recalls the Modernist architecture of Ludwig Mies van der Rohe.

Since opening last spring, the River has become the latest watering hole of downtown New York’s art world. Its crowd spills in from Dr. Clark, the Hokkaido restaurant next door, which, according to co-owner David Komurek, “became a kind of safe haven for a lot of art people during lockdown.”

He helped open the River in part to create a more intimate space for regulars, many of them from galleries like Lomex, Kai Matsumiya, Journal, and Clearing.

The bar’s mural and cozy, quasi-rural, Americana-eclectic interiors were both conceived by co-owners Aaron Aujla and Benjamin Bloomstein, the artists turned designers behind the New York-based Green River Project. Their studio is responsible for the rustic décor of Dr. Clark as well as Bode, the cult-favorite store from menswear designer Emily Bode (who is married to Aujla).

Like the mural, the River’s interior is an ode to old New York and analog America. The bar is full of pastoral references to the city’s past, all the way back to the early Dutch settlements—the chairs are made from a mix of wood salvaged from upstate New York and old Quaker furniture—while a portrait of early Western star Ken Maynard hangs in the hallway, with a bourbon cocktail in his namesake on the menu. 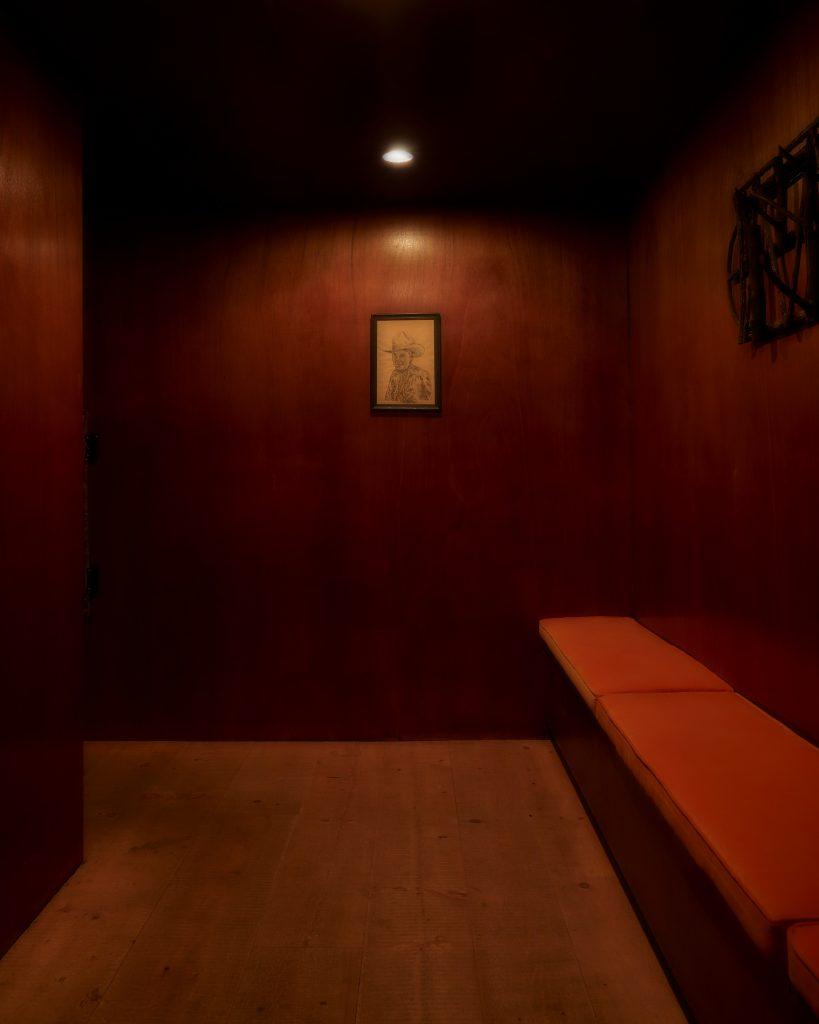 A portrait of the late Western film star Ken Maynard hangs on the wall, by Evans B. Knapp. Courtesy of Green River Project LLC.

The River can be seen as a response to today’s rather sterile, Apple-store-design aesthetic. “Why not look a little bit further back? We take a modern approach,” Bloomstein said, “but use a reference that’s a lot older, to create something new that doesn’t fit in the chronology. It’s more fun.”

The duo met while Aujla, who has a background in painting, was working as a studio assistant for multimedia artist Nate Lowman, and Bloomstein was studying sculpture under Robert Gober. They shared a studio in Bed-Study that they would renovate in between art projects. It was there that they discovered their love for design.

Landscape architect James Rose and sculptor JB Blunk are among their greatest inspirations. Both Rose and Blunk hand-built their homes and studios from found materials and salvaged wood, blurring the line between art and design.

As Bloomstein said, “At a certain point, when is a house a sculpture and when is a sculpture a house?” He and Aujla are interested in creating spaces where the practices intersect. They incorporate oil paintings in every project, and have dreams of designing hotels. 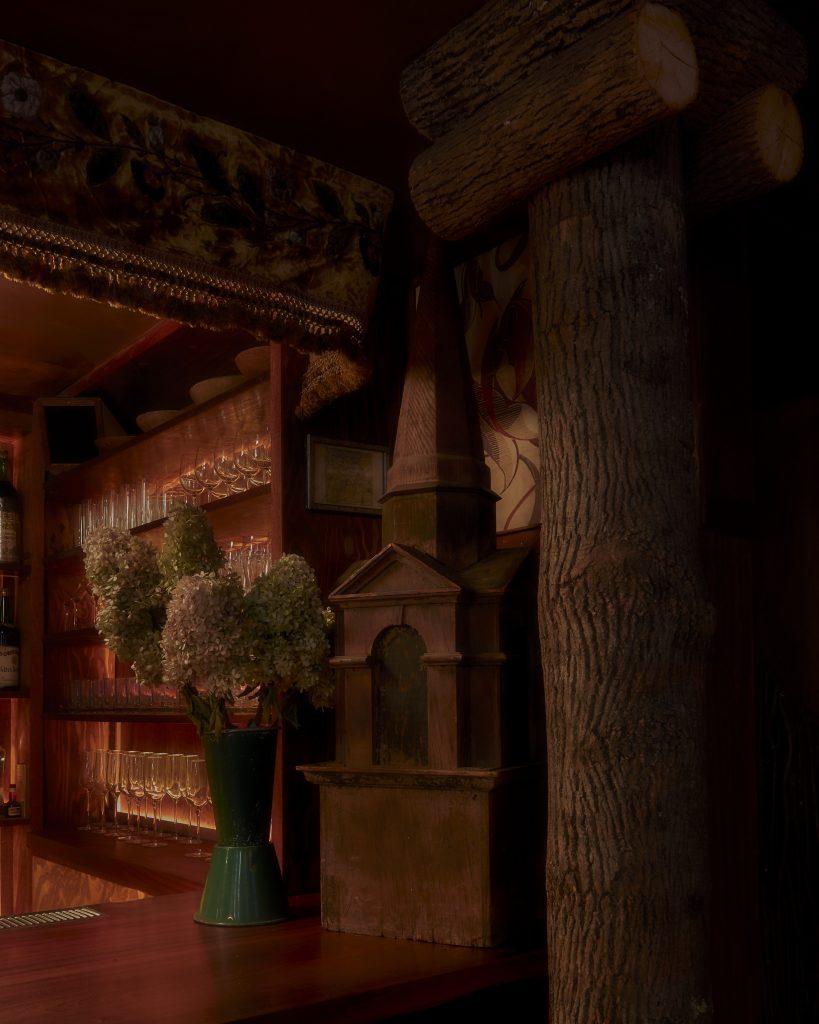 A vintage wooden chapel sourced by Bode sits beside one of an ash tree pillars from the Connecticut property of Bode and Aujla. Courtesy of Green River Project LLC.

For now, the River functions as a sort of (total artwork) combining fine art and utilitarian design traditions, mixed with elements of their personal histories and references to artists like Blunk and Rose. Bloomstein crafted the saloon doors from black birch he found in the woods upstate on his family’s property in Hillsdale, while the large ash tree stumps that frame the bar came from Bode and Aujla’s property in Connecticut.

The bar was basically built by and for their community of multidisciplinary creatives. Bode designed the uniforms, reimagining a sailor-inspired coatdress from the 1960s with a warm brown-and-ecru colorway to echo the palette of the bar.

She also pulled from her personal collection of textile-based objets d’art to decorate the space, using an 1870s embroidered-velvet valance over the bar, while mounting a hand-painted wooden cut-out of a dappled brown horse onto the bathroom wall, below a bolt of painterly cows on canvas.

For two months before the River opened, Aujla and a group of New York artist friends worked on its mural into the early hours of the morning. It’s become an immersive backdrop for a vibrant art scene. 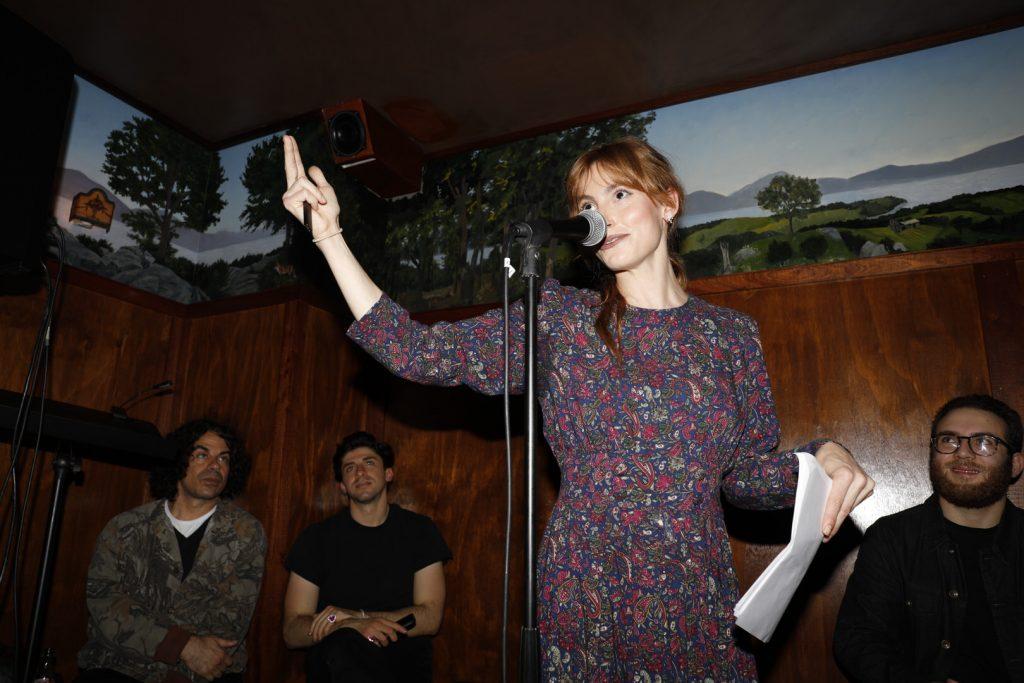 “A big inspiration is Paris Bar in Berlin, which was curated for artists,” said Yasmin Kaytmaz, who runs the River’s day-to-day operations. As an artist herself, she creates large-scale sculptures that incorporate objects she finds in bars as well as everyday restaurant materials, like tinfoil.

Kaytmaz is hardly the only River employee who works in the arts, and on many nights, the bar becomes a de facto performance spot. Its first live show featured experimental jazz group Onyx collective.

The actress and comedian Ruby McCollister occasionally uses the space to test out new material in front of friends. And last month, Dream Baby Press launched a poetry series at the River. The most recent lineup included readings by its co-founder, the interdisciplinary artist and gallery director Matt Starr, as well as the actress Annie Hamilton and No Wave icon Lydia Lunch. 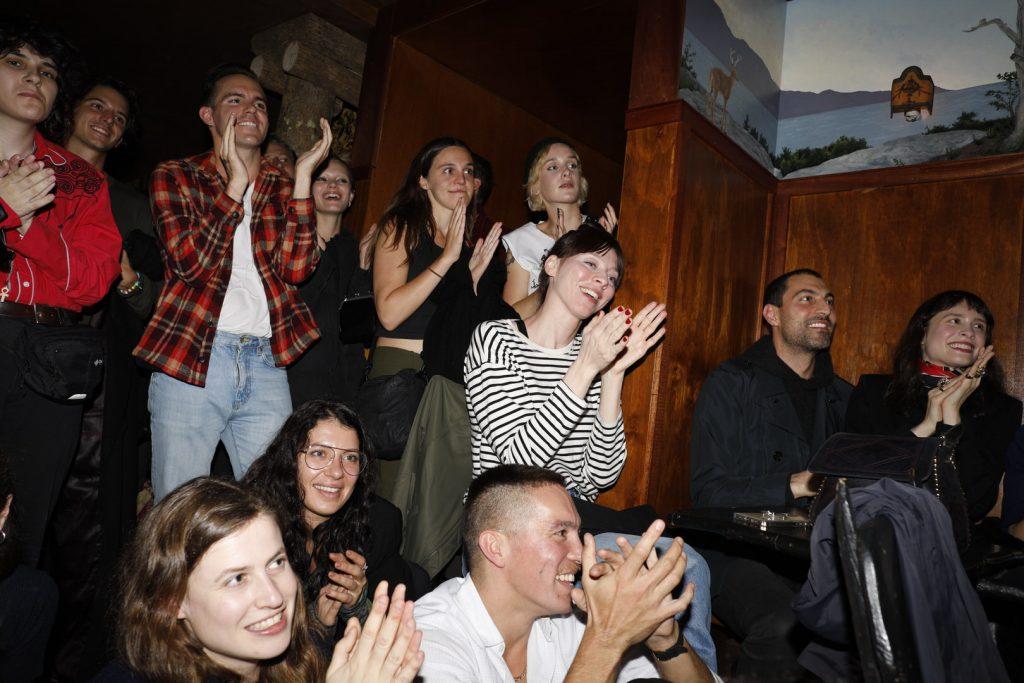 The space is small; it was packed, hot, and sweaty. The first 50 people sat on the floor, and the back of the room was full of people standing.

“It was my first time seeing Lydia perform live. I was sitting in the front row; I was scared; and I was blown away. It was such an amazing, intimate experience,” said Starr. He has plans to host another reading at the River this month.

“At a certain point, the design really becomes a backdrop for the people,” said Bloomstein. His favorite part of the River is the way the patrons’ shoes have stained its floor of rough-sawn pine from upstate with the soot and grime of New York City streets. In just a few months, it is almost black with wear.