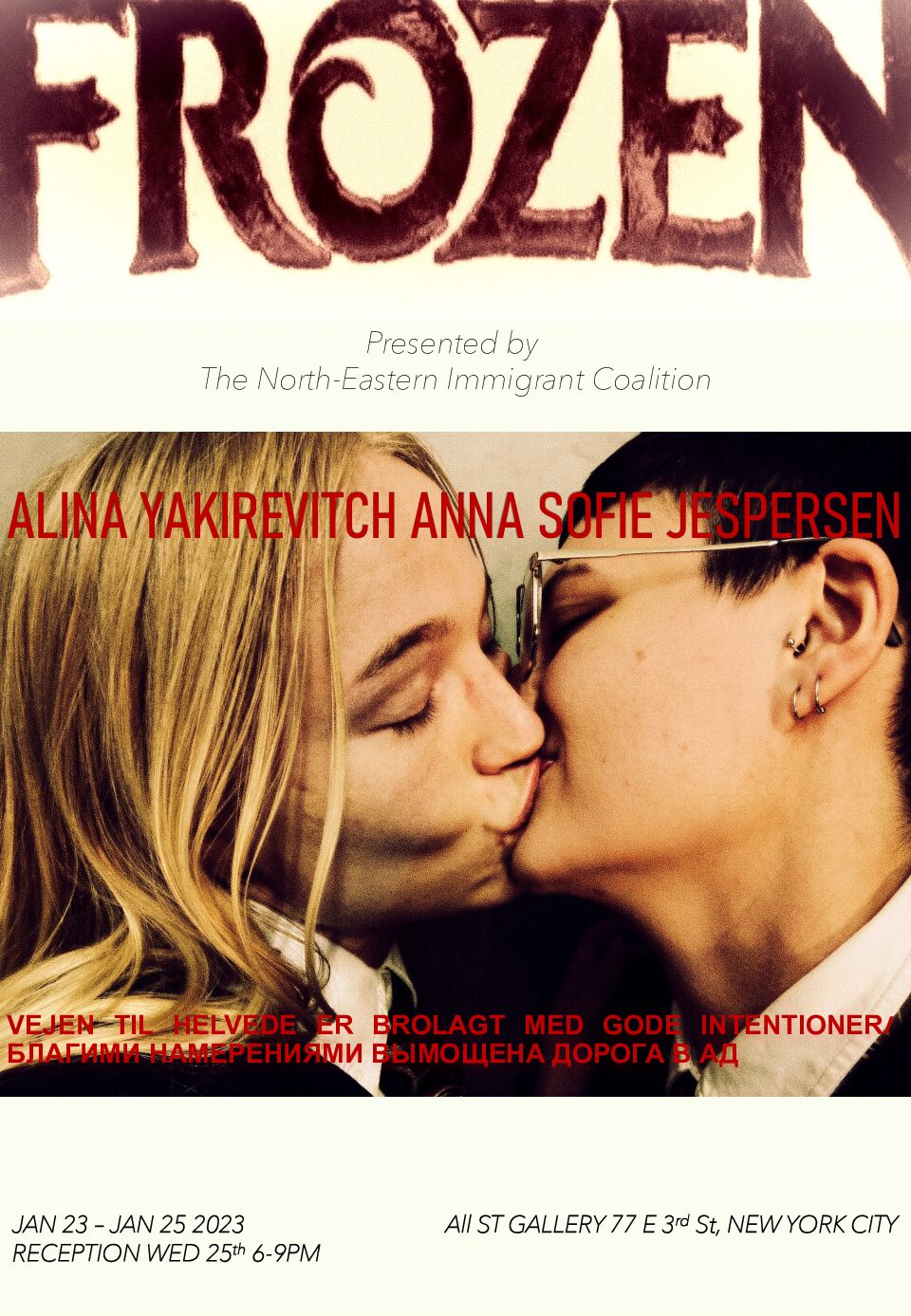 Jan 23 – Jan 25 2023
All St Gallery
77 3rd St, New York, NY 10003
Anna Sofie Jespersen and Alina Yakirevitch have been each other’s critics and friends for nearly half a decade. This show presents recent work by both artists. While in the United States, Danish Jespersen and Russian Yakirevich appear as belonging to opposite cultural blocks, namely the West and the East, the two artists share a fundamental ethnic and cultural likeness.
Sharing an investment in the studies of human consciousness, and in the moral and emotional collisions within society before the rule of law and in pre-colonial history, Yakirevich and Jespersen are inspired by myths and fundamental cultural aspects of their ancestors, in a New York City milieu whose central tenets seem to be binarity. The Nordic myth of the Selkie, the Seal woman, is one that affected both artists
growing up, in its dionysian view of femininity being one of great power, beauty and cruelty. Across the ocean from their birth countries, Jespersen and Yakirevitch are examining anew the historical brutality of their people, together with the endless violence that whiteness means in the United states, the country in
which they are trying to obtain legal status by way of receiving an artist visa.
Yakirevitch’s main piece in the show is Mishka (2022). A typical shrink’s leather chair was stripped of its shell, the leather flattened out on the shipping pad and sewn onto it. The square pad is now populated with geometrical forms, whose shapes were determined by the process of deconstructing the chair. Amid the
leather sheets, the face of a politician on the cover of TIME magazine is peeking out. This project attempts to process the monstrous persona of Vladimir Putin as an archetypal concept, within the context of therapy as a space of emotional and spiritual work, where we face evil as part of the self.
In her piece Batman Orgasm (2023), Jespersen examines her own sexuality through the comic book character Batman, who unlike most superheroes, does not possess any superpowers, but instead relies on his intellect, fighting skills, and gadgets. The piece contains specific reference to the 1995 Tim Burton adaptation Batman Forever, in which the actor Val Kilmer portrays the role of Bruce Wayne.
Yakirevitch is a multidisciplinary artist and writer based in New York. She was born in Russia in the mid 90’s, amidst the transition from failed Communism to radical Capitalism. Awareness of these political systems, the tension between them and the structures of life they dictate, is a core matter in her practice.
The recurring experience of an East to West migration, first from Russia to Israel, then from Israel to the US, informs the political engagement in Yakirevitch’s studio practice. She holds an MFA from Hunter College and works in education and film production. Her works were shown in the exhibition spaces Hauser and Wirth Gallery, New York, Trestle Gallery, New York, and Tel Aviv Museum of Art. Recent shows: What is and What Should Never Be, two person show with Martine Flör at Neuer Kunstverein Wien in Austria,
Little Light of Mine, two person show with Craig Jun Li at P.A.D gallery, New York, and Time Space with Bush Collective, at Edmond de Rothschild Foundation, Tel Aviv, In with the Old: (Nearly) Six Years of Project Art Distribution, Yeh Art Gallery, St. John’s University, New York, and Two Sheets (3) to the Wind, P.A.D gallery and Department of Reflection, NADA Miami.
Anna Sofie Jespersen is a Danish artist who lives and works in New York City. She draws from philosophy, popular culture, cinema and literature to render a Baconesque, radical realism regulated by her nervous system and cognitive association. Her autistic insistence on detail, paired with a chaotic, almost filthy markmaking, collide in oil paintings rooted in the legacy of draftsmanship. About her own work she has said: “I’m
just trying to express my consciousness as accurately as I can: this is how I experienced it, this is how it happened to me. Everything is random and happenstantial. I’m not trying to say anything profound lol”
Jespersen holds an MFA from Hunter College, and a BA from Chelsea College of Art and Design in London, UK. She has showcased her works at exhibition spaces such as Kunsthal Charlottenborg, DK,
Den Frie Center for Contemporary Art, DK, Loam Gallery, NYC, and Salon 8 in Hamburg, DE. In 2021, the artist received the Solo Award at the Charlottenborg Spring Exhibition in Copenhagen, with a following solo
exhibition at Politikens Forhal, DK. She is the recipient of The Elizabeth Greenshields Foundation Grant, The Jerwood Drawing Prize, as well as a Painter-Stainer Scholar of The Painter-Stainers Guild in London, UK.
Frozen will be open from the 23rd to the 25th of January 2023, with a reception on the 25th 6PM- 9PM.